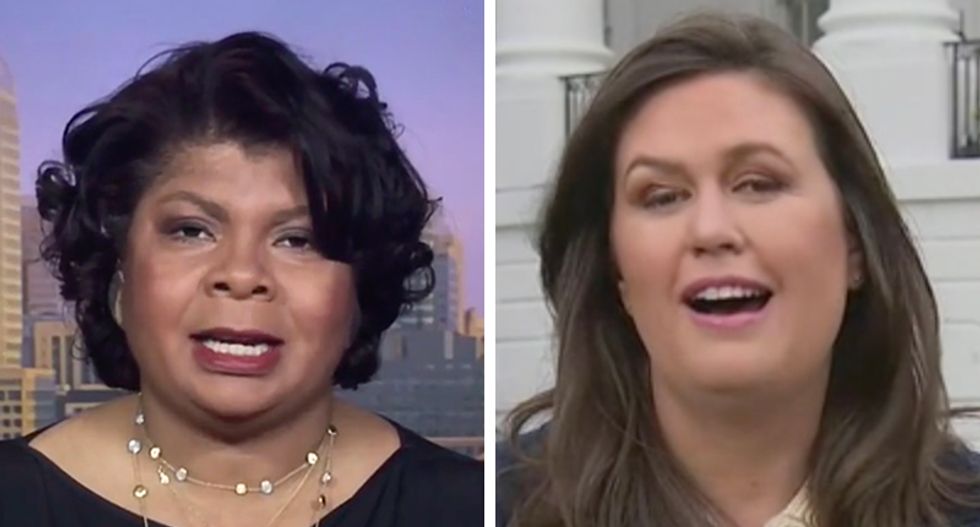 Exposed as a liar by the Mueller report, Sarah Sanders visited Fox News on Monday and continued to lie, this time about CNN reporter April Ryan, who Sanders falsely accused of making death threats. Ryan, clearly speaking metaphorically, said last week that the White House needed to “start lopping the heads off” after the Mueller report showed the depth of incompetence, chaos, and corruption under President Donald Trump’s administration.

“I have had reporters say a lot of things about me. They’ve said I should be choked. I should deserve a lifetime of harassment, but certainly never had anybody say I should be decapitated,” said Sanders, providing no evidence for her claims. In fact Sanders’ father, former Arkansas governor Mike Huckabee, has said Ryan should be “gutted like a deer.”

“It takes us to a new low, even for liberal media,” complained Sanders, as she continued to lie about Ryan. “It once again proves why this journalist isn’t taken seriously.” In fact, Ryan has won numerous awards for her reporting including 2017 “Journalist of the Year” by the National Association of Black Journalists. Earlier this year, Ryan was honored with the 2019 Freedom of the Press Award by the Reporters Committee for Freedom of the Press. Her book about the Trump White House, The Presidency in Black and White is a best-seller.

“I think our team needs to remain focused on how we keep pushing those things that actually help Americans and not engage in these petty fights with journalists that again shouldn’t be taken seriously,” Sanders went on, publicly escalating her petty fight with Ryan.

Reporters like Ryan aren’t “taken seriously” and were simply “looking for couple more minutes on TV,” Sanders said after her already shaky reputation for forthrightness was destroyed, and she stood in front of the cameras and continued to spew word salad as families rolled Easter Eggs behind her on the White House lawn.

Watch the video below, via Fox News.