Mick Mulvaney promises nobody will lose their insurance if Obamacare ends — he's lying, of course 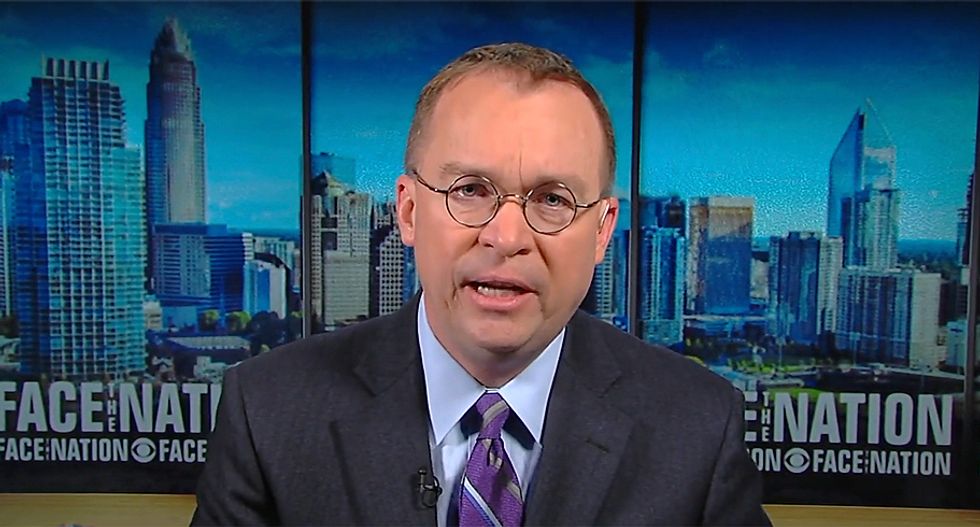 According to press reports, "acting" White House chief of staff Mick Mulvaney is the man most responsible for convincing White House idiot Donald Trump to send out his Justice Department to argue in court that, well, actually, all of Obamacare, every last stitch of it, is now "unconstitutional," because reasons, and needs to be ended immediately. He did so by arguing that the Trump voter base, well-known for being strapping young things with absolutely no health problems at all, would love that he kept yet another of his promises to screw them over personally and collectively. According to Mulvaney, this would allow Republicans to be seen as the "party of health care" when they swooped in to save the day with an as-of-yet unspecified replacement that the party has not been able to craft for a decade, but which surely, surely will be ready to go any moment now.

Appearing on the Sunday television shows, Mulvaney made his case in the manner that every member of the Trump White House makes every case: by brazenly, shamelessly lying. On ABC'sThis Week:

Acting White House Chief of Staff Mick Mulvaney claimed Sunday that if the Trump administration succeeds in striking down the entirety of the Affordable Care Act in court, millions of Americans who have health coverage because of the Obama-era health law will not lose their insurance. But with no clear GOP replacement plan, Mulvaney provided few details on how he could make such guarantee.

By few, read none. Mulvaney asserted that after his administration summarily ends Obamacare, those with pre-existing conditions, those under the age of 26 and on their parents' plans, and those covered by the HealthCare.gov marketplace would all continue to be covered because he says so, that's why. All of those good things would be included in a Republican alternative plan that has yet to be proposed and that quite certainly would not be ready the theoretical day Mulvaney, Trump, and Attorney General Barr got their wish and saw "Obamacare" erased from the books. And even that assumes that Republicans could propose an alternative, despite a decade of furious infighting that has, with every attempt, prevented them from doing so.

A claim that "all" those covered by current law will retain their coverage even as the administration asks the courts to immediately end that coverage—that would be known as a lie. And not the dignified political kind, but the wide-eyed Kellyanne-Conway-after-two-pots-of-coffee version.

Mulvaney was a tea-partying congressman on the far-far-right of his party before being elevated into his current Kushneresque do-all-the-things administration position, and was never subtle in his beliefs that the elite and the corporate of America had better damn well be able to do whatever they want to the rest of country, good and hard, and that everyone else needs to suck up and call it "freedom." Even so, he is being a bit bold here in leading Trump and his party down a path that few elected Republicans want anything to do with. Mulvaney may be only too aware of the average shelf life of a Trump chief of staff, feeling a need to quickly run down his own private wish list before Ivanka gives him one side-eye too many and he, too, is in the unemployment lines.

But everyone (and I mean everyone) in the Republican Party, in the punditry, and in the press knows full well that (1) there is no Republican healthcare plan and (2) every attempt to craft a plan has ended with something measurably worse than the Affordable Care Act, covering fewer people and offering fewer protections due to a single-minded devotion to letting the "free market" decide who lives and who dies based on third-quarter profit needs. Mulvaney's ponies-and-glitter version doesn't exist, and he absolutely knows it.