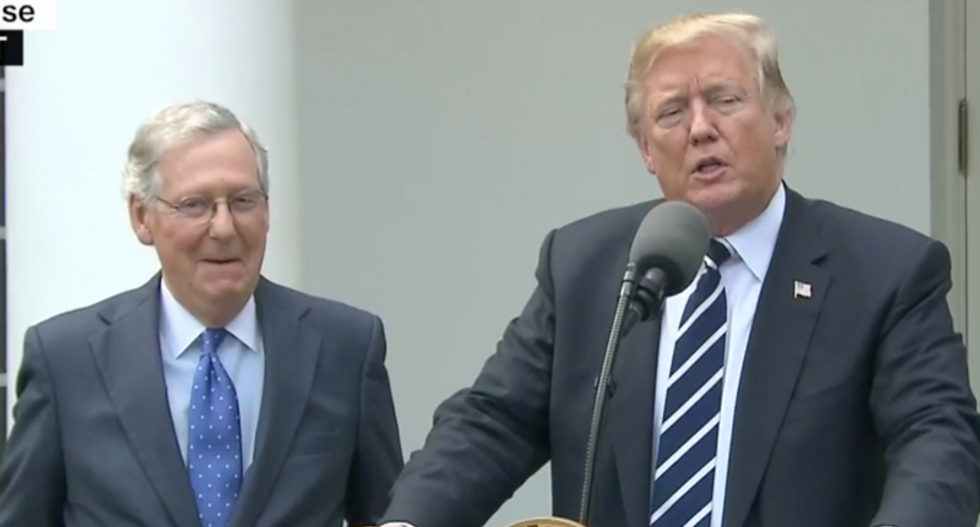 Senate Majority Leader Mitch McConnell’s mastery of hypocrisy was on full display Monday when he was asked about impeachment during a stop in his home state of Owensboro, Kentucky.

“Well, look, I think it’s time to move on. This investigation was about collusion, there’s no collusion, no charges brought against the president on anything else, and I think the American people have had quite enough of it,” McConnell responded.

Actually, Mitch, the probe wasn’t about collusion: it was about conspiracy and obstruction of justice. Also, Mitch, a quick skim of the report reveals plenty of collusion did occur, even though special counsel Robert Mueller concluded it didn’t rise to the level of a provable criminal conspiracy. As for the obstruction of justice piece McConnell so conveniently ignored, that’s something he used to find pretty compelling ... back when Bill Clinton was president.

“I am completely and utterly perplexed by those who argue that perjury and obstruction of justice are not high crimes and misdemeanors,” McConnell said from the Senate floor on February 12, 1999.

Perplexed is right. Republicans, rather than grappling with Trump’s lawless effort to obstruct justice, are hoping the public will simply forget about Volume II of Mueller’s report, the least redacted and most vivid and arresting portion of the document. In fact, McConnell was a happy enabler of Trump’s obstructive efforts. Remember all those times he was asked whether he was worried about Trump potentially firing Mueller, and McConnell assured us there was no reason to suspect Trump would do that? Now we know that McConnell was either gleefully lying or dancing the jig of studied ignorance.

And it’s pretty interesting how eager McConnell is to move along now, as he was pretty adamant about dwelling on similar issues when a Democrat was president.