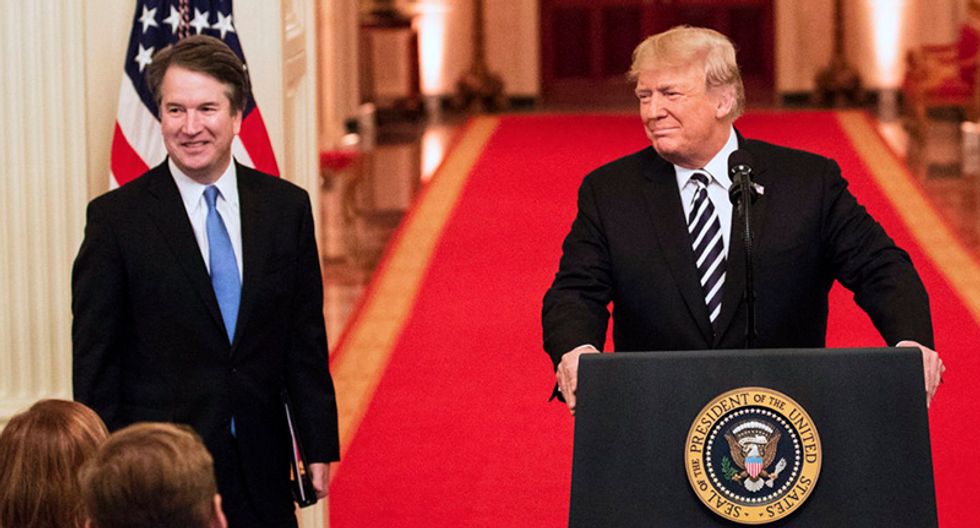 President Donald Trump on Wednesday announced via Twitter that he plans to challenge any attempt at impeachment in the Supreme Court—a legal strategy that has no basis in reality, as experts pointed out.

The president, fresh off a face-to-face meeting with Twitter CEO Jack Dorsey in which Trump complained about his follower count on the website, spent Wednesday morning using the social media service to rant about the possibility of congressional action against his presidency.

"If the partisan Dems ever tried to Impeach, I would first head to the U.S. Supreme Court," tweeted Trump.

The Mueller Report, despite being written by Angry Democrats and Trump Haters, and with unlimited money behind it (… https://t.co/P0Xq2h0Boq
— Donald J. Trump (@Donald J. Trump)1556107806.0

The president then pivoted to attacking his opponent in the 2016 election—which concluded over two-and-a-half years ago—Hillary Clinton.

Trump may want to use the U.S. Supreme Court to push back on attempts to impeach him for high crimes and misdemeanors, likely because of the possible obstruction charges laid out in the Mueller report, but that's not how any of this works.

Congress has the sole power to remove the president from office. The House brings impeachment charges and, if successful in the lower chamber, the Senate acts as a jury. The courts are not a part of the process.

A number of commentators made that point Wednesday morning and bemoaned the president's lack of understanding in the system that he's in charge of.

“The Constitution gives the House of Representatives the sole power to impeach an official, and it makes the Senate… https://t.co/yua1vuNqVz
— Lawrence Hurley (@Lawrence Hurley)1556109575.0

"Impeachment is a question of 'high crimes and misdemeanors'—that is, of violations of the public trust," said Atlantic editor Yoni Applebaum in a lengthy Twitter thread detailing the impeachment process. "And that's a matter for Congress; Donald Trump cannot save himself by appealing to the Supreme Court."

11. But impeachment is a question of “high crimes and misdemeanors”—that is, of violations of the public trust. And… https://t.co/zMjrYlJb3b
— Yoni Appelbaum (@Yoni Appelbaum)1556109591.0

"So much wrong with this president and with the election of a man who is ignorant about the Constitution," said Joyce Vance, a former U.S. attorney and current professor of law at the University of Alabama. "So worrisome he believes the Court will save him, no matter what."

Members of the Democratic leadership in the House of Representatives—the chamber of Congress that would bring the charges against the president—have made clear they will not pursue impeachment at this time.