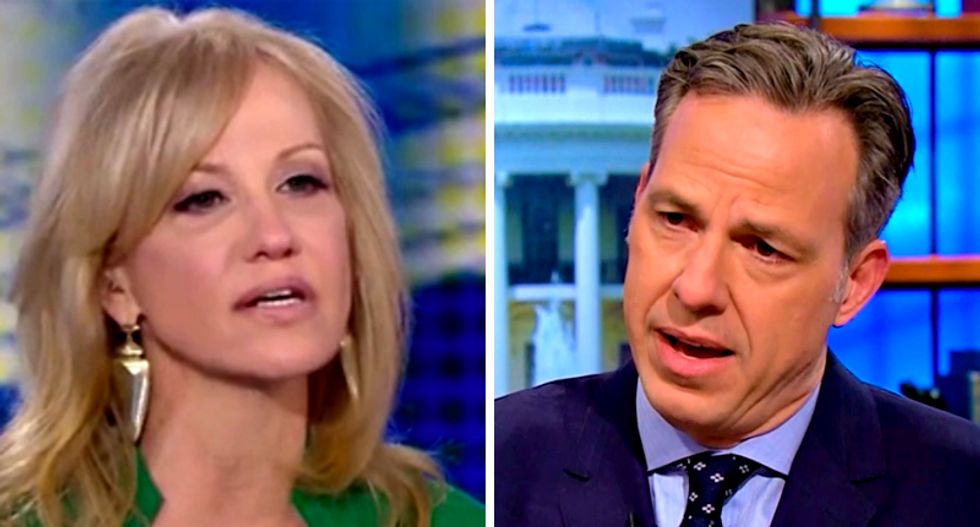 White House counselor Kellyanne Conway on Sunday insisted that President Donald Trump’s handling of a white supremacist demonstration in Charlottesville was “darn near perfect” after the president suggested that there were “fine people” on both sides of the issue.

During an interview on CNN, host Jake Tapper noted that Trump had recently called his response “perfect” after the racist demonstration left one dead in Charlottesville.

Tapper pointed out that Trump has also recently denied that white nationalism is a growing threat around the world.

“Hillary!” Conway replied. “At her convention, she wouldn’t…”

“It’s horrible, whatever it is,” Conway said. “But for Joe Biden, who’s been in public life, he was elected at 29, to come out and have no vision, no accountability for the Obama-Biden record. Didn’t even mention President Obama, but mentions Charlottesville to try to use that for political purposes.”

Tapper cut her off again: “President Trump said he thought his response to Charlottesville was perfect.”

“You want to talk about that,” Conway complained.

“Was President Trump’s response on Charlottesville perfect?” Tapper asked. “Yes or no.”

“I think it was twisted,” Conway groused.

“He said his response was perfect,” Tapper repeated.

“Was his response perfect?” Tapper asked.

“It is darn near perfection,” Conway argued. “When you’re calling out KKK, neo-Nazis and you’re saying, there are people there who hadn’t signed up for that.”

“It looks like you and others are looking at 2020 and decided this guy can’t be beaten fairly,” Conway charged.

“That’s beneath you,” Tapper shot back.

“It’s not beneath me,” Conway assured the host.

At that point, Conway demanded Tapper “move on” to talk about the economy.