I asked these 3 simple questions of Betsy DeVos’ Education Department. It 'created havoc' among the staff. 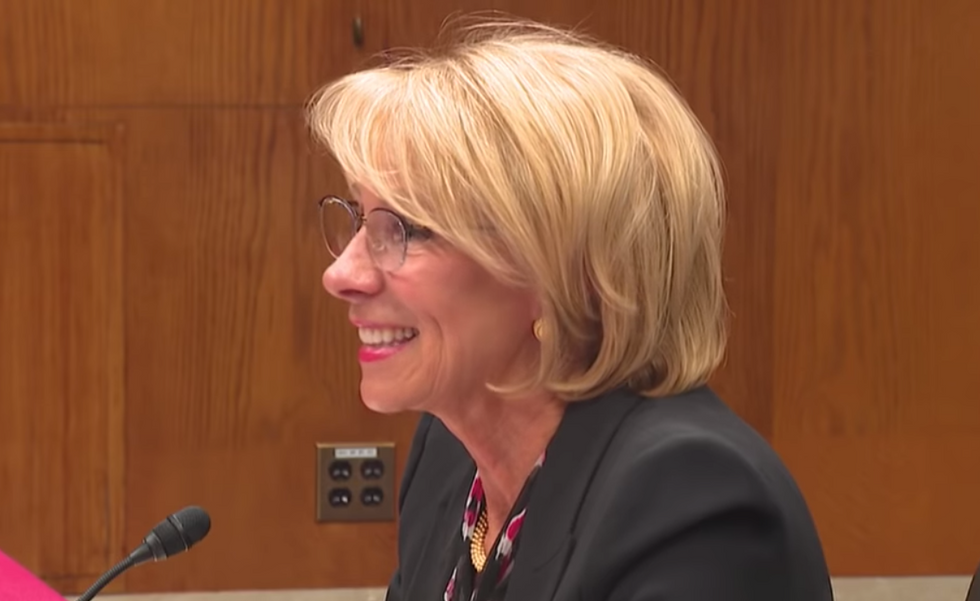 U.S. Secretary of Education Betsy DeVos is famous for giving nonresponses to fairly straightforward questions. More than one commentator has had fun with her contorted evasions, but her inability to explain the rationale for current education policies isn’t confined to her own personality and ideology. It’s actually been endemic in the education policy world for years, particularly in how the federal government continues to hide its agenda to further privatize the nation’s public school system by creating and expanding charter schools.

Arne Duncan, who served as secretary for the longest period of time before DeVos, was famous for being the consummate non-listener, often talking over people with his prepared remarks and ignoring the advice of teachers and education experts.

This is not a partisan issue. Teachers demanded Duncan’s resignation, and Republican members of Congress have complained that DeVos’ department isn’t responsive to requests for information.

Of course, any comparison between DeVos and Duncan can find some very big differences, but a constant throughout both administrations has been to ignore, wall-off, or obfuscate when confronted with any inquiry aimed at the federal government’s efforts to create and expand charter schools.

A History of Hiding

My latest brush with the education policy edifice’s imperviousness to outside inquiry occurred while researching and writing a new report on the education department’s Charter School Program (CSP). I coauthored the report “Asleep at the Wheel: How the Federal Charter Schools Program Recklessly Takes Taxpayers and Students for a Ride” with Network for Public Education Executive Director Carol Burris.

Burris and I found that up to $1 billion awarded by the CSP—in more than 1,000 grants—was wasted on charter schools that never opened or opened for only brief periods before being shut down for mismanagement, poor performance, lack of enrollment, and fraud.

During our investigations, we came across a previous report published by the Center for Media and Democracy (CMD) in 2015, during the Obama presidential administration, that found similarly disturbing results, where federal grants had gone to hundreds of charter schools that had basically taken the money and run.

To compile its report, CMD had submitted 33 Freedom of Information Act requests with the Department of Education and was told these records would be forthcoming. The promised records never came.

The department also refused to provide CMD with public records regarding communications between federal and state officials about charter school grants and oversight. The largest grants by far had gone to state education agencies (SEAs) to disburse in subgrants to charter school startups and expansions. Federal officials claimed releasing such information would “constitute a clearly unwarranted invasion of personal privacy.”

After CMD repeated its requests, the department released a list of some charter schools receiving the SEA grant money in a PDF that was “partly illegible.” Other information CMD requested related to the applications for the state grants never came. CMD concluded in its report summary, “Public information about funds received and spent by charters is severely lacking.”

The information CMD was eventually able to piece together came out in its report in October 2015, receiving widespread coverage by education policy blogs and community organizers.

Two months after the CMD report appeared, the Charter School Program released a dataset showing all grants awarded between school years 2006–07 and 2013–14, with information on grants given to start-up, replicate, and expand charter schools. The dataset was released on December 23—just two days before the holiday break—to minimize attention.

Also in the same year, perhaps in anticipation of the CMD report, the department issued a “Dear Colleague” letter to SEAs emphasizing the importance of financial accountability for charter schools receiving federal dollars. The letter recommended SEAs conduct regular independent audits and strengthen authorizing practices. And the department provided an “Overview of the 2015 CSP SEA Review Process” explaining how the program awarding charter grants to states is administered.

Given the department’s 2015 efforts to disclose information on charter school grants and provide guidance in how the grants should be administered, it seemed only fair, before issuing our report, to ask the agency what had been done since, especially under this new administration.

Consequently, on March 8, I sent emails to contacts provided for three CSP grant programs that were the subject of our report. The three emails repeated basically the same three questions, but the email I sent to the contact overseeing the SEA grants, now called “Grants to State Entities,” follows:

This is to inquire about the current grant application review process used for the Charter Schools Program Grants to State Entities. Specifically, in 2015, the Department published an “Overview of the 2015 CSP SEA Review Process.” My questions:

On March 15, I received a voicemail from an official in the public affairs division of the department asking me to call her back. The message started out nice enough but then veered toward criticism. “Apparently you have sent his request to multiple people,” she said (emphasis original), “and that just creates havoc for everyone.”

When I immediately called her back, I explained I had merely sent my inquiry to the contacts provided on the relevant sections of the department’s website. “That’s understandable,” she replied, but for “future reference” I was told to send inquiries to “a director”—though I’m not sure who that is. And I was told again my questions had “created havoc” in the office but that department staff members were “working on it” and would “take a few days.”

As of this writing, I’ve yet to receive any other replies.

What followed my phone exchange with the department official was, among other things, a very bad, awful day for the secretary when news of our report broke on page A4 of the Washington Post on the very same day she had to appear on Capitol Hill before a House committee hearing.

During the hearing, Representative Rosa DeLauro, a Democrat of Connecticut, referred directly to our report, citing the $1 billion stain on the department’s charter school grant program, and told DeVos, “This budget is full of cruel cuts to education programs, and it baffles me that you found room for a $60 million increase to the Charter School Program... especially when you consider recent reports of waste and abuse in the program.”

When Representative Mark Pocan, a Democrat from Wisconsin, asked DeVos what was being done to recover the $1 billion in alleged financial mismanagement involving charters, DeVos said she “would look into the matter.”

On the issue of how a federal agency could allow charter operators to rip off American taxpayers with impunity, and generally suffer no adverse consequences for their acts, DeVos acknowledged that waste and fraud in the charter grant program had been around for “some time.”

That much is true.

It was under Arne Duncan’s watch that the federal charter grants program was greatly expanded, states were required to lift caps on the numbers of charter schools in order to receive precious federal dollars, and the administration Duncan served in insulted public school teachers by proclaiming National Charter School Week on dates identical to what had always been observed as Teacher Appreciation Week.

And most of the wanton charter fraud we detailed in our report that ran rampant during the Duncan years is now simply continuing under DeVos, with little to no explanation of why this is allowed to occur.

So at least we have that clear.