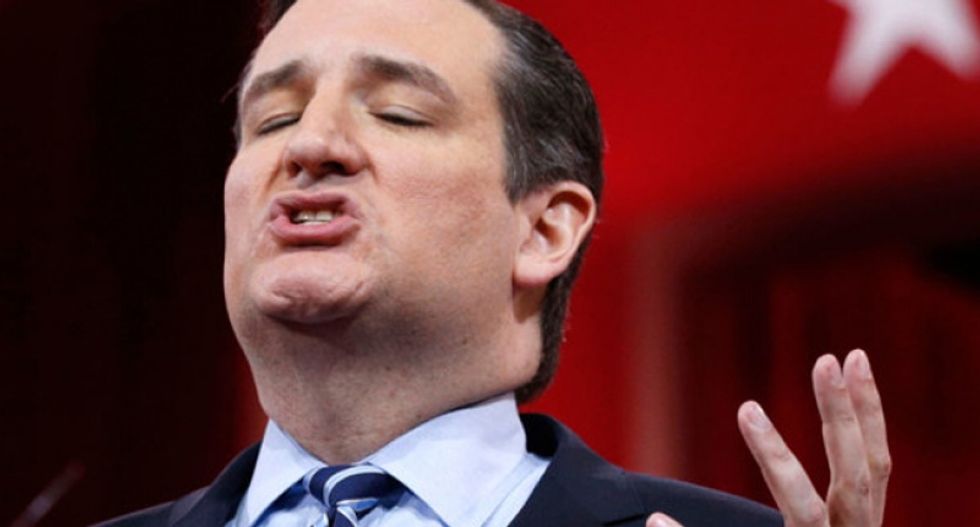 As anyone who watched the debacles of Republicans in Washington DC failing to step up with disaster relief funding in the aftermath of Hurricanes Sandy and Maria knows, the GOP is plenty willing to spend money on Pentagon pork but generally won’t drop a dime even in the worst of circumstances to help fellow Americans when storms decimate big swaths of the country.

Of course, Texas Republicans have been a big part of this trend. Ted Cruz famously voted against aid in the aftermath of Hurricane Sandy, claiming two thirds of the relief bill “had little or nothing to do with” the storm. That got him bitched out by the ultimate GOP bitch and bully, former New Jersey Gov. Chris Christie, and basically called a liar (“Lyin’ Ted!”) in a USA Today fact check.

And of course, Trump, the Liar-In-Chief, is still standing in the way of a disaster relief bill aimed at helping victims of Hurricane Maria in Puerto Rico and victims of recent flooding in the Midwest and wildfires in California. A delicious side detail here is that Texas Republicans are simultaneously begging for federal recovery dollars to address damage still lingering from Hurricane Harvey, which hit about 18 months ago, from the same people they collaborated with and bolstered who have prevented disaster aid from flowing to these other, “blue” or “liberal” parts of the country. It turns out it kind of sucks when your own party “principles” come back and bite you in the ass:

More than a year and a half after Hurricane Harvey slammed into Texas, killingdozens, the state is still waiting on billions in federal recovery dollars. In the meantime, Texas lawmakers are looking to prepare the state — the most disaster-prone in the nation — for future storms.

During their first session since Harvey — a close second to Hurricane Katrina on the list of costliest tropical cyclones in U.S. history — legislators have filed dozens of bills this year aimed at storm recovery, response and preparedness. And they appear poised to withdraw billions from Texas’ historically flush emergency savings account to bankroll a variety of disaster-related items — measures that disaster response and flood control experts say are rare for any state, but especially historically frugal Texas.

Much of the money would go to school districts that saw sharp declines in property values and student enrollment after Harvey and to state agencies that diverted resources to respond to the storm. But most of it would go to help communities finance overdue flood control projects — and to help them secure billions more federal recovery and flood mitigation dollars.

Specifically, the legislation calls for the money to be funneled into a special account from which grants and low-interest loans would be doled out to communities for projects that may not be eligible for federal funding. It also would be used to help storm-battered communities pay for the so-called “local match” they must send to the federal government before it will release billions more dollars to repair storm-battered government facilities, and to harden public and private structures so they can better withstand future storms.

The Texas Senate wants to put $1.8 billion toward those efforts, and the Texas House wants to invest more than $4 billion…

“I commend the House and Senate, which have both proposed using rainy day funds to help rebuild Texas stronger and more resilient than before disaster struck,” Abbott said in a speech in February, a few weeks into the legislative session.

The Republican noted that the federal government has appropriated more than $30 billion in aid but said, “We all know more resources are needed to help Texans rebuild.”

Setting aside the delicious irony of watching Texas Republicans suddenly recognizing that there is, indeed, a role for the federal government in disaster relief and that damn, people who have been hit by hurricanes actually do need federal dollars to rebuild and not everything is about the 10th amendment and federalism and a federal government so small you can drown it in a bathtub, it is actually good to see Texas Republicans getting the point. It’s also helpful that the state is strongly considering “the creation of a statewide flood plan.”

Of course, I’ve written before about the monumentally stupid proposal to build a toxic waste dump in the middle of a floodplain in Laredo, and Texas could easily shut dumb ideas like that one down without needing to spend a single penny— which seems like the kind of thing that would make hypocritical Republicans happy and allow them to “do something” without displaying a mismatch between their “principles” and hard-and-fast needs quite so obviously. But that would probably entail Gov. Abbott stepping up and giving a crap when the guy who owns the land has lots of GOP connections and makes lots of GOP donations.

In other words, don’t count on it. But Texas *might* get smart and spend some of its rainy day fund on, well, what happens on and in the aftermath of really, really rainy days. And Texas Republicans *might* have an extra incentive to quit standing in the way of federal dollars headed to less red places the next time a natural disaster hits one of those.