How Mitch McConnell is killing the Senate 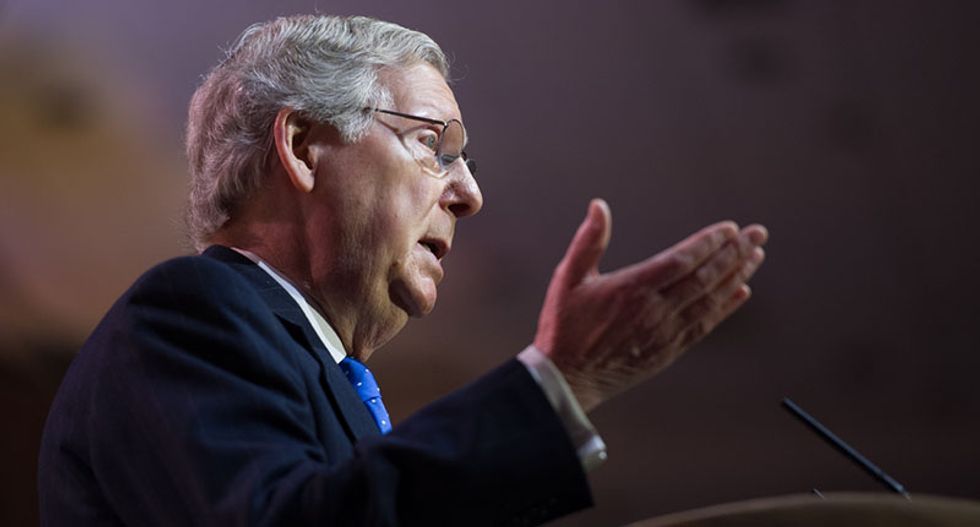 Congress has recessed for two weeks without passing a desperately-needed disaster relief bill. Why not? Because Senate Majority Leader Mitch McConnell didn’t want to anger Donald Trump by adding money for Puerto Rico that Democrats have sought but Trump doesn’t want.

America used to have a Senate. But under McConnell, what was once known as the worlds greatest deliberative body has become a partisan lap dog.

Recently McConnell used his Republican majority to cut the time for debating Trump’s court appointees from 30 hours to two – thereby enabling Republicans to ram through even more Trump judges.

In truth, McConnell doesn’t give a fig about the Senate, or about democracy. He cares only about partisan wins.

On the eve of the 2010 midterm elections he famously declared that his top priority was for Barack Obama “to be a one-term president.”

Between 2009 and 2013, McConnell’s Senate Republicans blocked 79 Obama nominees. In the entire history of the United States until that point, only 68 presidential nominees had been blocked.

This unprecedented use of the filibuster finally led Senate Democrats in 2013 to change the rules on some presidential nominees (but not the Supreme Court) to require simple majorities.

In response, McConnell fumed that “breaking the rules to change the rules is un-American.“ If so, McConnell is about as un-American as they come. Once back in control of the Senate he buried Obama’s nomination of Merrick Garland for the Supreme Court by refusing even to hold hearings.

Then, in 2017, McConnell and his Republicans changed the rules again, ending the use of the filibuster even for Supreme Court nominees and clearing the way for Senate confirmation of Trump’s Neil Gorsuch and Brett Kavanaugh.

Step by step, McConnell has sacrificed the Senate as an institution to partisan political victories.

There is a vast difference between winning at politics by playing according to the norms of our democracy, and winning by subverting those norms.

To Abraham Lincoln, democracy was a covenant linking past and future. Political institutions, in his view, were “the legacy bequeathed to us.”

On the eve of the Senate’s final vote on repealing the Affordable Care Act in July 2017, the late John McCain returned to Washington from his home in Arizona, where he was being treated for brain cancer, to cast the deciding vote against repeal.

Knowing he would be criticized by other Republicans, McCain noted that over his career he had known senators who seriously disagreed with each other but nonetheless understood “they had an obligation to work collaboratively to ensure the Senate discharged its constitutional responsibilities effectively.”

In words that have even greater relevance today, McCain added that “it is our responsibility to preserve that, even when it requires us to do something less satisfying than ‘winning’.”

In politics, success should never be measured solely by partisan victories. It must also be judged by the institutional legacy passed onward. The purpose of political leadership is not merely to win. It is to serve.

In any social or political system it’s always possible to extract benefits by being among the first to break widely accepted norms. In a small town where people don’t lock their doors or windows, the first thief can effortlessly get into anyone’s house. But once broken, the system is never the same. Everyone has to buy locks. Trust deteriorates.

Those, like Mitch McConnell, who break institutional norms for selfish or partisan gains are bequeathing future generations a weakened democracy.

The difference between winning at politics by playing according to the norms and rules of our democracy, and winning by subverting them, could not be greater. Political victories that undermine the integrity of our system are net losses for society.

Great athletes play by the rules because the rules make the game. Unprincipled athletes cheat or change the rules in order to win. Their victories ultimately destroy the game.

In terms of shaping the federal courts, McConnell has played “the long game”, which, incidentally, is the title of his 2016 memoir. Decades from now, McConnell will still be shaping the nation through judges he rammed through the Senate.

But McConnell’s long game is destroying the Senate.

He is longest-serving leader of Senate Republicans in history but Mitch McConnell is no leader. He is the epitome of unprincipled power. History will not treat him kindly.