How Amazon — and 56 other corporations — took your tax dollars 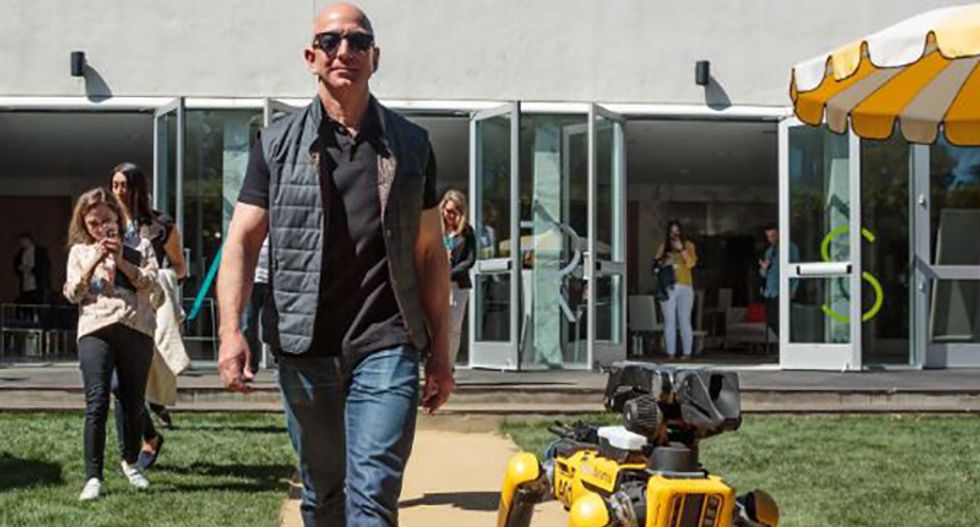 That’s right. Sixty profitable corporations paid no federal taxes in 2018, twice the number that typically paid nothing in the years before the 2017 tax breaks took effect. In fact, it’s worse than that. Fifty-seven of these corporations demanded rebates from the government—which means taxpayers like you and me paid them to exist. These are corporations on the dole. They claim to hate socialism if it means Medicare for All, but they sure as hell love socialism when it’s welfare for them.

Sanders, Harris, Warren and other candidates seeking the Democratic nomination paid their taxes because they are patriots. Most working Americans pay a fair share to support their country. True citizens pay so that their nation can thrive. They pay so that the United States can afford to educate its citizens, pave its roads, operate its courts, care for its vulnerable and sustain its military. They pay because they understand they have a duty to the country that nurtured them, that protects them and that they love.

But too many U.S. corporations, which the U.S. Supreme Court has anointed with human rights, refuse to acknowledge their concomitant obligations. Corporations and the super wealthy pushed hard for the tax breaks Republicans bestowed on them in 2017. Fat cats paid untold tens of millions to dark money groups that served as cash cows for GOP candidates who, once elected, shepherded those tax breaks.

Corporate front groups and GOP apologists such as Treasury Secretary Steven Mnuchin insisted the tax cuts would pay for themselves. Mnuchin went even further, contending the cuts would reduce the deficit by $1 trillion. Everything would be hunky-dory.

It was a lie then. And now the deceit is exposed for the grotesquerie it was. The U.S. Treasury reported that corporations paid $92 billion less in federal taxes in 2018 than they did in 2017, a 31 percent drop-off.

To put that in perspective, the decline is the second largest since 1934, which was during the Great Depression. The only larger swoon was 55 percent at the outset of the Great Recession from 2008 to 2009.

Another ill effect is that government debt balloons. The U.S. Treasury Department reported that the deficit rose $113 billion or 17 percent in the first year of the tax cuts, the largest one-year increase since 2009, which was during the worst of the Great Recession. That black hole is projected to occur every year the tax cuts remain in effect.

Republicans take those deficit figures—deficits they created by cutting taxes—and use them to demand offsetting spending cuts—that is, cuts to Social Security, cuts to Medicare and Medicaid, cuts to food stamps and school lunch programs, cuts to programs that are precious to workers and the poor.

The deficits grow like this: Amazon, the online marketplace, made nearly $11 billion last year, and instead of paying the current, low 21 percent corporate tax rate on that income, it demanded that taxpayers give it $129 million. Which they did. It wasn’t a rebate since Amazon paid no taxes. It was a big fat, gift withdrawn involuntarily from workers’ pockets, wrapped in a fuzzy, flocked Amazon smiley bag, and deposited directly into corporate coffers. This is perverse wealth transfer, from the poor and middle class to the rich and corporations.

And taxpayers didn’t even get Amazon Prime in exchange.

Of the 60 profitable corporations that paid no taxes, 57 got payments like this from workers. Amazon’s wasn’t even the largest. Ten companies took more, including Duke Energy, which set an infamous record for itself by grubbing the most—$647 million. On about $76 billion in pretax income, the 57 forced taxpayers to give them $4.3 billion.

If, instead of exploiting every potential loophole and dodging every conceivable requirement, these corporations had paid their taxes at the new, low 21 percent rate, the United States would have received $16.4 billion in revenue from them.

Americans overwhelmingly support repairing the nation’s crumbling roads, bridges, airports and water lines, using U.S.-made products and union workers. In 2017, the American Society of Civil Engineers gave the nation’s infrastructure a D grade and estimated that the United States must spend $4.5 trillion by 2025 to upgrade the structures on which American commerce depends.

President Donald Trump and majorities in Congress are all for infrastructure improvements too. But it never happens. And the reason is money. There is no money to do it when so many U.S. corporations use this infrastructure to make boatloads of money, pay no taxes and demand the government give them workers’ tax dollars.

Workers use those roads and bridges and pipelines too. But we pay. Yeah, Bernie Sanders and Elizabeth Warren made a lot of money by writing and selling books in the past couple of years. In 2018, Sanders and his wife, Jane, reported to the IRS an adjusted gross income of $561,293, which included $393,000 from selling books. They gave $19,000 to charities and paid a federal tax rate of 26 percent—significantly higher than the 21 percent rate charged to corporations, which don’t pay it anyway. Bernie and Jane gave the federal government $145,840.

Other Democrats seeking the party’s nomination for president released tax returns showing they paid their fair share as well. They include Kamala Harris, who reported earnings of about $1.9 million and paid at an effective tax rate of 37 percent last year. Sen. Warren, with an adjusted gross income of $846,394, paid at a rate of 27 percent. Washington Gov. Jay Inslee, who had the lowest adjusted gross income of the Democrats who have released tax forms, $202,912, also, logically, paid the lowest rate, 15 percent.

In the end, each of them paid more money and at a higher rate than billionaire Amazon.

Not all wealthy people believe it’s wise to sustain a system that does not require the 1 percent and profitable corporations to pay their fair share. A group of them, the Patriotic Millionaires, as they call themselves, met in Washington, D.C., this week to discuss better ways to assess taxes and what will happen to this country if nothing changes.

They believe the government should mandate tax payments from the rich and corporations to ensure the survival of the very institutions and values that helped the 1 percent accrue millions and billions.

The crucial difference between you and Amazon is that you paid your fair share, and Amazon took your tax dollars. So, no, the roads and bridges won’t get fixed this year either.