'Her life Is in danger': Why aren't congressional leaders standing up for Ilhan Omar? 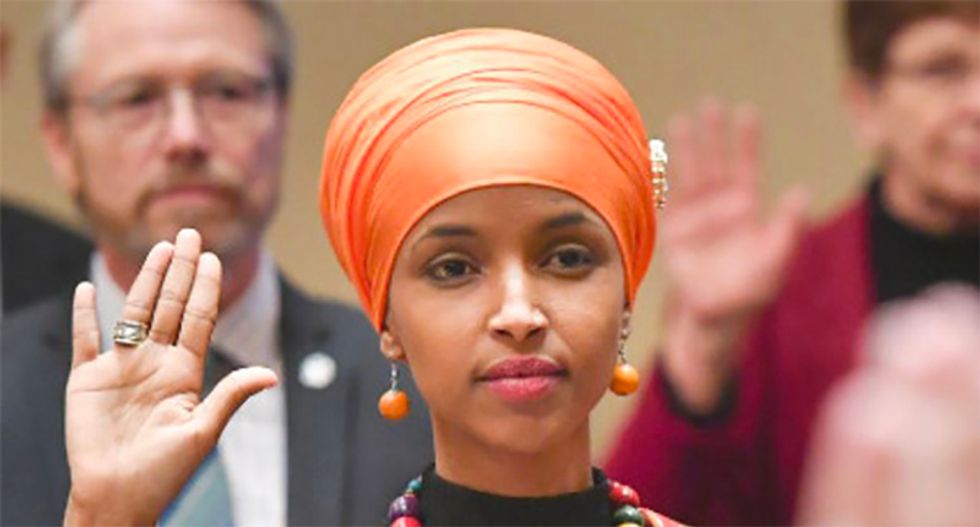 Members of Congress are being urged to speak out against President Donald Trump's latest attack on Rep. Ilhan Omar—one some are characterizing as an incitement of violence against her.

The President is actively and willfully endangering the life of a member of Congress.
— Chris Hayes (@Chris Hayes)1555106612.0

The call is in response to an edited video the president posted on Twitter Friday afternoon. As of this writing, the president has that tweet pinned.

In the video, a short phrase the Minnesota Democrat uttered at a speech last month—"some people did something"—is repeated three times, interspersed with footage of the aftermath of 9/11 in an effort to portray her as minimizing the attacks.

The manipulation of the comments she made to the Los Angeles chapter of the Council on American-Islamic Relations (CAIR) comes after they were already pounced uponthis week by some Republican lawmakers and right-wing media, who used them incite hatred. It also caps off a week in which Trump encouraged the idea that Omar is somehow "assaulting Jews" and in which Omar faced a death threat from a Trump supporter.

"Trump's attacks on Representative Ilhan Omar are horrendous and continue to put her life in danger after she has already faced numerous death threats in recent months," said Waleed Shahid—communications director for progressive advocacy group Justice Democrats— in a statement Saturday. Democratic Party leaders, he added, should do more "to fight back on behalf of the new generation of leaders under constant attack by the right-wing war machine."

Pressley was among the progressive lawmakers denouncing the president's video compilation. "The occupant of the @WhiteHouse is putting her, her family, her team & Muslim Americans across the country in jeopardy," she said.

My sister in service @IlhanMN is on my heart tonight. The occupant of the @WhiteHouse is putting her, her family, h… https://t.co/LlhjI1DFib
— Ayanna Pressley (@Ayanna Pressley)1555128268.0

Tlaib also called on "more Democrats to speak up."

While Speaker Nancy Pelosi steered clear of mentioning Omar by name in her reaction to Trump's tweet, Sens. Elizabeth Warren (D-Mass. ) and Bernie Sanders (I-Vt.)—both contenders for the 2020 Democratic ticket—were clear in joining the chorus of condemnation:

The President is inciting violence against a sitting Congresswoman—and an entire group of Americans based on their… https://t.co/LQXb3v96tp
— Elizabeth Warren (@Elizabeth Warren)1555115002.0

Ilhan Omar is a leader with strength and courage. She won't back down to Trump's racism and hate, and neither will… https://t.co/9gPSvSQaXE
— Bernie Sanders (@Bernie Sanders)1555114071.0

"The Democratic Party leadership," said Shahid, "must tell the voters of America that Trump seeks to divide and conquer America through racism, religious bigotry, and other forms of hate for a purpose so that working people can't come together across our differences to take on billionaires like Trump himself and fight for healthcare for all Americans."

Evan Weber of the youth-led Sunrise Movement had a similar take:

Other observers saw Trump's tweet as an opportunity to remind the public of how the president viewed the 9/11 attacks at the time:

Never Forget. While the President is making life much harder for Rep Omar, who has already been subject to death t… https://t.co/OqqCZ9IUra
— John Legend (@John Legend)1555110589.0