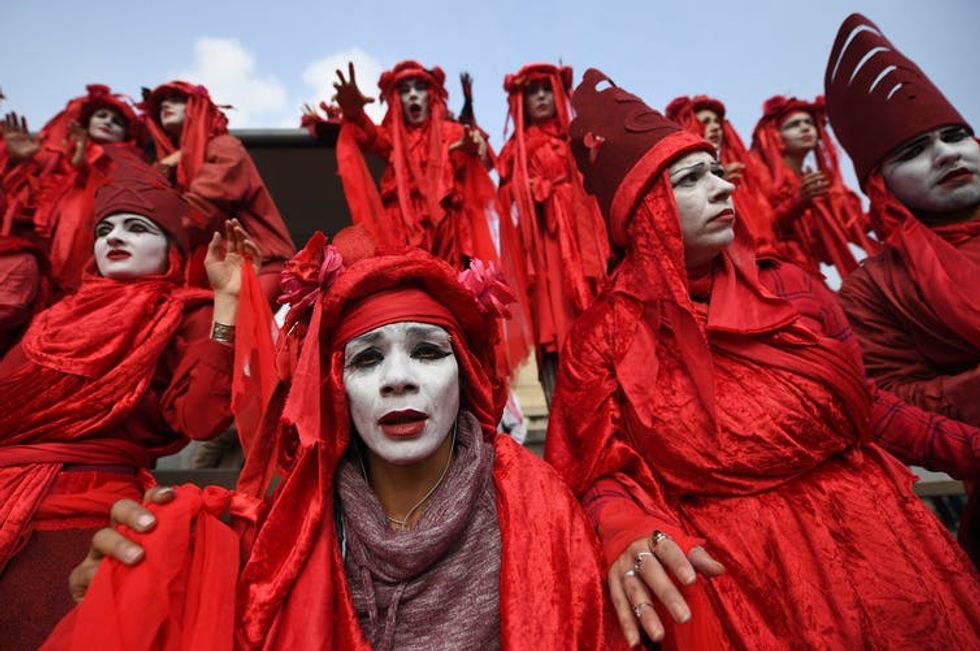 Extinction Rebellion burst onto everybody’s screens with disruptions and mass arrests across the UK and around the world, in protest against government inaction on climate change. Radical disruptions have been at the heart of Extinction Rebellion’s activism since it was founded in 2018 – from January’s disruption of London Fashion Week, to the infamous naked protest in Parliament – but the scale of the most recent actions has finally succeeded in forcing mainstream news cycles to start giving the politics of climate change the attention it deserves.

One could argue that Extinction Rebellion’s week of action was fortunately timed – the extension of Article 50 to October has created something of a news vacuum while everyone takes a momentary breather from Brexit. Nevertheless, activists would rightly claim that climate change is the bigger looming catastrophe. In October 2018, the UN’s climate agency published grave projections of the enormity of the challenge ahead if we are to limit the most catastrophic consequences of climate change. For both Extinction Rebellion and the Fridays for Future school strike movement, the piecemeal response of nations at the UN’s annual climate change conference two months later made it clear that there is no more time to lose.

The aim, then, is to force the issue. Through their blockades of iconic central London sites, Extinction Rebellion is keeping climate change at the forefront of the public and politicians’ lips, making the seemingly abstract problem facing all of us feel real. And rather than just warning of this climate emergency, it offers a vision of an alternative future, where a Citizens Assembly takes the lead in reducing UK emissions to net zero.

Perhaps inevitably, Extinction Rebellion’s actions have been met with a familiar backlash from some political commentators – witness Adam Boulton’s sneering performance on Sky News, and David Blunkett’s indignant authoritarianism in the Daily Mail. But while activists say they regret the disruption caused to working people, they consider their actions a necessary evil in order to change the conversation.

Older activists will surely point to the impact and legacy of 1999’s Battle of Seattle, when the Global Justice Movement successfully closed down the World Trade Organisation’s annual meeting. Not only was this extremely empowering for those involved, it crucially helped make resistance to a largely abstract neoliberal governance structure seem concrete and real.

Much like the Occupy demonstrations seven years ago, Extinction Rebellion’s latest eye-catching protests have been friendly and open, laden with artistic performances, talks, and human connection. This good-natured spirit has so far meant that the movement has gained significant traction not only on the airwaves, but on the streets too.

Extinction Rebellion’s efforts are aimed at building momentum, and they are based in political science – their website highlights a figure that it takes just 3.5% of a nation’s population engaged in sustained nonviolent resistance to topple a dictatorship. In the UK, that’s less than 2.5m people.

Their clear demands and principles give the movement a clarity and focus that the Occupy movement may have lacked, and they are growing week by week – Extinction Rebellion says that 50,000 people have joined the movement since the protests started.

However, contemporary mainstream news cycles are fast and fickle, and the movement will have to act quickly and carefully to maximise use of their new-found public platform.

It’s extremely important that the movement’s purpose does not become overshadowed by its tactics. Extinction Rebellion have ransacked the playbook of direct action repertoires – blocking roads, using fake blood, recreating funeral marches, and surprise nakedness. While these have so far been successful in bringing the movement’s name and cause to the fore, using such tactics ad nauseum can quickly lose the public’s imagination and support. This was evident in the Global Justice Movement of the 2000s, as the desire to recreate the euphoria of Seattle resulted in tactical “summit hopping” with diminishing returns.

State agencies also learn quickly how to police repeated mobilisations more ruthlessly and extremely – although Extinction Rebellion’s “trademark” repertoire, the tactical use of mass arrests, so far appears to be combating this threat effectively. Police have powers to disperse protesters, but the sheer number of people now willing to be arrested shifts the balance of power between the public and the state. For example, police have so far been unable to clear any of the four sites in central London, as spates of arrests were closely followed by new wave of protesters arriving to entrench control. The city’s police stations do not have the capacity to hold hundreds of arrested protesters for long periods of time, and court costs will discourage officers from pursuing charges, limiting the punitive power of the state.

At the same time, Extinction Rebellion’s tactics risk fetishising the act of being arrested as a symbol of participants’ commitment to the cause. The movement’s co-founder, Roger Hallam, recently told the BBC that in order to achieve its goal of “getting in the room with government”, it may need to create a law and order crisis on the scale of 1,000 arrests. Such an arbitrary target is problematic, as it may encourage activists to take more risk in pursuit of a goal that is by no means guaranteed.

Even if one is critical of the politics seemingly behind many “aggravated trespass: charges, a criminal record can be extremely costly and discriminating for many younger activists, especially people of colour. This contrasts with the relative risks posed to seasoned activists whose job, lifestyle, or privilege allows them to ride the consequences. It is crucial that Extinction Rebellion fulfils a duty of care to support those who are prepared to put their bodies on the line, but with more than 700 arrested already, its an expensive, high-risk game should multiple criminal charges be brought.

But for now, Extinction Rebellion activists will consider recent events as a runaway success. They have gained visibility, traction, and have at least temporarily steered media attention away from Brexit. Most importantly, they have put climate change squarely in the middle of public conversation. Let’s hope it stays there.

Click here to subscribe to our climate action newsletter. Climate change is inevitable. Our response to it isn’t.