Easter bunnies are more deliciously wicked than you might think 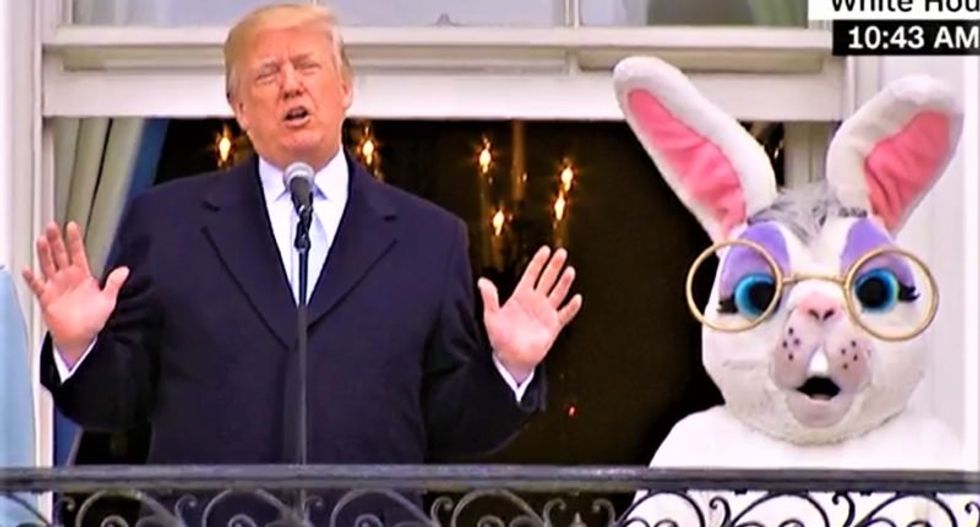 For most of Christian history, those furry little creatures were associated with queer sex, not chocolate.

Easter may be a Christian holiday, but many of its most delightful traditions have pagan or pre-Christian roots. Spring equinox has long been celebrated with symbols representing fertility and regeneration of life, and Christendom has embraced many of these despite their naughty history. Consider the Easter rabbit.

You may have heard that rabbits got associated with Easter as the companion animal of the Teutonic fertility goddess Eostre (also Ostare, Ostara, Ostern, Eostra, Eostur, Eastra, Eastur, Austron and Ausos), who gave the holiday its German and English names. In some versions of the tale, Eostre turns a colorful bird into a celestial rabbit or hare but allows the creature to return to earth each spring to hide brightly-colored eggs. The earliest existing mention of Eostre is found in the writings of the Venerable Bede, in the 8th Century, and no earlier archeological evidence exists or associates such a goddess with a rabbit or hare. (Hares are members of the same lagomorpha family as rabbits, but larger with longer ears and above ground nests.) So, Eostre may be a medieval invention, with details including her familiar animal fleshed out later.

Adolf Holtzman, in his 1874 book, Deutch Mythologie, linked the Easter rabbit with Eostre, but only by way of speculation: “The Easter Hare is inexplicable to me, but probably the hare was the sacred animal of Ostara; just as there is a hare on the statue of [the Celtic goddess] Abnoba.” His speculation appears to be based on comments made a half century earlier by folklorist Jacob Grimm.

The linkage of rabbits to Eostre may be tenuous, but other connections are more clear. When it comes to traditional symbolism, hares and rabbits are deliciously wicked—and no, I’m not talking about binging on chocolate rabbits even though candy makers produce some 90 million of the tasty critters every year.

Rabbits are prolific breeders, with a single female capable of producing as many as a dozen offspring monthly; something that didn’t go unnoticed by our ancient ancestors. The saying humping like bunnies is a modern take on the longstanding pairing of rabbits with fertility, prolific sexuality, sensuality, or sexual desire. Ancient writers including Aristotle, Herodotus and Pliny noted the rabbit as a particularly fertile animal.

Greek art connected the hare with Aphrodite, goddess of love, and with Eros—who was depicted on pottery with a lyre and a hare. Some vases depict a man gifting a hare to a younger man as a symbol of their mutual affection. The same relationship of hares with sexual intimacy appears in literature. In the second century comedy Eunuchus, by Terence, one male character says to another, “What are you saying, impudent creature? You are surely a hare and you seek ﬂesh” (3.1.35–36). Thus, the hare is associated with sexuality broadly and with homosexual intimacy in particular.

Adding to this heritage from classical antiquity, other threads of history also may have contributed to the Western pairing of rabbits and hares with sexuality. The Latin name for the European rabbit or cony is cuniculus and the Latin name for vulva is cunnus, creating a natural association even though the words are not entomologically related. In Jewish law, rabbits and hares are forbidden food, unclean, which may have made it natural for scripture-obsessed Christian theologians to associate them with their own taboos, which centered more on sexuality than food.

As Roman Christianity spread across Europe, artists used white rabbits as symbols of fertility or virginal purity. A white rabbit painted at the feet of Mary, for example, is thought to represent her triumph over lust.

Conversely, hares got associated by the Catholic church with sex acts that were contra naturam meaning non-procreative. Clement of Alexandria (150-215CE), the first Church Father to proclaim that all sex must be procreative, pointedly condemned the ambiguous sexuality of the hare, which was said to grow a new anus each year. Clement interpreted the Jewish prohibition against eating meat from hares as a prohibition against pederasty.

Medieval Christians associated hares with witches; a hare might be either a shape-shifting witch or her familiar animal. Witches themselves represented unbridled female sexuality, wild, promiscuous and dangerous because it was uncontrolled by men or the Church. Sexual energy was seen as spiritual power, and the flip side of the witch’s erotic (evil) spirituality can be seen in the writings of Santa Teresa de Avila, which channel sexual energy into mystic euphoria. It’s a short hop, then, from associating rabbits with sex and fertility to associating them with the revelry of spring equinox and Christian celebration of resurrection. The positive and negative associations—those that the Church condemned and those that the church embraced—are intimately entwined.

The earliest existing mention of rabbits specifically associated with Easter can be found in a German source from the 16th or 17th century, within a context of folk religion. The tradition of an egg-hiding Osterhase (Easter rabbit) got carried to Pennsylvania by 18th century German immigrants and then spread across the country. By the end of the 19th Century, the Easter rabbit’s colorful eggs were explained by the magical story of Eostre and the bird turned rabbit.

The eggs themselves are, of course, another symbol of fertility. Depending on your preferences, egg decorating may have reached its pinnacle in Russia, in the jewel-encrusted Faberge eggs given as gifts among royalty, or in the painstaking Bohemian folk art known as kraslice.

Superstitions and folk traditions flow, evolve, and mingle as religions borrow elements from those around them or those which came before. Whether the process is called syncretism or appropriation or simply cultural evolution, borrowing and remixing is the way in which social institutions naturally take shape. Today the celebration of Easter includes elements from across Europe and the Ancient Near East, shaping even the resurrection narrative itself—and American additions have flowed back across the waters. As stories and traditions get passed from person to person, symbolism changes and new meanings and stories arise.

Today, Easter remains a sacred holiday for many Christians, while for others—especially children—it is simply an excuse for revelry, surprises and sweets. But through it all, the holiday remains anchored to pleasure, love, fertility, and—after the dark of winter and mud of early spring—the emergence of new life symbolized by chicks, eggs, tulips, green grass and, of course, rabbits.