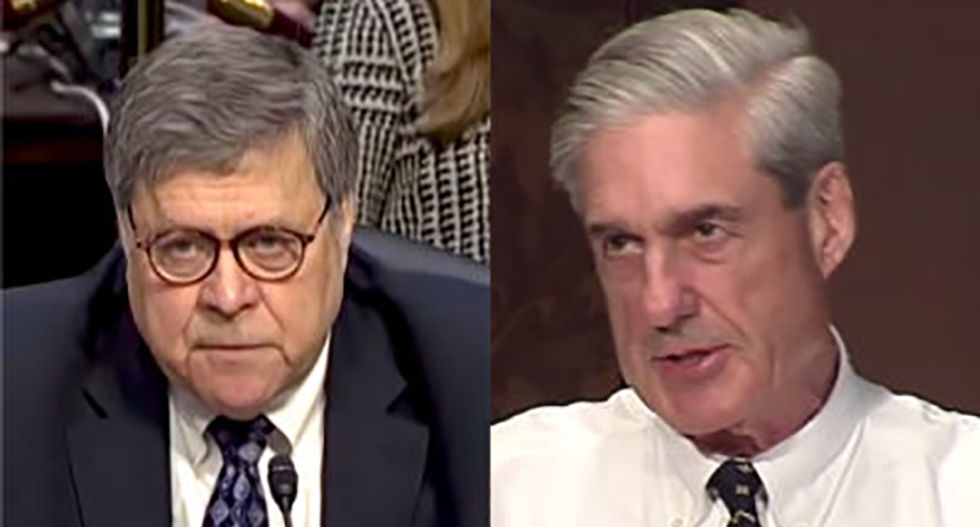 I trust Attorney General William Barr to handle the final report of special counsel Robert Mueller almost as much as I trusted James Clapper to handle national intelligence during the Obama years. Which is to say, I do not, and neither should you. This is the same man, after all, who supported pardons during his previous tenure as attorney general under President George H.W. Bush for those involved in the Iran-Contra affair, dismissing the scandal at the time as a “witch hunt.” (Sound familiar?)

It’s been over two weeks since Mueller submitted his written assessment of alleged Russian interference in the 2016 election to Barr, and we still haven’t caught a glimpse of the actual document. And unless the courts intervene, we are unlikely to see anything approaching the full report anytime soon.

All that we have seen of the Mueller report to date are fragments of six sentences, totaling fewer than 100 words contained in Barr’s March 24 letter to Congress. The letter purports to be an objective summary of Mueller’s principal findings. In all likelihood, it is an artfully written dodge that, in effect and by design, clears President Trump of all wrongdoing.

Although Barr has promised to release a redacted version of the Mueller report later this month, there’s no substitute for the real McCoy, which Barr says totals nearly 400 pages, not including tables and appendices.

While it’s too early to conclude, in the strict legal sense, that Barr is covering up Mueller’s findings, it’s also irresponsible to dismiss such a possibility.

In the most charitable interpretation, the memo is a stunning exercise in political ingratiation, amounting to an audition for the position of attorney general, or so it seems in retrospect. The memo aligned Barr perfectly with the perspectives long advanced by Trump and his lead television attorney, Rudy Giuliani, who have loudly denounced the Mueller probe as a “witch hunt.”

Barr, who reportedly turned down an offer to join Trump’s legal team in December 2017, apparently felt a sudden need to come to Trump’s rescue. “I am writing as a former official deeply concerned with the institutions of the Presidency and the Department of Justice,” Barr began the memo. Conceding that he was “in the dark about” Mueller’s actual legal theory, he nonetheless expressed “hope” that his “views” might “be useful.”

Taken as a whole, the memo offers a classic straw-man takedown of Mueller and his inquiry. Focusing largely on the firing of former FBI Director James Comey, Barr termed Mueller’s still undisclosed theory of obstruction “novel,” “legally unsupportable” and “fatally misconceived.” He also asserted that a president cannot be guilty of obstruction when he exercises powers delegated to him under the Constitution.

And that’s not all. “Even if,” Barr continued, “one were to indulge Mueller’s obstruction theory” and assume that Trump fired Comey with the corrupt intent to impede the Russia probe and protect himself, Trump still couldn’t be charged with obstruction unless he also committed the underlying offense of “illegal collusion” with the Russians.

Apart from the fact that there is no crime of “collusion” outside of the anti-trust area—Mueller was hired to investigate the Trump campaign for possible conspiracy and unlawful electoral coordination with Russia—Barr’s memo was just plain wrong on obstruction. Although the Supreme Court has not yet addressed the subject, the lower federal courts have consistently held that one can commit the act even if innocent of any underlying crime. Just as Martha Stewart, for example, was found guilty of obstruction but not of the underlying offense of securities fraud originally lodged against her, so too could Trump obstruct justice even if he never conspired with Russia.

No matter. Having misrepresented the law of obstruction, Barr advised that until Mueller had “enough evidence to establish collusion,” the special counsel “should not be permitted to interrogate the President about obstruction.”

Topping off his advice, Barr proffered an astonishingly expansive view of executive power that was sure to appeal to his new boss:

Consistent with Barr’s advice, Trump never agreed to a face-to-face sit-down with Mueller. In December, Trump nominated Barr to serve as attorney general. In February, the Senate confirmed his appointment by a vote of 54-45.

Barr continued his defense of the president in his March 24 letter. Composed a scant two days after receiving Mueller’s voluminous submission, the memo reads more like a press release than a document prepared by the highest-ranking officer of the Justice Department.

After commending Mueller for his thoroughness, citing the 2,800 subpoenas issued and the 500 search warrants executed during the probe, Barr delivered the payoff Trump craved, announcing that Mueller was not going to recommend any additional indictments beyond those he had already filed. Equally important, Barr stressed that no additional indictments of anyone, especially the president, were legally warranted.

According to Barr, the Mueller report is divided into two parts—the first dealing with Russian interference, and the second with obstruction. The letter devoted three paragraphs to each topic.

On the interference issue, Barr accepted Mueller’s finding that Russian government actors conducted both social-media disinformation attacks aimed at influencing the election, and that Russians also hacked the emails of people affiliated with the Clinton campaign and Democratic Party organizations.

Abandoning the misnomer “collusion,” which is nowhere to be found in the letter, Barr quoted only a fragment of a finding from the Mueller report: “[T]he investigation did not establish that members of the Trump Campaign conspired or coordinated with the Russian government in its election interference activities.” Barr repeated the finding no less than five times.

On obstruction, Barr wrote that Mueller had “declined to make a traditional prosecutorial judgment.” Instead, Barr explained, Mueller laid out “evidence on both sides of the question,” and concluded that the record neither showed the president had committed a crime, nor that he should be exonerated.

Rather than leave the obstruction issue unresolved, however, Barr decided to review the record on his own—something the Justice Department’s regulations by no means require him to do. He just as easily could have reserved his own judgment and passed the issue along to Congress. But, together with Deputy Attorney General Rod Rosenstein, Barr determined, just as he had in June, that without proof of conspiracy, an obstruction case could not be supported.

Barr’s letter set the stage for Trump and his minions to boast that the president had been totally vindicated. Within hours of the letter’s publication, cable news networks and segments of the print media joined in, breathlessly proclaiming that Mueller had found no evidence of collusion and that the attorney general had exonerated Trump of obstruction.

Fortunately, a counternarrative has taken shape that resists this initial spin. Members of Mueller’s team, upon returning to their old Justice Department jobs, reportedly have complained to colleagues that the investigation actually had produced “very compelling” evidence of conspiracy and “alarming and significant” proof of obstruction, and that Barr had suppressed investigative summaries the special counsel’s office had written for public release.

Facing mounting criticism, Barr has begun to backtrack and wobble. On March 29, he penned another missive to Congress, claiming that his March 24 letter “was not, and did not purport to be, an exhaustive recounting of the Special Counsel’s investigation or report.” He also pledged again to release the report, but with copious redactions covering grand jury testimony, along with material that could compromise national security and ongoing investigations, and information that might infringe on the personal privacy of “peripheral third parties.”

That is by no means enough.

If Barr had any integrity, he would retract his March 24 letter and immediately seek a court order permitting maximum release of the Mueller report. He’d turn the report over to Congress for further deliberations, including possible impeachment. After that, he would recuse himself from any further oversight of the Mueller probe. Until then, he will always be suspected of a cover-up and more than a little, dare we say, collusion of his own.