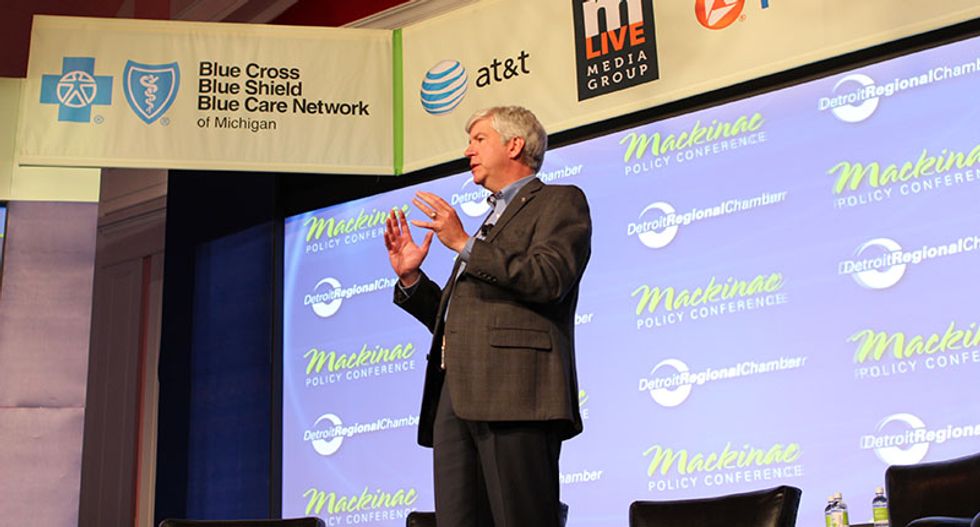 A federal judge on Monday—who agreed that allegations of "conscience shocking" conduct claimed by plaintiffs were "plausible"—reinstated Michigan's former Governor Rick Snyder as a defendant in a class action lawsuit by the victims of the water crisis in the city of Flint that first captured national headlines in 2014.

After earlier removing Snyder from the suit, brought by city residents harmed by the poisoning of the municipal water supply, U.S. District Court Judge Judith Levy reversed that decision as she noted the plaintiffs had shown the allegations against Snyder and his fellow co-defendants "plausibly describe 'conscience shocking' conduct" as the people of Flint were stripped of 14th Amendment protections from bodily harm or injury.

The plaintiffs in the suit, Levy wrote in her ruling,

plausibly state that the Governor acted indifferently to the risk of harm they faced, demonstrating a callous disregard for their right to bodily integrity. This indifference manifested itself in two ways. Initially, the Governor was indifferent because instead of mitigating the risk of harm caused by the contaminated water, he covered it up. In private, he worried about the need to return Flint to DWSD water and the political implications of the crisis. But in public, he denied all knowledge, despite being aware of the developing crisis."

As a result, plaintiffs were lured into a false sense of security. They could have taken protective measures, if only they had known what the Governor knew. Instead, the Governor misled them into assuming that nothing was wrong. Governor Snyder's administration even encouraged them to continue to drink and bathe in the water.

The legal team representing the plaintiffs welcome the judge's determination.

"We are grateful that the Court agrees former Governor Snyder should be held accountable for his role in the Flint water crisis," said attorney Theodore J. Leopold, co-lead for the plaintiffs.

"The citizens of Flint were both forgotten and mistreated by those involved in the Flint water disaster," Leopold added. "To this day, residents continue to suffer because of the reckless decisions of senior state and local officials, as well as private contractors, and we hope to provide a measure of justice and some much-needed relief to those still struggling to recover."

According to a statement from the plaintiff's legal team, the complaint submitted to the court alleged that Snyder and his staff were aware of the health risks associated with the city's transition to Flint River water, including the risk of Legionnaires' disease, for months before an official announcement was made and that they concealed this information from the public. Overall, the lawsuit charges that officials from the state of Michigan, the city of Flint, Genesee County, and two private engineering firms created the public health crisis and did so while making calculated decisions that "deliberately exposed" residents of Flint to the harmful health effects of lead and other toxins.

"Rather than moving swiftly to protect the children and families of Flint, the state engaged in a cover-up which tragically led to preventable injuries and deaths of innocent Flint residents," added Michael L. Pitt, the other co-lead in the case. "Those responsible for creating and prolonging the Flint Water crisis will be held accountable."