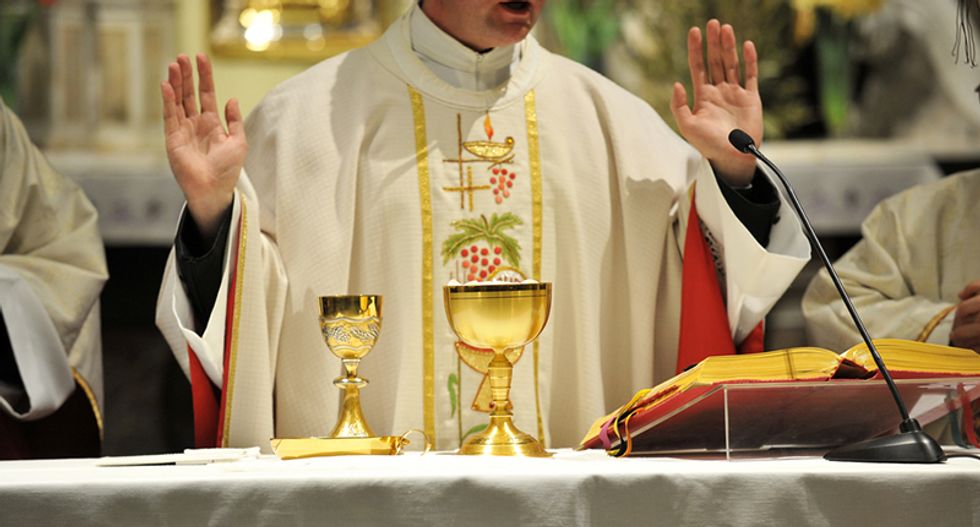 Royalty-free stock photo ID: 462646417. Golden chalices on the altar with priest in the background.
Katherine Dugan
,
The Conversation
and
Katherine Dugan
April 08, 2019

More than 20% of all adults and over a third of millennials in the United States are not affiliated with a religion. For at least a decade, this number has been on the rise.

Sexual abuse by clergy and a poor response by the church hierarchy has led many young Catholics to lose trust in their religious institution. Some 36% of those without religious affiliation report having grown up Catholic.

But countering this trend is a movement led by millennials who are devoted to bringing Catholicism back on college campuses – with a modern flair.

I have spent the the last seven years researching these young adults. These millennials are Catholic, and being Catholic is more central to their identity than many of their peers.

These missionaries follow church teachings with an adherence more common with the baby boomers and the Silent Generation. They attend Mass every week, go to Confession frequently, memorize Latin prayers and are devoted to saints. As college campus missionaries, they spend their days inviting college students to be similarly committed to Catholicism.

Though a minority among the millennial-generation Catholics, they are part of a movement that has been running parallel to mainstream U.S. Catholicism for just over 20 years.

Known as the Fellowship of Catholic University Students, or FOCUS, the movement started in 1998 when two male and two female college graduates began working as Catholic missionaries at Benedictine College and the University of Northern Colorado. As students, they had seen the decline in Catholic practice among their peers and wanted to promote an attractive version of Catholicism.

Following the example of Protestant groups like Cru and Athletes in Action, FOCUS began holding Bible studies on campuses. They trained increasing numbers of missionaries to build friendships with college students. As missionaries worked to make Catholicism look relevant to college students, FOCUS established itself as a religiously affiliated outreach program.

Over the course of the next two decades, FOCUS grew rapidly. At first, it was through word of mouth between bishops and priests. Gradually, as more college students attended FOCUS events and began participating in Catholic ritual life, campus ministries on private, Catholic and public universities and campuses began to request a FOCUS team.

Who are these missionaries?

FOCUS partners with Catholic centers on campuses and recruits college students to become missionaries after graduation. Each missionary spends two years on a campus, working with students, promoting Catholicism. Many of the college students that missionaries reach out to describe themselves as “spiritual but not religious,” or a “none.”

The missionaries are much like any other middle-class young adult in the U.S.: They live on their iPhones, drink craft beer, buy pumpkin spice lattes and love March Madness. Some even have tattoos, often with quotes from saints.

They go through much the same relationship issues as other young adults. I interviewed over 50 missionaries about their experiences. Over cups of coffee or while jogging, they shared with me their struggles with depression and alcohol abuse. They also shared the pain of losing intimate friendships.

What sets them apart, however, is that unlike most other millennials, they find answers to life’s struggles in being Catholic. And they want others to know that as well.

One missionary, for example, told me, “I have seen change in my life” since becoming more Catholic in college. Another said it was hard for him to watch college students suffer with anxiety. “I just know,” he told me, “their lives could be better with Catholicism.”

They present Catholicism as relevant and “cool.” I heard stories about missionaries hosting foam parties and black-light parties – flashy dance parties that are popular on college campuses.

One missionary told me how she trained for a popular test of physical strength called a Tough Mudder with some college students. Another explained how he used games of pickup basketball to make friends with college students. They also planned gender-segregated camping trips and tailgate parties before sporting events.

In addition to these typical college campus events, these Catholics invited students to prayer, Bible study and to attend Mass.

Media reports have described the fast growth of FOCUS in just two decades into an organization with 660 missionaries on 137 campuses. It is spread across 38 U.S. states and at four international locations. In my own work, I watched a campus program in the Midwest grow from nothing to a group of 20 students within the first year.

This year, in perhaps the largest five-day gathering, called SEEK2019, some 17,000 Catholics, which included college students and other young adults, met in Indianapolis.

But critics have also pointed out serious concerns with how FOCUS works. There is a lack of racial diversity among missionaries, who mostly belong to the white middle- and upper-class.

In informal conversations with campus ministers, I have heard concerns about a lack of formal pastoral training given to missionaries. FOCUS missionaries receive just four to six weeks of training over the summer. Their attention to making Catholicism attractive through friendship with “nones” and other college students has also made them inattentive to Catholicism’s emphasis on social justice. On a large, public campus, I observed a program close down because of disagreements between the campus ministry and the FOCUS over how to best reach college students.

Nonetheless, at a time when young Catholics are moving away from their faith, the role of missionary organizations such as FOCUS is worth noticing.