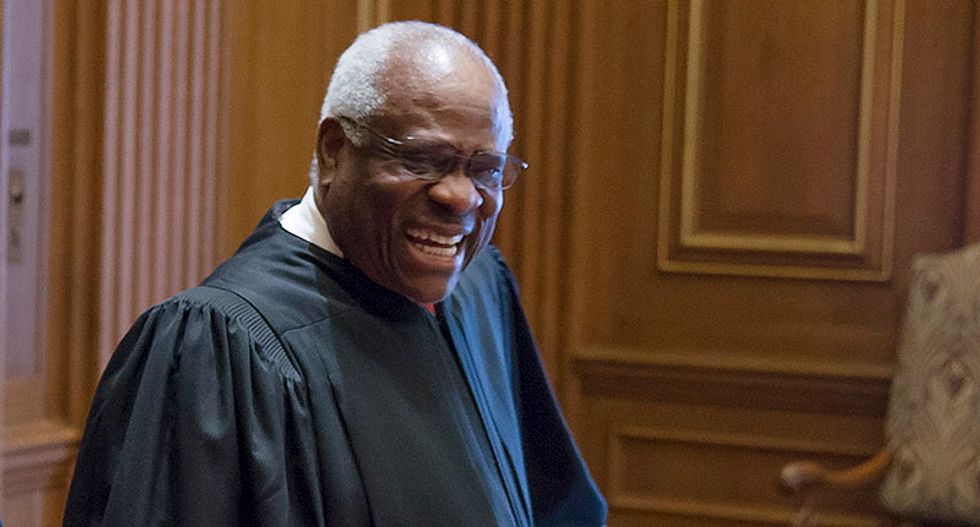 Sonny Perdue is sworn in as the 31st Secretary of Agriculture by U.S. Supreme Court Justice Clarence Thomas with his wife Mary and family April 25, 2017, at the Supreme Court in Washington, D.C.. Photo by Preston Keres
Julia Conley
and
Common Dreams
April 24, 2019Video

Civil rights advocates decried the Trump administration's attack on immigrant rights and marginalized communities Tuesday as the Supreme Court heard arguments regarding the potential addition of a citizenship question to the 2020 census.

The nation's highest court began deliberating Commerce vs. New York, hearing from a number of rights groups who oppose Commerce Secretary Wilbur Ross's effort to add the question, "Is this person a citizen of the United States?" to the 10-year survey of all U.S. residents.

The court's more liberal judges and a number of critics argued that the question would result in an inaccurate count of U.S. residents, with many in immigrant communities declining to respond for fear of the Trump administration's aggressive anti-immigration agenda.

"This case isn't just about a line on a form," said Dale Ho, director of the ACLU's Voting Rights Project, after addressing the court. "It's about whether or not everyone in America counts. The administration's own estimate is that if you put this question on the census, 6.5 million people won't get counted."

Three federal judges have blocked the addition of the question, which has not appeared on a U.S. census since 1950.

Ross broke federal law when he moved to add the question, Judge Jesse Furman argued in his January ruling in the Southern District of New York. The commerce secretary claimed the question had been requested by the Justice Department in order to ensure proper enforcement of the Voting Rights Act. Ross had in fact asked the DOJ to make the request, Furman said.

"There needs to be a reason to add the question, and I don't see any reason," Justice Elena Kagan said Tuesday. "It did seem the secretary was shopping for a need."

The Trump administration argues that the citizenship question is needed to ensure proper enforcement of the Voting Rights Act—an argument Justices John Roberts and Brett Kavanaugh reportedly appeared prepared to accept on Tuesday.

In addition to concerns about why and how Ross attempted to add the question, civil rights groups say the citizenship question would have grave implications for marginalized communities beyond 2020. The 10-year survey of all residents in the U.S. is used to determine how many representatives states have in the U.S. House, as well as appropriations of federal funding for local governments.

"The decisions about where to build hospitals, schools, roads, and add new businesses are linked to the decennial count of the population," said the New York Immigration Coalition in a statement. "The distribution of more than $700 billion in federal resources is also tied to the census."

"The facts are clear: the census is simply an enumeration of residents, as constitutionally mandated," said Steven Choi, executive director of the New York Immigration Coalition. "Adding the citizenship question will have an especially chilling effect on communities of color, depriving immigrant-rich states of federal dollars and political representation, while virtually erasing our communities."

Common Cause, Planned Parenthood, and Make the Road New York were among the groups who assembled outside the Supreme Court to call on the justices to reject the addition of the question.

The Supreme Court is expected to hand down a ruling on Commerce vs. New York by late June.

"The citizenship question is a bald-faced attempt to racially rig the census, undercount communities of color, and undermine fair representation which our democracy relies upon," said Common Cause president Karen Hobert Flynn. "We trust the Supreme Court will act decisively to end this blatant abuse of power for partisan political gain. The eyes of the nation are upon the Justices."