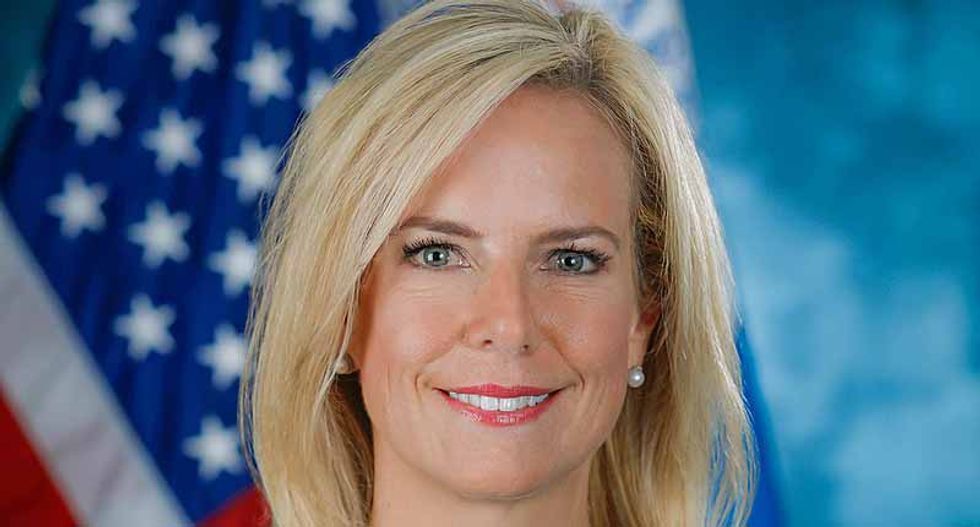 Former Homeland Security Sec. Kirstjen Nielsen may be gone but some of her lies apparently continue to roam government agencies like zombies, following a Monday tweet from Immigration and Customs Enforcement claiming that “fake families are being formed to cross our border and avoid detention.” That was then amplified in a tweet from one Republican House member.

But ICE provided no proof to back up this “fake families” claim, just like when the agency provided no evidence when Nielsen made her claim to Congress in March that "recycling rings" were reusing children to cross the southern border, which she repeated on state propaganda television the next month. “We’ve broken up so-called ‘child recycling rings,’ if you can believe it, in the last couple months,” she told Fox News’s Tucker Carlson, a favorite of white supremacists. “Once they get in … they send the child back, and bring the child back with another family, another fake family.”

However “Nielsen did not offer any evidence to back up her assertion” to Congress, BuzzFeed News reported, “and it was unclear how prevalent the so-called recycling rings are. DHS and [ICE] spokespersons did not provide any specific instances where such activity took place.” Attorney Aaron Reichlin-Melnick tweeted “As far as I can tell DOJ hasn't filed a single trafficking indictment related to so-called ‘fake families,’ despite DHS very public yelling about this alleged crisis for months now.”

ICE could easily erase any doubts by showing the receipts and turning any and all evidence of these so-called fake families over to Congress and to the public, but that would undermine an agency that already has a history of pushing anti-immigrant propaganda, wouldn’t it? And it’s not like the administration gives a crap about families in general. Only under court order are officials now working to identify possibly thousands additional kids stolen from families at the southern border.