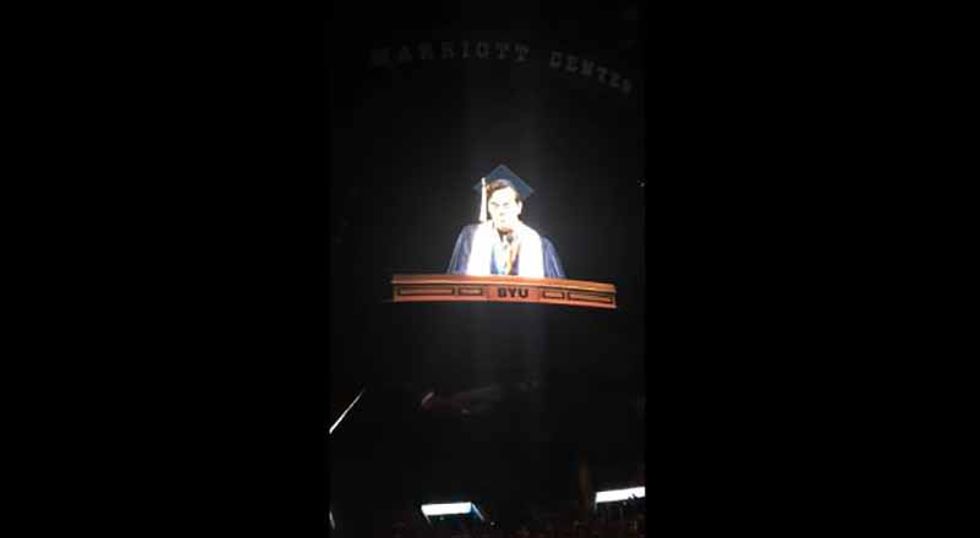 A valedictorian for the top university of the Church of Jesus Christ of Latter-day Saints stunned families, faculty, and friends on Friday when he announced he is gay.

“I stand before my family, friends and graduating class today to say that I am proud to be a gay son of God,” Matthew Easton, 24, declared at Brigham Young University's graduation ceremony.

His acknowledgment was met with cheers and applause by many.

“I am not broken,” he said, as The Washington Post reports, sounding choked up. “I am loved and important to the plan of our great creator. Each of us are.”

“Four years ago, it would have been impossible for me to imagine that I would come out to my entire college,” Easton, who goes by "Matty" on social media, noted. “It is a phenomenal feeling. And it is a victory for me in and of itself.”

The Mormon Church has a horrific history of not only not supporting LGBTQ Mormon, but going outside of its community to attack issues like marriage equality, which it has done for decades.

So it might have surprised some when Easton kicked off his speech and early on offered congratulations to a wide variety of people, including his fellow students of color and his "LGBTQ friends."

That elicited a "whoop," cheers and applause from the audience, including Easton's sister.

"You are seen. You are loved," he told them all. And he talked about "coming to terms, not with who I thought I should be, but who the lord has made me."

The LDS Church worked diligently to ensure the passage of California's Prop 8 in 2008. Before that, it scuttled same-sex marriage in Hawaii, and reportedly has supported organizations dedicated to rolling back civil rights for LGBT people.

In 2015 the Church declared children of same-sex parents would be barred from the most definitive ceremonies the Church offers, and their parents would be "apostates" – heretics, in the vernacular. It was forced to literally declare God had changed his mind earlier this month, after reported suicides and tremendous outrage.

That change was not, by any means, an embrace of same-sex marriage or LGBT people, but some say they see a softening towards LGBT Mormons.