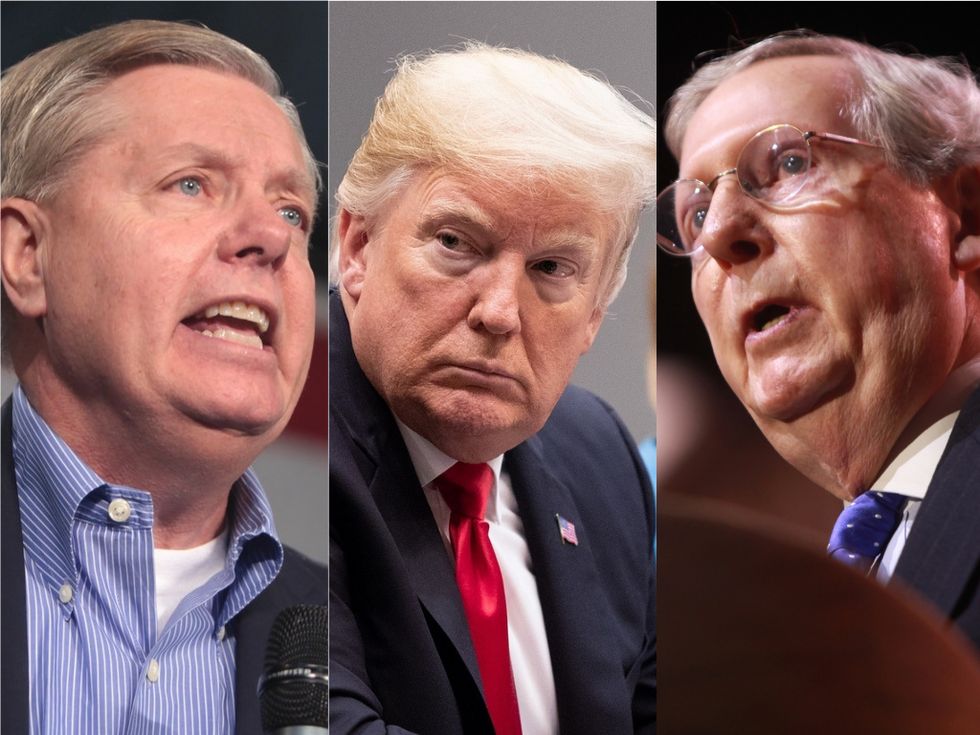 When President Bill Clinton had an extramarital affair with White House intern Monica Lewinsky in the 1990s and lied about it under oath, many prominent Republicans insisted that his actions were unforgivable. The former Arkansas governor, they stressed, had disgraced the presidency and needed to be removed from office. And a Republican-controlled House of Representatives, under the leadership of Speaker Newt Gingrich, voted to impeach Clinton in late 1998, although he was acquitted on perjury and obstruction of justice charges in a Senate trial in February 1999 and served out the rest of his second term. But Clinton’s GOP critics of the 1990s have been singing a very different tune under President Donald Trump, defending him vigorously at every turn.

Here are some prominent Republicans who demanded Clinton’s impeachment in the 1990s, but don’t feel that way about Trump now.

Trump has been claiming that special counsel Robert Mueller’s final report for the Russia investigation proves he never committed obstruction of justice, but that isn’t what the report actually says. Mueller’s report doesn’t accuse Trump of obstruction of justice, but it doesn’t rule out the possibility either. And while obstruction of justice isn’t a possibility that worries Sen. Lindsey Graham now, it is something that worried him a great deal in 1999—when the South Carolina senator said of Clinton, “He is the chief law enforcement officer of the land. He encouraged people to lie for him. He lied. I think he obstructed justice.”

Graham voted “guilty” in Clinton’s Senate trial 20 years ago, and it was a vote he was proud of.

The Mueller report laid out the lengths that President Trump went to impair the investigation. The President's cong… https://t.co/ZIAft3pox6
— The ReidOut (@The ReidOut)1555975695.0

Long before he became Senate majority leader, Kentucky Republican Mitch McConnell was a fierce partisan. In 2019, McConnell joins Trump in saying that calls for his impeachment are shamelessly partisan grandstanding on the part of Democrats. But a video from 1998 shows McConnell declaring that thanks to Clinton, the U.S. was facing a “serious and deeply troubling crisis.” McConnell declared, “This is a crisis of confidence, of credibility and of integrity. Our nation is indeed at a crossroads: will we pursue the search for truth, or will we dodge, weave and evade the truth?”

More than any other Republican in the House of Representatives, Gingrich pushed for Clinton’s impeachment in 1998. But the former House speaker is now a staunch Trump defender, insisting that Mueller’s Russia probe was a waste of law enforcement resources and that post-Mueller report, the U.S. remains “trapped in a cycle of media madness” that “is crippling the country, maximizing partisan divisions.” In a piece for Fox News’ website published on April 20, Gingrich praised “President Trump’s ability to ignore the madness and focus on leading the country”—whereas in 1998, Gingrich was obsessed with seeing Clinton removed from office and sticking it to the Democratic Party any way he could.

During his years as a U.S. senator, Pennsylvania Republican Rick Santorum was a strident culture warrior — and when he voted “guilty” during Clinton’s Senate trial, Santorum was insuring social conservatives that he wasn’t afraid to stand up for morality. But in 2019, Santorum, now a CNN commentator, has been a consistent defender of Trump and has said that if Trump lies, it’s no big deal. The Mueller report, Santorum insists, turned out to be a “nothing burger.”

After the release of the Mueller report, Sen. Chuck Grassley (who heads the Senate Finance Committee) declared, “President Trump has been cleared of collusion and obstruction of justice” — and the Iowa Republican has called for an investigation of “Trump’s political opponents.” But in February 1999, Grassley was among the Republicans who voted to convict Clinton in his Senate impeachment trial. Twenty years ago, Grassley said of Clinton, “I’m smart enough to know that the president has done wrong, and I want the people to know that—and I want history to know that we don’t want a president lying in office.”