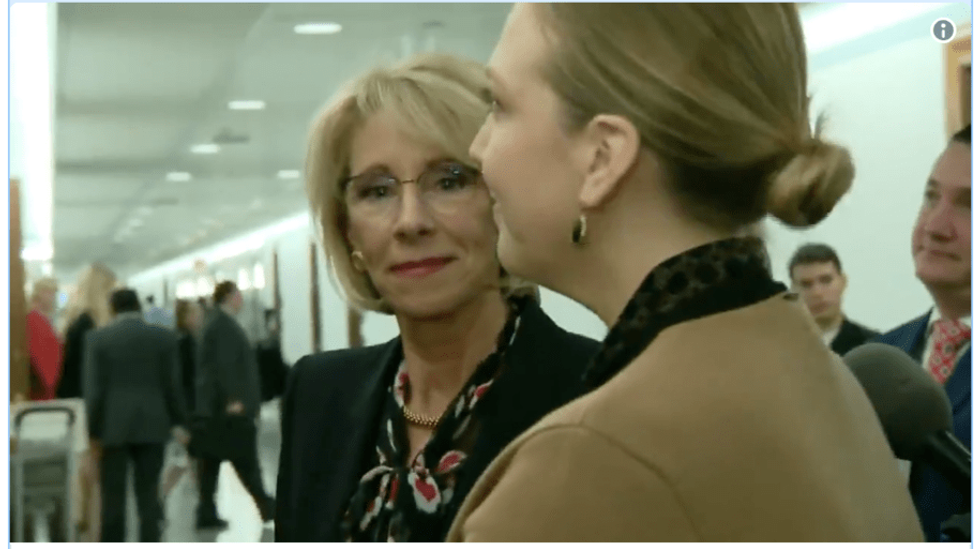 Secretary of Education Betsy DeVos has once again been garnering terrible headlines for the Trump administration. The billionaire heiress, whose family were some of Donald Trump’s largest donors during the 2016 campaign, sat before a subcommittee of the House Appropriations Committee to defend slashing $18 million from Special Olympics funding, as well as other significant cuts to other special-needs education funds.

The blowback was swift as Democrats lined up to take their shots in the committee meeting. Even some Republicans recoiled. Sen. Roy Blunt (Missouri), a former teacher himself, quickly came out and said the funds would not be slashed.

DeVos issued a statement to "correct the record", but it really was just a defense of the cuts. She doubled down, saying that, “given our current budget realities, the federal government cannot fund every worthy program, particularly ones that enjoy robust support from private donations."

And then, just like that, Donald Trump changed his mind and publicly turned on his education secretary to promise that the Special Olympics budget would not be slashed. He left DeVos hanging in the wind.

That leads us to this absolutely cringeworthy two minutes and 18 seconds of CNN digital video producer Daniel Lewis catching up to DeVos in the halls of Congress to ask about the cuts, whose idea they were, and more. Hats off to Lewis for continuing to ask questions, even as it got increasingly awkward. And I do mean increasingly awkward. WATCH:

This is not a functional government. DeVos has a duty to answer questions. Donald Trump has a Cabinet full of people who are not accountable to the public. They serve special interests and their own agendas with no concern for transparency. Of course, it’s ironic and infuriating that Donald Trump ran on “draining the swamp.” There has never been a more blatant sell-out of our government agencies in the history of the country. He didn’t drain the swamp; he made it bigger.

Our students and teachers deserve better than Betsy DeVos. It’s time to buckle up and get to work on 2020 so we can send her back to her Michigan megamansion.

Here’s an infuriating update. DeVos claimed that she personally had donated to the Special Olympics over the years. Mmmkay.

Betsy DeVos called for the rich to fund the @SpecialOlympics. Her charity, which gives $10M a year to right-wing ca… https://t.co/UKzKtjtYbu
— American Ledger (@American Ledger) 1553870172.0