Vacuous looters: How Jared and Ivanka epitomize the Trump presidency — and mess with the world as if it's just another con game 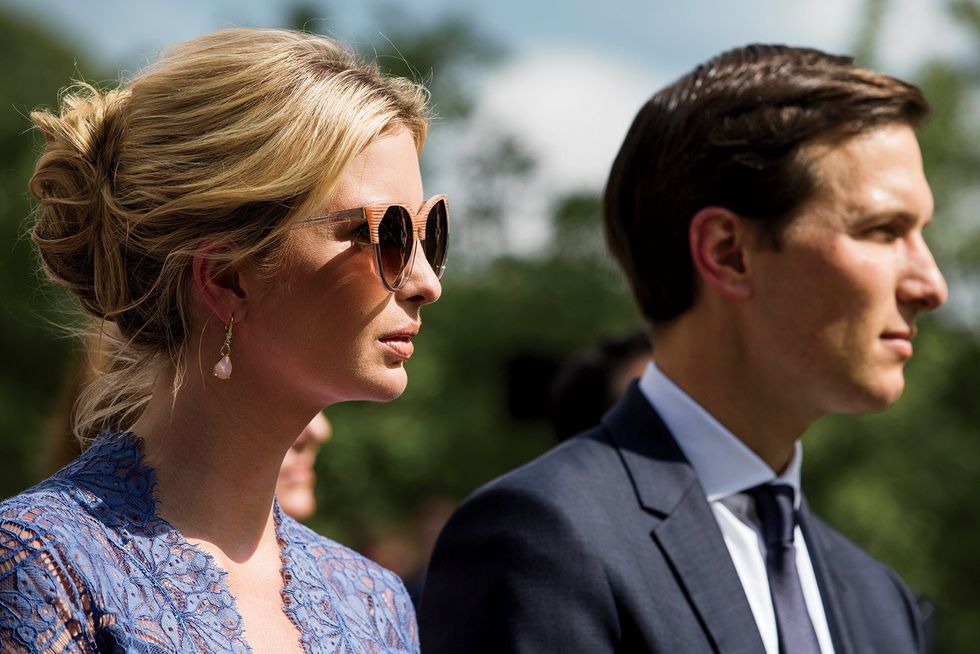 They were careless people, Tom and Daisy -- they smashed up things and creatures and then retreated back into their money or their vast carelessness, or whatever it was the kept them together, and let other people clean up the mess they had made.

In the new book "Kushner, Inc." by Vicky Ward, Jared and Ivanka -- people so famous everyone refers to them by their first names -- are revealed as exactly what one would expect: spoiled, arrogant, narcissistic, corrupt and recklessly overconfident. As tempting as it is to mock them, it would be a mistake. These two vacuous socialites are a perfect reflection of the inept celebrity president who sits in the White House where all three wield unimaginable power over the lives of every person on this planet.

This article originally appeared on Salon.

For Donald Trump to bring his daughter and son-in-law into the White House at all is inappropriate. Everyone knows that nepotism is a poison in any organization but it becomes truly noxious in one as chaotic as the Trump administration. You can't fire your own relatives if they screw up, and the hierarchy is always skewed by their special access to the top. It's possible that a mature, seasoned, intelligent leader could handle such a situation with some finesse. Needless to say, President Trump is not that.

I think most people believed early on when he brought the two into the administration that it was more a security blanket than anything serious. He didn't really understand how the government or the presidency worked and it was understandable that he would want some people around him to confide in and help him get his bearings. Nobody, however, expected that he would defy all logic and actually task them with anything important but he did. Apparently, they both were perfectly happy to take the ball and run the world with it, despite having virtually no experience doing anything but working in their family businesses and running from one disaster after another.

According to Ward, these two callow scions have no doubts about their abilities. She writes of Ivanka that “her father’s reign in Washington, D.C., is, she believes, the beginning of a great American dynasty." Ivanka herself apparently told former White House economic adviser Gary Cohn that she expected to be president someday. (As I recall, it was reported at one time that she and Jared had chattered among friends about which one would be president first.) Did I mention they are arrogant?

Ward makes it clear that the image of "Javanka" being moderating influences in the administration is nothing more than hype. We've known from the beginning that the two are quite adept at playing the media but it appears that in reality they don't just fail to moderate Donald Trump, they don't believe they have to. Perhaps the most widely shared anecdote in the book happened after the president's ghastly remarks about the neo-Nazis in Charlottesville. Her response to Cohn's concerns was to say, “My dad’s not a racist; he didn’t mean any of it. That’s not what he said.”

Considering the president's utter lack of concern over the international white nationalist movement that has inspired a number of horrific mass killings, including the shocking massacre last week in New Zealand, it's pretty clear that Ivanka either doesn't know her father or just doesn't care. Either way, any sense that she's "the empathetic one" can be put to rest.

As for Jared, he's been given the portfolio for world peace. He seems to believe that he is preternaturally capable despite never having done much of anything aside from running a vanity newspaper and nearly running his family's real estate empire into the ground. Much like his father-in-law, he does appear to be willing to go to any length to wriggle out of a jam. Being at the right hand of the president of the United States has offered him plenty of opportunities.

Even while serving in the White House, Kushner had no compunction about meeting with Chinese bankers and representatives for the sovereign wealth fund of Qatar to secure a loan for a white elephant building that was about to bankrupt his family business. The book describes former Secretary of State Rex Tillerson telling Kushner that his advice to the president to endorse Saudi Arabia's aggressive diplomatic and strategic campaign against Qatar, an important American ally, "had endangered the US." There is no evidence that Kushner cared. He got his loan.

It's hardly surprising that every U.S. intelligence agency strongly urged that Kushner not be given a security clearance. According to the book, Tillerson had heard "chatter" between Kushner and his buddy, Saudi Arabia's Crown Prince Mohammed bin Salman, belittling Tillerson. Whatever Jared has been up to, the intelligence community probably knows about it. None of that mattered. The president overruled his intelligence chiefs and gave both Jared and Ivanka the top security clearances they shouldn't have.

What comes through most clearly in the book is that these people do not understand the way the law or national security work. From barging into confidential meetings with attorneys to using their own email addresses -- after pillorying Hillary Clinton for doing the same thing -- to treating anyone and everyone with total disdain and disrespect, they wander through the White House at will, wrecking centuries of protocol and wreaking chaos, serving themselves above all. They're not actually helping the president do the right thing, not that they would know how to. They don't know what the right thing is. Neither do they care.

But like Donald Trump, his daughter and son-in-law seem to have a feral survival skill. Nearly everyone with any qualifications has butted heads with the two of them, and even the president apparently tried to figure out a way to get them to quit. But they have hung in there and outlasted virtually everyone else in Trump's inner orbit.

These two people are recklessly messing with the world as if it's just another con game, in which they'll take their profits before moving on to the next chapter of their spoiled, mindless lives. It's not at all obvious that the mess they are making will be fixable.