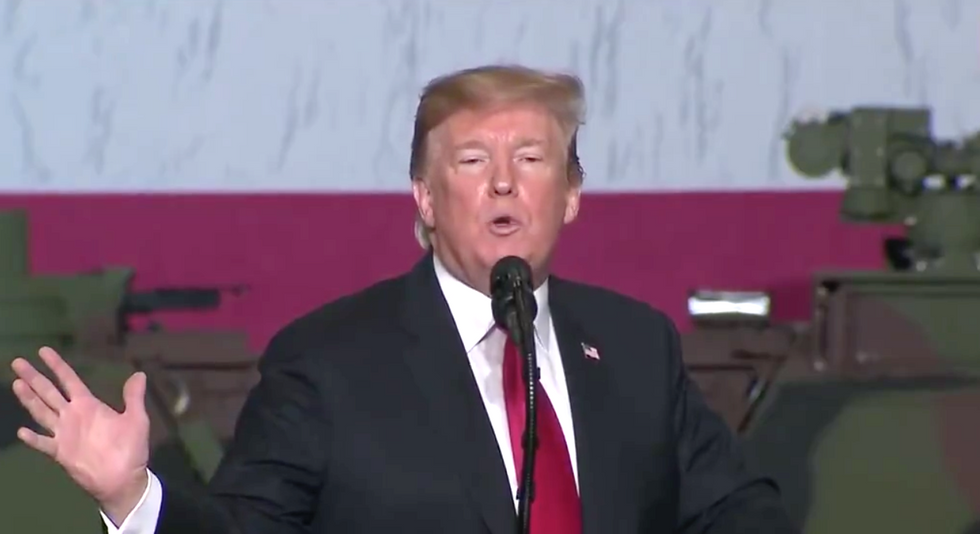 For some reason, he just can't let this go.

On Wednesday, while speaking at the Lima Army Tank Plant in Ohio, President Donald Trump once again tore into the late Sen. John McCain (R-AZ).

He seems particularly perturbed at the fact that McCain, who died about seven months ago after struggling with brain cancer, turned over the Steel Dossier to the FBI, a collection of raw intelligence reports that claimed Russia had leverage over Trump during the 2016 campaign. It was, of course, a responsible and reasonable reaction to hand such explosive allegations over to investigative authorities, and the bureau, in fact, already had the information. But Trump has decided to repeatedly attack the late senator for this decision and lie about the context, claiming falsely that McCain turned it over before the 2016 election, rather than after.

And as he has before, Trump blamed McCain for voting against the GOP's plan to overhaul Obamacare in 2017, even though Sens. Lisa Murkowski (R-AK) and Susan Collins (R-ME) rarely face his ire for voting along with the late Arizona lawmaker.

But Trump added a new, bizarre twist to his tirade against McCain on Wednesday, claiming that as president, he had to approve the senator's funeral.

"I gave him the kind of funeral that he wanted, which as president, I had to approve," he said. "I don't care about this, I didn't get a thank you — that's okay. We sent him on the way. But I wasn't a fan of John McCain."

He blamed the press for bringing up McCain, but there was no need for him to talk about it during the speech. And even when asked directly about the senator, he could simply say no comment instead of attacking a dead man. Such attacks do nothing to actually hurt McCain, of course, but they can continue to cause his family distress — a pointless and cruel act.

But Trump has never shown the least amount of respect or decorum regarding McCain or his family. In 2015, Trump infamously attacked McCain's military record, saying that he's only considered a war hero because he was captured and held prisoner in Vietnam.

And when McCain died, Trump initially resisted ordering the flag to be lowered in his honor.