The power of angry women: How women’s anger is deflected in patriarchal society — and its political might 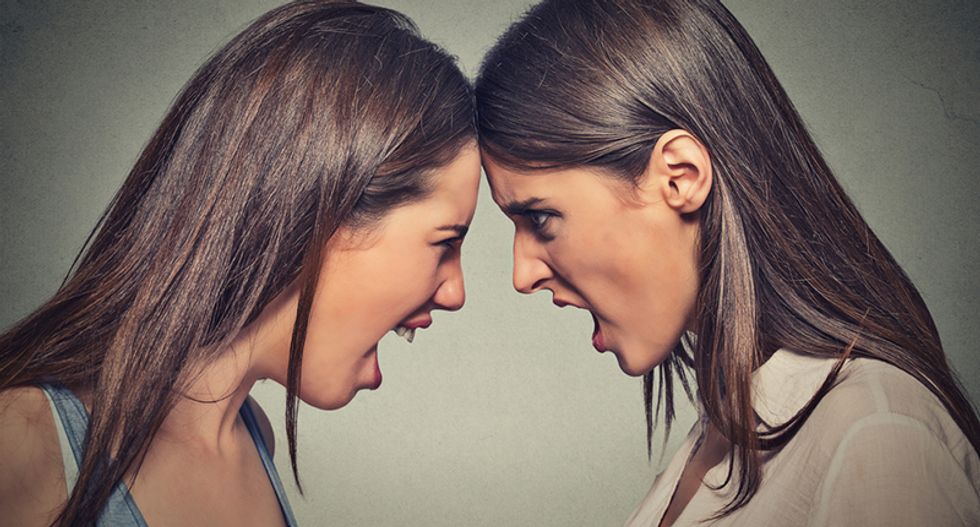 Recent books by Rebecca Traister, Soraya Chemaly, and Brittney Cooper address the particularly superpowerful way women are feeling these days. From different perspectives, they each examine the way women’s anger is deflected in patriarchal society and its potential for political impact—past, present, and future.

The anger window was open. For decades, for centuries, it had been closed. Something bad happened to you, you shoved it down, you maybe told someone but probably didn’t get much satisfaction—emotional or practical—from the confession. Maybe you even got blowback. No one really cared, and certainly no one was going to do anything about it.

But in the four months that followed the reporting on one movie mogul’s sexual predation, a Harvey-sized hole was blown in the American news cycle, and there was suddenly space and air for women to talk—to yell and scream and rage. …

Some of those who spoke did so to friends or family members or to other colleagues, many for the first time. Some women lodged complaints, years later, with HR departments. Some spoke to reporters, providing corroborating evidence, contemporaneous witnesses, photographs, and diaries for documentation; they showed their nondisclosure agreements and settled lawsuit filings; they produced the friends and husbands they told at the time, though many, many of them had told no one.

Then there were others who simply took the things that had always been private, quiet—the whispers, nudges, and meaningful stares that had served as warnings—and made them public and loud, with no mediation; they wrote their stories on social media, in tweets and Facebook posts that could be sent around the world in seconds. Some women in the media compiled a shared document, anonymously detailing their encounters with “shitty men” in their industry—men they named. It was dangerous and irresponsible and a sign of exactly how desperate, how utterly, profoundly furious they were, and how out of fucks they were about letting the world know. —Rebecca Traister, Good and Mad: The Revolutionary Power of Women’s Anger, Simon and Schuster, 2018

Individualized acts of eloquent rage have limited reach. But the collective, orchestrated fury of Black women can move the whole world. This is what the Black Lives Matter movement has reminded us. There is something clarifying about Black women’s rage, something essential about the way it rolls down to the core truth. The truth is that Black women’s anger is not the problem. “For it is not the anger of Black women,” [the writer Audre] Lorde tells us, “which is dripping down over this globe like a diseased liquid. It is not our anger which launches rockets … missiles, and other agents of war and death.” “Anger,” she said, “is an appropriate response to racist attitudes.” #AudreLordeTaughtMe …

Whether we are at work, at church, at school, in court, in the halls of government, or in the streets, the rage of Black women and girls does the necessary work of pushing American democracy forward, of exposing its flaws, of dramatizing its injustices, of taking its violent beatings. Black women’s rage isn’t always healthy, particularly when we turn it on ourselves or on our children. But when we turn it outward and focus it on the powers that would crush us into submission and give back to us a mangled image of ourselves, Black women’s rage is a kind of power that America would do well to heed if it wants to finally live up to its stated democratic aims. —Brittney Cooper, Eloquent Rage: A Black Feminist Discovers Her Superpower, St. Martin’s Press, 2018

Be brave enough to stop pleasing people, to be disliked, to rub people the wrong way. In many environments, all you have to do to be castigated as an angry woman is to say something out loud, so you might as well say exactly what’s bothering you and get on with it. This means that, usually, you have to come to terms with not always being liked. Your anger and assertiveness will make some people unhappy, uncomfortable, sensitive, cautious. They will resent you, your thoughts, your words. They will hate your willingness to risk social connections and challenge social conventions. Be prepared to be labeled humorless, difficult, a spoilsport, and a ruiner of parties, meetings, dinners, and picnics.

There is discomfort in understanding. There will always be people who are deeply uncomfortable with your anger. They will attempt to diminish what you say by disparaging your choice of expression. This is a kind of laziness and a sure symptom of dismissal, and sometimes, abuse. If someone does not care to consider why you are angry, or why anger is your approach to a specific event or problem, then that person is almost certainly part of the problem. Among women, this dismissal often comes from the desire not to identify with “victimhood,” and your anger, as a marker of social difference and disadvantage, is a challenge to that concept. Demanding fairness and describing a problem doesn’t make you a “victim.” Silencing, denial, mockery, intimidation, and callousness might, though.

It helps, in these circumstances, to think of the difference between being nice, which girls are taught to do at all costs, and being kind. Nice is something you do to please others, even if you have no interest, desire, or reason to. Kindness, on the other hand, assumes that you are true to yourself first. —Soraya ­Chemaly, Rage Becomes Her: The Power of Women’s Anger, Atria Books: Simon and Schuster, 2018