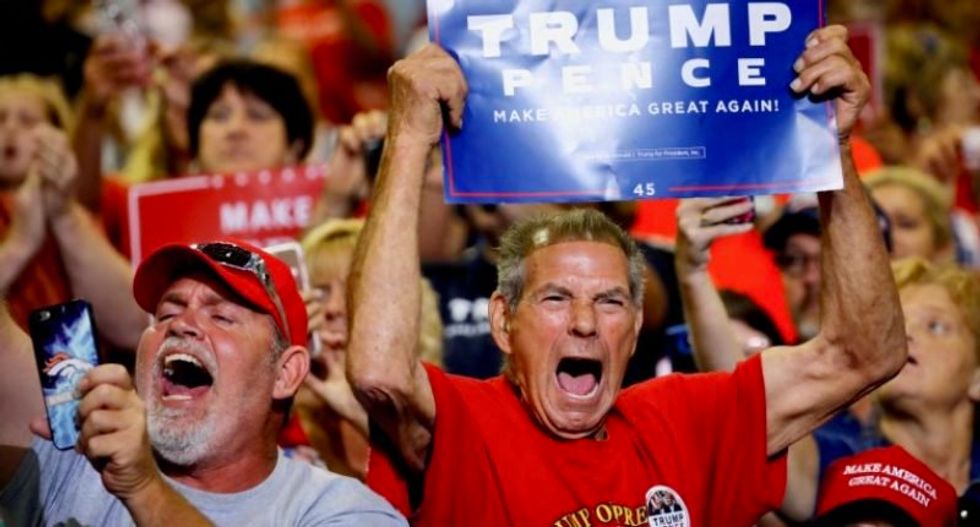 I am a ferociously independent  and passionately moderate voter. But in 2016 I voted a straight party ticket for the Democrats. It was the only way - however meek - to send a message to the Republican Party: You gave us Trump, shame on you, now get rid of him.

But Republican legislators, who have much to lose in the long run, cave in to the Trump base fearing they might be “primaried” and lose their seats, and give the disaster that is the Trump presidency a free pass.  They are wrong morally and politically to do so.  What happened to the Republican Party? Where is it hiding?  Wherever you are, come back, we need you badly.

Part of the problem is that many Republicans confuse Donald Trump with a Republican. He is not a party president, and barely a party member. He is instead, the leader of a cult. This transformation was noted a few months back by then Republican Senator Bob Corker of Tennessee, who openly asked if his party was “becoming a cultish thing”.  Donald Trump does not represent traditional Republican values, policy positions, or core principles such as limited government, individual freedom, respect for democratic norms, freedom of expression and press, active and strong democratic alliances, a pro-democracy foreign policy, and the dignity of public service.  No, this is not your daddy’s Republican Party, it is Trump’s personal cult.

As the Republicans morph from national party to cult of personality, it might be useful to reflect on the role cults have played in American politics.  Ordinarily, when we think of cults we think of religious cults, but there have been political cults in America as well (see: Dennis Tourish and Tim Wohlforth’s ON THE EDGE: POLITICAL CULTS RIGHT AND LEFT, 2000).  Not surprisingly, cults have had a very short shelf-life in the United States. A largely pragmatic, non-ideological nation, Americans have been suspicious of extremism and narrow politics. Part of the reason for the failure of cults to catch on in the U.S. can be seen in Alexis de Tocqueville’s 1835 reminder in DEMOCRACY IN AMERICA that “the spirit of association” exerts a powerful influence in the United States, and that such associations, often cross-cutting ideologically and politically, help produce a more moderate and perhaps even a more tolerant political atmosphere.

Parties in the U.S. have succeeded by being “big tents" that are somewhat inclusive, large, and centrist (center –right for the Republicans, center-left for the Democrats). By contrast, cults are narrow, extreme, and exclusive. Traditionally, parties served as gatekeepers keeping radical extremists at the fringes and not allowing them to capture the party.  In Europe, the rise of fascism in the 20th Century was seen by many as a cult movement, and in North Korea today, some see the 60 year rule of the Kim family as a three-generation “cult of personality." But in the United States, such takeovers by cults have been largely unknown.

What are the key characteristics of a cult, and how closely does Trump fit the bill?  Cults blindly and mindlessly follow a charismatic leader. Donald Trump recognizes this element in his base with such sayings as  "I could stand In the middle Of Fifth Avenue and shoot somebody and I wouldn't lose any voters.” Indeed, such is the blind loyalty to Trump that he is probably right.  Cults worship their leader. Even if the leader says things like “John McCain isn’t a hero,” or trashes Gold Star families, his base applauds and follows their Pied Piper wherever he wants to take them.

The cult leader’s word is gold to his followers. And so, his base turns a blind eye in the face of thousands (yes, thousands) of lies he tells. Cults have their ritualistic chants. “Lock her Up, Lock her Up” and “build the Wall” are shouted at Trump rallies from coast to coast. Cult leaders claim to be on a “special mission” and as Trump says “Only I can do it.” Cults have insiders and the rest of the world is an outsider to be berated and hated.  Cult leaders are not accountable, and thus Trump says he will not release his tax returns as previous presidents have routinely done. Cults believe the ends justify the means, and thus the President bullies, demeans, and calls others ugly names which seems to the rest of us undignified and unpresidential, but to the Trump cult is fully justified (my mother would have washed my mouth out with soap if I had said such things).

Former cult members write scathing exposes of their terrible lives within the cult. After only 2 years in office, a spate of Trump administration tell-all books are coming out describing the horrors of working for such a monstrous boss. Cults have a persecution complex. How many times does Trump tweet out messages condemning Saturday Night Live for its impersonations of the President? How many times does Trump blame the press for his failings? Cults engage in group-think. Cults kowtow to the leader’s every whim. They show disdain for non-members. Cults are paranoid. How many tweets does one have to read to see that our President thinks the media, our allies, college professors, and authors are out to get him? Cults control the information members receive. And of course, President Trump calls the media “the enemy of the people,” not to be believed, and that his base should “not believe what you see and hear, believe me.”  Cults tolerate even celebrate the inappropriate and egregious behavior of their leader. And so, Trump is not to blame for the strippers, and Playboy models with whom he may have had relationships while still married. Boys will be boys, or demeaning references to women is just “locker room talk.”  I could go on.

What to do?  The Republicans gave us Trump, they should  now clean up their mess.  Someone must take him on in the primaries. Republicans need to return to their core values and principles and not be pet poodles for Donald Trump’s excesses. Our system works best when we have two strong parties that vie for power but can come together at times for the good of the nation. Caving in to the cult leader is not politics, it is party suicide. If the Republican Party is to survive into and beyond the next decade, it must wrestle from the Trump cult, control of the party. If not, it deserves to be electorally defeated and to collapse into the dust bin of history.

Donald Trump did not create the conditions that allowed for his rise. Global events, easily witnessed in the increasingly fractious politics of Europe, are challenging liberal democracies with a brand of illiberal democracy that threatens rule of law systems across the globe. Donald Trump is the American manifestations of this dangerous drift. He is riding a wave he did not create but has been masterful at exploiting. But just as the United States resisted the temptations of Communism and Fascism in the 1930s and 40s, and instead, committed to a rule of law system for our country, we need now to recommit to liberal democracy and the rule of law in our age.

Where will we be when this long national nightmare is over?  Will our democracy be stronger? Our society more just and equal? Our politics more civil and our language more compassionate? Will we move towards what our better angels would have us do, or will we follow the cult of leadership towards a politics of fear and division. Come home Republicans.  We need you.

Michael A. Genovese is President of the Global Policy Institute at Loyola Marymount University. The author of 50 books, he appears frequently as a political commentator on television and on radio.

This article was originally published at History News Network
Report typos and corrections to: feedback@alternet.org.
#story_page_post_article