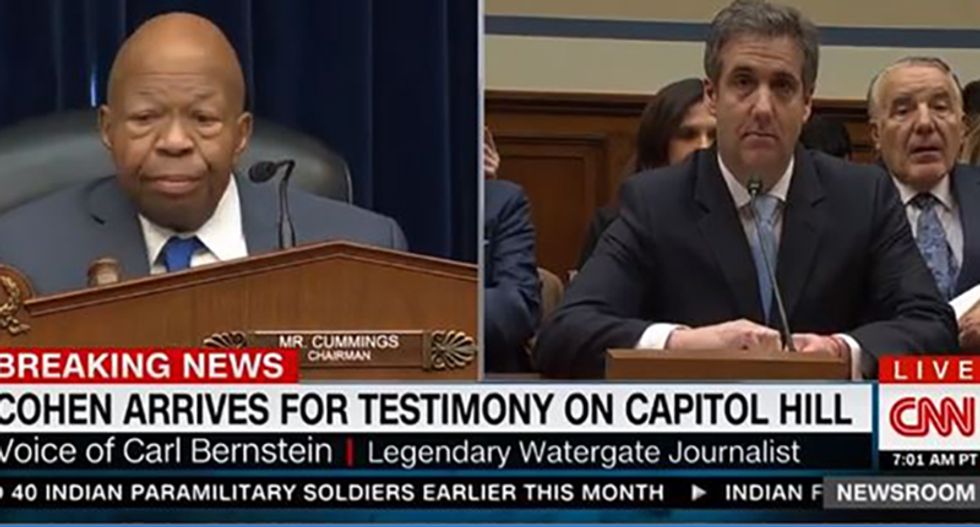 I had always been under the impression that Michael Cohen, Donald Trump's longtime "fixer," was a dope. Yes, he's a lawyer -- or at least he was until his disbarment earlier this week. But Cohen's law degree is from a school with a less than stellar reputation and after listening to the famous recording of him threatening a reporter I assumed he was merely another one of Trump's hired thugs. So I didn't expect him to be very effective when he appeared before the House Oversight Committee and assumed that he might lose his cool under what was sure to be overwrought questioning by the Republican members.

The GOP questioners did not disappoint but, surprisingly, Cohen was a poised and articulate witness, showing a grace under pressure I didn't expect. He calmly told the story of what it was like to work for Donald Trump in a way that reflected the hundreds of familiar White House tales that have been anonymously leaked to reporters about the president's behavior. Cohen's story, however, was a confession by an intimate acquaintance who has known the man for years. It carried much more weight, particularly since Cohen is bearing the full burden of crimes he helped Trump commit. It was inevitably going to be dramatic, but this exceeded expectations and validated my belief that the most important assistance Trump's accomplices in the last Congress gave him was not to hold any public hearings.

Cohen came to talk about specifics. He laid out a long list of unethical and possibly illegal behavior by the president, which I wrote about earlier this week, based upon his written statement submitted the night before his appearance. Cohen accused the president of committing campaign finance violations (even in the Oval Office), tax fraud, insurance fraud, bank fraud, perjury, obstruction of justice and self-dealing.

Cohen also testified that Trump knew specifics about the WikiLeaks dumps of hacked emails from the Hillary Clinton campaign and the Democratic Party ahead of time. (Roger Stone and Julian Assange have both denied this, not that either is a trustworthy source.) He indicated that he's working with federal prosecutors on several other investigations, some of which we may not yet know about. And with the help of the Democratic committee members, he laid out a roadmap for further investigation based upon his testimony and some of the documents he provided. He obviously cleared all of that ahead of time with both special counsel Robert Mueller and the Southern District of New York, which indicates that what he said is only the tip of the iceberg.

Republicans were not amused. Apparently, they too had decided that Cohen was high-strung and not very smart, so one or more of them hatched a scheme to rattle him on the night before he testified. Rep. Matt Gaetz, R-Fla., tweeted threateningly at Cohen, suggesting he might reveal evidence that the latter had cheated on his wife. Although Gaetz is not a member of the Oversight Committee, he reportedly begged for five minutes to "ask some questions." He was denied this opportunity so instead he just attended the hearing, presumably to put the heat on Cohen as he testified. On Thursday, it was revealed that he was doing all this on behalf of the Big Boss:

As Cohen explained in his testimony, Trump doesn't have to explicitly give orders. He just declares something and his minions know what they're expected to do. We don't know whether the information about Cohen's alleged girlfriends came from Trump or someone else, but Gaetz understood exactly what Trump wanted and was happy to do it for him.

Gaetz is a member of Trump's Praetorian Guard and is willing to do the real dirty work. The rest of the Republicans just followed a simple playbook in which they called Cohen a liar over and over again. Some of them foolishly asked him questions they didn't know the answers to, like Rep. Clay Higgins of Louisiana, who repeatedly accused Cohen of withholding the documents he was submitting to the committee from federal prosecutors -- despite being told that they had been returned to Cohen  by the federal prosecutors who had seized them during the raid on his office.  Their only defense of Trump was when Rep. Mark Meadows, R-N.C., chair of the House Freedom Caucus bizarrely trotted out one of the few African-Americans in Trump's inner circle to prove that the president cannot possibly be a racist.

The GOP's sole strategy was to attack Cohen's credibility and assassinate his character. As we know all too well, that is how Donald Trump operates, but in this case it was a big mistake. Michael Cohen didn't try to dodge the charges. He admitted to his crimes and repeatedly showed remorse. But he also defended Trump in some important ways by saying that he had no personal knowledge of any Russian collusion and that he had investigated many sordid accusations against Trump that he believed were untrue. Since Republicans had made Cohen's credibility the only theme of their questioning, they couldn't exactly turn around and accept those defenses. And they seemed to have no awareness that the man they were defending looks even worse than Cohen in this case. After all, Trump hired Cohen, knowing exactly what kind of guy he was, and worked closely with him for a decade.

None of those nuances seem to have occurred to Republicans on the committee. They were on a mission to destroy this threat to their president and nothing else mattered. As it turned out, the man they were taking on understood them far better than they understood themselves.

Early in his testimony, Cohen had described how he had been drawn to Trump in the beginning. He admitted that he knew what Trump was -- the character flaws, the corruption, the greed -- and that he was largely motivated by personal ambition. Yet he continued to work for him:

Sitting here today, it seems unbelievable that I was so mesmerized by Donald Trump that I was willing to do things for him that I knew were absolutely wrong.

Cohen then issued a memorable warning that should keep these Trump enablers up at night. He said, "I can only warn people that the more people that follow Mr. Trump as I did blindly are going to suffer the same consequences that I'm suffering."

Michael Cohen sounded, more than anything else, like a cult member who had been deprogrammed.

There is little evidence that the congressional Republicans saw themselves in him. They should have. While they may not end up in federal prison, as he soon will, they should at least be aware that Donald Trump is fully prepared to take them all down with him. Michael Cohen is their canary in the coal mine.