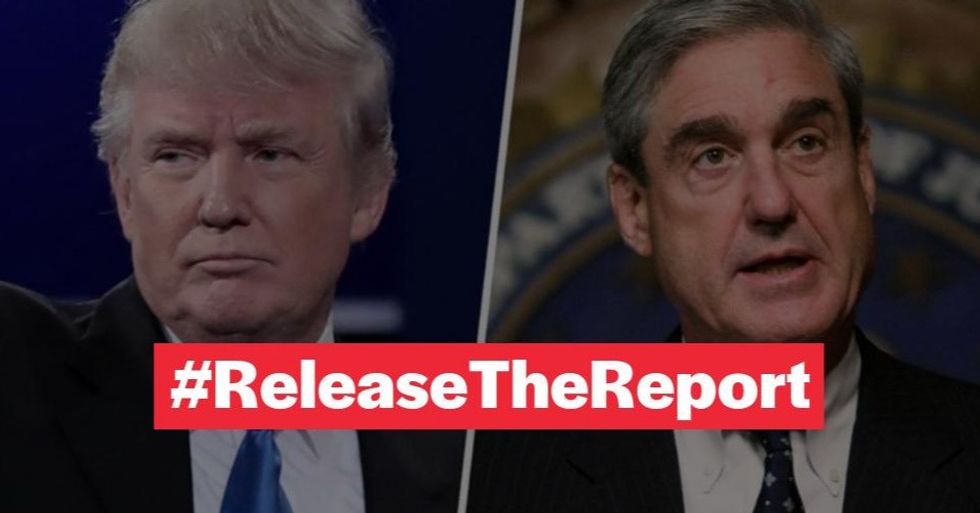 "Every American has a right to see the Mueller report," said the advocacy group Common Cause, "and therefore it must be released to the public." (Image: Common Cause)
Jon Queally
and
Common Dreams
March 24, 2019

Democratic lawmakers are demanding the full contents of the report submitted by Special Counsel Robert Mueller to the Department of Justice on Friday be released to the public and progressive groups are vowing massive protests if the DOJ or the Trump administration do anything to hinder its disclosure.

"It is absolutely critical that Attorney General William Barr makes special counsel Robert Mueller's report public in its entirety," declared MoveOn on Saturday as it urged people to sign a pledge for action. "There are over 500 events being planned if Barr covers up for Trump or if the Trump administration otherwise prevents the investigation from serving its public mission."

Following Mueller's submission of the report on Friday, Barr said he would review its contents and report back to key congressional lawmakers as early as this weekend.

In a joint statement, House Speaker Nancy Pelosi (D-Calif.) and Senate Minority Leader Charles E. Schumer (D-N.Y.) said the DOJ "must not give President Trump, his lawyers or his staff any 'sneak preview'" of the report and argued the administration should have no role in deciding what portions of the findings or underlying evidence should be made public.

"The American people have a right to the truth. The watchword is transparency," Pelosi and Schumer wrote.

Meanwhile, there's little indication at this point that either Barr or the White House will seek to conceal the report. Earlier this week, Trump—continuing to profess is innocence and repeating his "no collusion" mantra—said the report should be made public. "Let people see it," he told reporters on Wednesday.

Among her many tweets on the Mueller probe, journalist and national security analysis Marcy Wheeler (@emptywheel), who has followed the investigation closely, noted Friday evening that "Barr's willingness to issue quick public summary probably means it is not that damning towards Trump."

As noted by the New York Times and others, one of the key revelations is that Mueller has made clear to the DOJ that no further indictments are planned or should be expected from his office.

Those who professed deep skepticism of the media hysteria that has surrounded the probe over the last two year took the news that no further indictments were coming out of Mueller's office as a sign that the evidence for collusion or deeper crimes by Trump or his campaign (including the president's son Donald Trump Jr.) have long been overstated.

With the report in Barr's hands, as Vox explained, the timing and scope of the report's public disclosure is the next big fight:

The special counsel regulations require Mueller to write up his findings and submit them to the attorney general, which he did. And Barr notified Congress in a letter Friday that Mueller had concluded his investigation. But beyond that, he has a fair amount of discretion on what to share from the report both to Congress and to the public.

In his letter to Congress, which he made public, Barr told lawmakers that he remained "committed to as much transparency as possible," and would work to determine "what other information from the report can be released to Congress and the public consistent with the law."

With speculation rife (endless, in fact) over what the report does or does not contain and what will or will not happen next, the major resounding call among progressive voices on Saturday—given the seriousness of some of the allegations charged against the president and the amount of oxygen consumed by political pundits, legal analysts, cable news hosts, dubious conspiracy theorists, and earnest truth-seekers—was to simply make the full report (or as much of it as possible) available to the public as "swiftly" as possible.

While both the ACLU and the Leadership Conference on Civil and Human Rights, as Common Dreams reported, made that demand in the immediate wake of Friday's news, other organizations echoed that call overnight and into Saturday.

"Americans deserve to know the full truth about the Russian attacks on the 2016 presidential election," said Karen Hobert Flynn, president of the left-leaning advocacy group Common Cause. "The full report and underlying documentation from Special Counsel Robert Mueller must be released to the American people. Our tax dollars paid for the investigation and we are the victims of Russia’s sweeping efforts to aid the election of Donald Trump to the White House."

If the DOJ, the Trump administration, or members of Congress refuse to release the report publicly, Flynn added, "hundreds of thousands of Americans stand ready to take to the streets in cities and towns across the nation to demand the truth and to demand action by their elected officials."

As part of their effort to make sure the report sees the light of day, the ACLU launched a petition directed at the Justice Department.