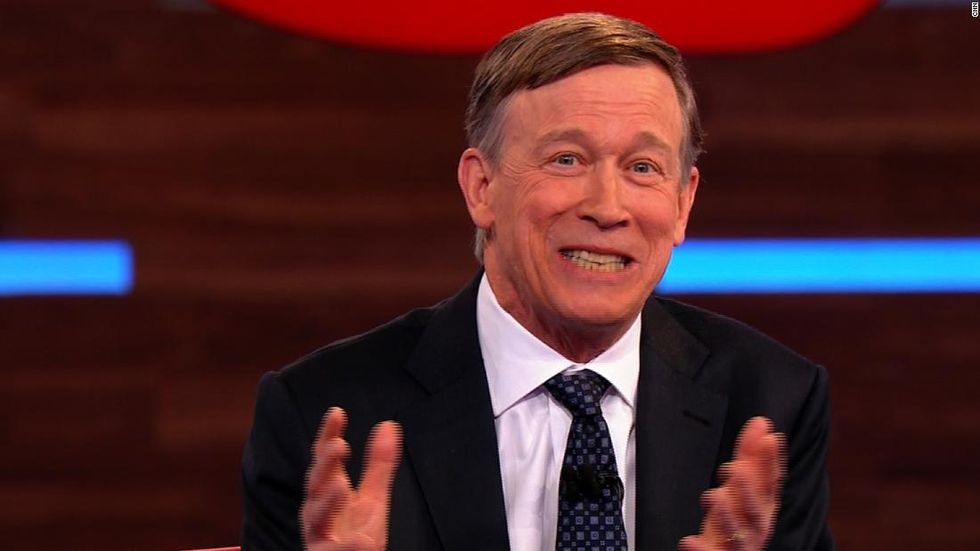 John Hickenlooper is not a flake. He just tends to play one when he’s on TV.

In the first big TV shot of his presidential campaign, playing the lead role in a CNN town hall, Hickenlooper surprised no one in Colorado when he upended a perfectly decent performance with an entirely unforced error. Hick is a well-known gaffe machine, but after two terms as Denver mayor and two as Colorado governor, we’re used to it. We call it quirkiness. Hickenlooper himself will admit to foot-in-mouth issues.

But the rest of America? That’s what this campaign is about after all. What did they think of Hickenlooper’s response to a question from Dana Bash on whether he would pick a woman as his running mate?

Here’s the clip. And here’s the transcript. And here we go.

“Of course,” he said, which would have been a reasonable place to stop.

“I’ll ask you another question,” he then said to Bash. “How come we’re not asking, more often, the women, ‘Would you be willing to put a man on the ticket?’ ”

The crowd was stunned. As one who has watched Hickenlooper closely for years, I thought it was just one of his lesser jokes. But it wasn’t only a joke, not when the issue for the post-middle-aged white guy is gender.

Hick told CNN reporter Dan Merica that he was trying to make the point that “too often media discounts the chance of a woman winning.”

“That is what I am talking about. People can take it out of context,” he said.

It’s a good point. And upon hearing it, I was pretty sure that’s what he meant to say. It would have been far better, though, if that had been what he actually did say, which was pretty much the opposite of what he meant. This wasn’t a matter of context so much as Hickenlooper fumbling the script. On Twitter, there have already been Hickenblooper sightings. The pundit class, which has been kind to Hickenlooper, may be less so. In other words, it wasn’t the town hall Hickenlooper was hoping for.

His spokesperson, Lauren Hitt, did her best to defend her boss, who has employed plenty of women in key positions during his time in politics, including his last lieutenant governor, Donna Lynne.

“I think most Americans understand what he meant,” Hitt began in Hick’s defense.

When I suggested that most Americans actually didn’t understand what he meant, she tried again: “Do we all wish that he had gotten the line out better? Of course.”

She pointed out that Hickenlooper has said that if you’re looking for the candidate who’s the best talker, he might not be your best choice. I think that’s a fair analysis. But she said that Hickenlooper would have many more chances to make his case, particularly to voters he meets in Iowa and New Hampshire. She says they’ll see the same candidate they saw at the town hall — someone, she argues, with good ideas and a strong record. Also someone, she added, “who is quirky and might need a few lessons in elocution.”

I think it’s a little late for lessons. And what people saw in the town hall was typical Hickenlooper. He struggled at times with getting his words in correct order. He had the oddly misplaced laugh. And we saw the first-ever presidential candidate asked to re-tell the story of the time as a college freshman he took his mom to see “Deep Throat.” It was actually a semi-endearing, if weird, story, but that and the vice-president quote would overwhelm everything else he said, including his stance against the death penalty.

And the problem for Hickenlooper is, this was not his first gaffe of the campaign. You may recall what happened when Joe Scarborough asked Hick if he thought of himself as a “proud capitalist.”  This was not anything like a tough question — or shouldn’t have been, even in the new era of Democratic neo-socialism or whatever you want to call it. This was a Hick layup. Hick made his mark as a brew pub entrepreneur who was there at the beginning of the mad success that is LoDo — the launch pad for his political career. Can you be an entrepreneur and not be a capitalist? (Hint: no.) Hick wouldn’t exactly say. He would say he rejected labels.

Days later, he came up with a better answer — that he’s not a capitalist in the way that Donald Trump defines the word. Come on, even Elizabeth Warren says she’s a proud capitalist.

So, where does the town hall performance leave Hickenlooper? I’m guessing just about where he was before the town hall. He didn’t do anything fatal to his campaign. But he didn’t help himself the way the other longshot candidate with a funny name — Pete Buttigieg — has done. This was a chance to move out of the 1 percent crowd. You only get so many chances at that. And the candidate who isn’t the best talker may not be the best bet to break out in the debates.

There’s also the Michael Bennet question. Is there enough room for two Colorado Democratic moderates — who both now reject the term “moderate” — in the race. Everyone expects Bennet to get in the race next month. I’ve been told that Bennet is around 90 percent certain to get in, but I’m thinking it’s closer to 99 percent at this point. And Hick’s struggle might help push him to 100 percent.

Bennet already has a pre-launch viral video — of his Senate floor takedown of Ted Cruz. It apparently set CSPAN records, which must make even Beto jealous. I doubt if Hickenlooper’s stumble will make it all the way to viral — however you actually measure that. But, in a crowded and unforgiving field, I think we can measure it this way: It has to be way too close.