Inside the sordid — and very creepy — world of 'Meth Tumblr' 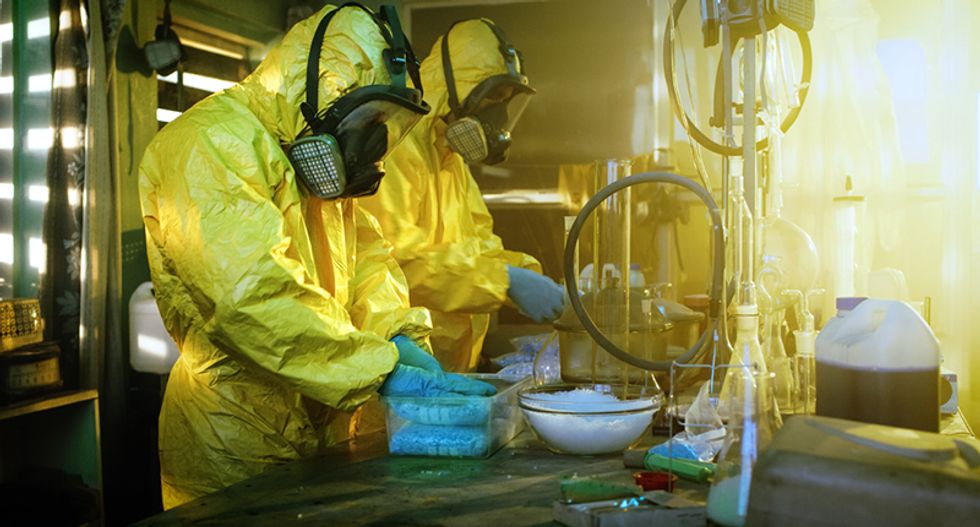 But search for “#spun,” and you’ll be greeted with hundreds of images and videos of tumblr users smoking, injecting, or generally celebrating methamphetamine use and addiction — sometimes half-naked.

“The king is still holding it down!” wrote one Tumblr user, posting a GIF of a rotating meth pipe with the hashtag "spun," a slang term for being high on meth.

Tumblr has long been a haven for bizarre subcultures, though many users may find Meth Tumblr particularly jarring: though in small doses methamphetamine has therapeutic uses — including for treating ADHD — the public consensus on meth is that it is a highly addictive and frequently physically destructive drug that, owing to its inexpensive and easy production, has wreaked havoc on rural communities across the United States. While there is probably such thing as responsible meth usage — researchers and policy advocates have written of how the cultural stigmas around meth have inhibited studies — certainly much of Meth Tumblr's content would not qualify as encouraging responsible or harm-reducing behavior.

Improbably, Meth Tumblr functions as as a celebratory safe space for a drug that is oft-reviled; even more improbably, it exists within the confines of a microblogging platform owned by a telecom giant that has been on a puritanical crusade against prurient content. Interestingly, Tumblr's social media platform peers do not have the same meth enthusiast subculture, at least not one that is as easily discovered.

Within Meth Tumblr's world of hashtags, many users' posts consist of images only: #TweakerGirls reveals numerous selfies of women blowing clouds of meth smoke. (Interestingly, the male equivalent, #TweakerGuys, had far less content.) The number of different meth-related hashtags and images hint at an entire community of tweakers who have found each other on Tumblr to talk about and celebrate meth use in all its various forms, from smoking to injecting to insufflating to even ingesting. “Anytime i find out someones never tried eating dope, i get so excited, like yo im [about to] change your life,” wrote one user, tagging their post with #TweakerNation. (In that post's comments, users debated the merits of ingesting meth.)

The preponderance of celebratory methamphetamine posts speaks to Tumblr’s latent hypocrisy when it comes to removing "adult content," under which (one would think) methamphetamine use would fall. The social media platform, which has been owned by telecom giant Verizon since 2017, announced in a 2018 blog post that they were banning all adult content from the site in order to create a “better, more positive Tumblr.” “We’re taking another step by no longer allowing adult content, including explicit sexual content and nudity (with some exceptions),” CEO Jeff D’Onofrio announced in a post. The company explained that it was relying on “automated tools to identify adult content and humans to help train and keep our systems in check.”

Such a puritanical moderation decision felt particularly incongruous in 2018, as nudity, drugs, and sex are no longer sources of moral outrage as they were in much of the twentieth and nineteenth centuries. Unlike the era of cable and broadcast TV, today's streaming sites bypass centralized censorship systems — enabling producers to depict sex, drug use and nudity on TV without fear of backlash or censorship.

Then, there was the passage in the U.S. of SESTA-FOSTA (“Stop Enabling Sex Traffickers Act" and "Allow States and Victims to Fight Online Sex Trafficking Act”, respectively) in spring 2018; while those bills were ostensibly designed to stop sex trafficking, pundits and policymakers are in widespread agreement that their passage resulted in an overcorrection that led numerous online platforms to outright ban sex-related content for fear of liability. As with Tumblr’s adult content ban, many sex workers lost work as a result, or in many cases found their work become much more dangerous as a result of losing their ability to digitally screen potential Johns.