Hightower: Corporations are playing with our food - and with our heads 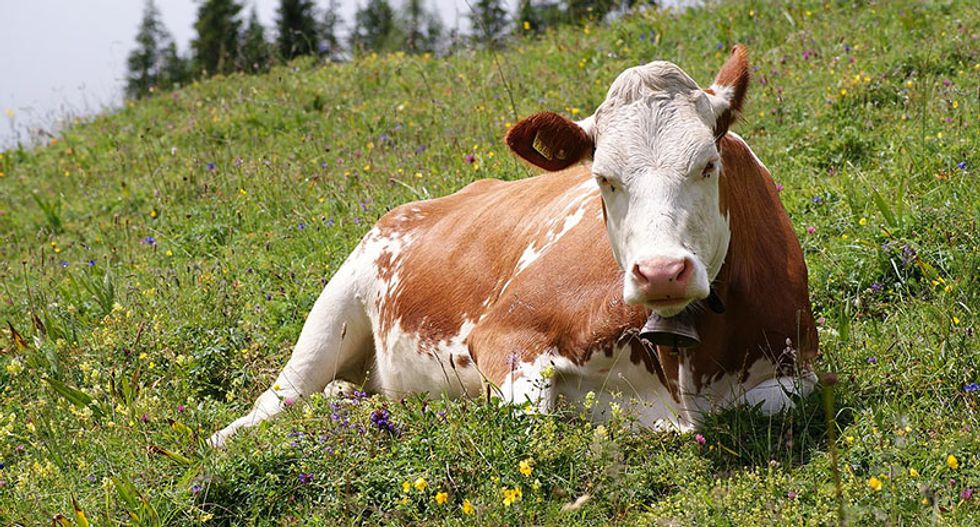 From kitchen tables worldwide, you can hear a chorus of parents chastising their children with the same refrain: "Stop playing with your food."

Children aside, this rebuke needs to be loudly directed at the food fabricators of industrial agriculture. Corporate interests keep toying with the very nature of food -- not to benefit consumers, family farmers, workers or the environment, but to fatten the profits of Silicon Valley tech giants, food monopolists and Wall Street financiers.

Meet Recombinetics, a high-tech gene manipulation corporation with bioengineers in its labs remaking farm animals -- pigs, for example. Recombinetics wants to mess with the very DNA of Mother Nature's oinkers to make them produce bigger litters to supply the pork factories of brand-name marketers. It is also genetically altering milk cows to withstand hotter weather so that climate change won't reduce the output of huge dairy corporations.

This re-engineering of nature to build industrial Frankenanimals is being supported by such land-grant colleges as the University of California, Davis -- your tax dollars at work! Of course, this corporate-government collusion faces a high hurdle in the marketplace, for consumers have demonstrated again and again that they don't want the food they put on their tables tampered with by profiteering geneticists. The tamperers, though, have a solution to that problem: secrecy. The industry is lobbying lawmakers and regulators to outlaw any requirement that milk and meat produced by genetically altered animals be labeled as such. Better to keep consumers in the dark because... well, if given a free choice, people might reject Recombinetics in favor of natural food.

Rather than remake animals and remake the marketplace to benefit corporations that play with our food, let's remake the corporate system that is trying to industrialize dinner. Corporate manipulators are not out to make food better or more affordable for us, but strictly to make it more profitable for them.

How're you gonna keep 'em down on the farm after they've seen ... Angus?

Not Angus the breed of cattle, and not the time-honored given name of many farm boys, but Angus the 1,000-pound "farmer of the future." He's actually not a he, but an it: a robot, toiling away on a hydroponic "farm" that is indoors, soilless and, yes, soulless. Angus is owned and programmed by a multimillion-dollar Silicon Valley startup named Iron Ox, and its homestead is hardly bucolic. It's in an 8,000-square-foot concrete warehouse in a suburb south of San Francisco.

This farm bot is more of a heavy lifter than a heavy thinker. Basically, Angus wheels around the warehouse to lift, move and hand off large pallets of basil, bok choy and other produce to another robot that, so far, hasn't earned a name. The human overseers of this robotic animal farm don't wear John Deere "gimme caps," but clean-room hairnets, apparently to prevent anything organic from contaminating the edibles or the robot.

Started by a Google engineer, Iron Ox hopes to install duplicates of its faux farm in metropolitan areas across the country. The obvious question is, Why? Well, for the greater good, claims the Googlite owner. "If we can feed people using robots, what could be more impactful than that?" Well, reconnecting our food system to nature, a democratic economy and human beings. The roboticists brag that local warehouses can provide fresher lettuce than what megafarms ship from thousands of miles away. But wait! Local farmers markets do that, do it even fresher and keep the consumer dollars in the community rather than siphoned off to Iron Ox and the Wall Street financiers of Angus robots.

In fact, the robotic indoor farm hucksters quietly concede that their real business plan depends on "sidestepping" the cost of human labor and local farm owners. Instead of spreading wealth to people and communities, their scheme concentrates food profits in a handful of absentee syndicators, rich investors and technology giants.

Deep in his digital brain, even Angus must know this is stupid.