Here's what the US can learn from India's constitution 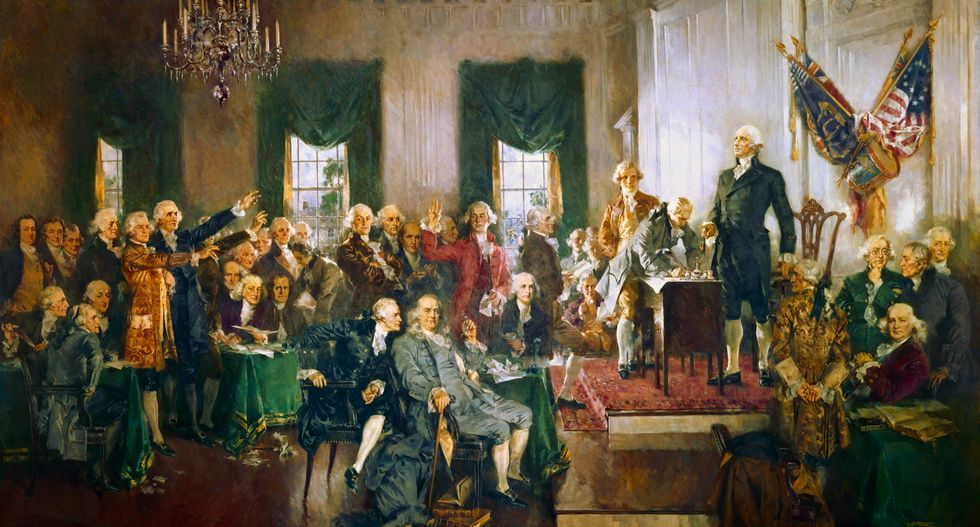 The United States and India, two of the world’s largest and oldest democracies, are both governed on the basis of written constitutions. One of the inspirations for the Constitution of India, drafted between 1947 and 1950, was the US Constitution. Both Indians and Americans revere their ‘constitutional rights’ – especially the ‘fundamental right’ of free speech, and the separation of state and religion. Both countries support critical traditions that focus on particular clauses of the constitution. In India, Article 356, which allows for the suspension of state legislative assemblies to permit ‘direct rule by the centre’, has provoked considerable critique, while in the US, the Second Amendment is a source of perpetual political and legal discord. The Indian and US supreme courts both enjoy the power of judicial review, to declare acts of other branches of government illegitimate, and so a measure of ‘supremacy’ over their respective legislative branches. For this reason, both constitutions are ‘undemocratic’ in their arrogation of too much political power to the judicial bench – a group of unelected public servants.

The US and Indian constitutions diverge in their ‘stability’ or ‘flexibility’. The US Constitution is very difficult to change and, thanks to a religious American sensibility that treats it as a sacral document, it has simply not evolved, impervious to the changing needs of a growing and progressing nation and world. The Constitution of India suffers from the converse flaw; in less than 75 years, it has been amended, at last count, 103 times. This kind of recipe for political instability is precisely the worry cited by those who resist attempts to make it easier to amend the US Constitution.

How flexible should constitutions be? How often, and how, should they change? Is a written constitution – unlike the unwritten British one – an invitation to the political polarities of instability or stasis? There is no simple answer to these questions. But history offers some guidance. Law, when it emerged in the great ancient Mesopotamian civilisations, was a ‘tool of government’. Such a demystified, pragmatic view of law suggests legal constitutions are technologies for governing, designed and implemented to bring about socially negotiated outcomes. Depending on the histories and needs of their ‘parent societies’, different kinds of constitutions come about, generating histories of political, legal and economic evolution, and being altered by them in turn. The histories of the US and Indian constitutions show two related political and legal systems evolving over time, their variations underwritten by their country’s historical experiences. The history of the Indian state and constitution includes a pragmatic American influence, with which the US would now benefit being reacquainted.

In 1947, Justice Felix Frankfurter wrote to a member of India’s drafting committee, Sir Benegal Narsing Rau, advising him to delete references to ‘the due process of law’ from the working draft of the Constitution of India. Justice Frankfurter’s logic was simple. In the so-called ‘Lochner era’ (1897-1937), the US Supreme Court, by utilising its power of judicial review, had often struck down social welfare legislation enacted by a busy US legislature. The legislature’s social welfare programmes were responses to the needs of an economically desperate polity; the court answered by reasserting the needs of the ‘business class’ and the ‘haves’. Such antidemocratic inclinations were arrested only by the ‘switch in time that saved nine’. That was how Thomas Reed Powell of the Harvard Law School characterised the US Supreme Court’s reversal of its rulings in this domain in the face of President Franklin Roosevelt’s threat to place additional judges more sympathetic to his legislative initiatives on the Supreme Court. Politics, in other words, compelled a historic constitutional transformation.

In 1947, as India looked ahead to its nascent republic status, its new Constituent Assembly planned extensive land reforms. These reforms sought to reduce the entrenched power of India’s landlords and bring relief to their serfs in India’s provinces; they would, at a minimum, involve some ‘seizures’ or ‘takings’ of landed property. An Indian landlord equipped with a copy of the American due process clause might expect to find the new Indian Supreme Court willing to stand by him and, as the US Supreme Court first tried to do with the New Deal, thwart the democratic reforms of the legislature. Such judicial intervention, likely in the name of ‘due process’, would threaten India’s post-independence progress toward the eventual realisation of a republic that ensured the wellbeing of all its citizens. The drafters of the Indian constitution paid heed to Frankfurter’s advice.

The first version of the due process clause in the Constitution of India had read: ‘Nor shall any State deprive any person of life, liberty and property without due process of law.’ Soon, the word ‘property’ was deleted. Moreover, to prevent the broad interpretation of ‘liberty’ that the US Supreme Court had shown in Lochner v New York, when it had struck down minimum-wage legislation, ‘liberty’ was qualified as ‘personal liberty’ – not corporate. Lastly, to minimise the expressive impact of ‘due process of law’, that phrase was replaced by ‘procedure established by law’. Finally, Article 21 of the Constitution of India read: ‘No person shall be deprived of his life or personal liberty except according to procedure established by law.’ India’s land reforms went through – partially – helping a newly independent democracy, the world’s largest, move beyond feudalism.

The US can learn something from this little history lesson. Every constitution offers a particular set of solutions to a social, economic and cultural context. India did not copy the US Constitution; it took what worked for it and no more. Moreover, if constitutions are tools for governance, then they simply must change over time, through trial and error. Constitutions should be changed as often as their subjects want to change them, to bring about the results they want for their political community. One of the drafters of the US Constitution, Thomas Jefferson, suggested that every generation of Americans should draft its own version to meet the particularities of its time. Jefferson calculated, using actuarial tables, how often this should be: 19 years. Americans pride themselves on their pragmatic and innovative nature; that self-image should suggest that the all-American thing to do is to desacralise the US Constitution, remove it from the pulpit, and put it in its place, a toolbox of governance, there to be used and modified to – as the US framers of the constitution put it – ‘make a more perfect union’.