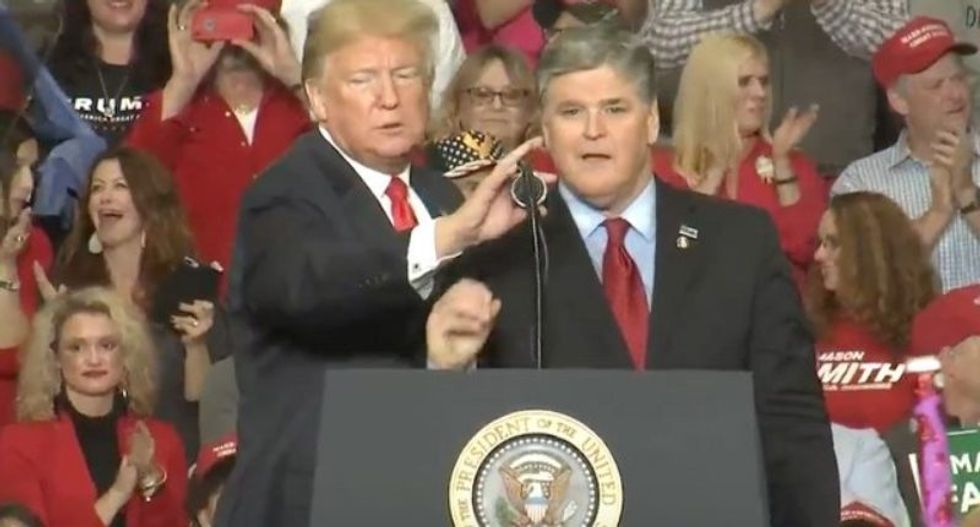 On Monday, The New Yorker published Jane Mayer's stunning exposé into how Fox News, always a right-wing network, has morphed into an overt propaganda instrument of President Donald Trump's White House, and how the symbiotic relationship between the president and Fox's billionaire international news mogul owner Rupert Murdoch has effectively created something that has never before existed in American politics.

To some degree, the article covers ground that has long been known or suspected — the way that Trump's policy decisions on everything from the federal government shutdown to the transgender military ban are informed by his daily binge-watching of Fox talk shows; how former Fox executive Bill Shine has blurred the Fox and White House payrolls since being hired as Trump's Deputy Chief of Staff; and how Fox itself has discarded the few journalistic guardrails it had during President Barack Obama's years, with hosts like Sean Hannity and Lou Dobbs now free to openly join political rallies and offer advice to the president.

But there are some new, mind-blowing revelations in Mayer's article. Here are five of the most significant:

Trump is well known for assigning numbers to women based on how attractive he thinks they are. But according to Mayer's reporting, he does the same thing for reporters based on how loyal he thinks they are to him. "Bret Baier, Fox News’ chief political anchor, is a 6; Hannity a solid 10. Steve Doocy, the co-host of 'Fox & Friends,' is so adoring that Trump gives him a 12."

Needless to say, this is a dangerous development. Trump has a track record of rewarding and punishing reporters based on his whims. During the presidential transition, he reserved a seat at a press conference for a Breitbart reporter. And last year, Trump suspended the press pass of CNN's Jim Acosta after he challenged the president's claims on special counsel Robert Mueller and the Honduran migrant caravan. He later relented after one of his own judicial appointees ordered him to restore Acosta's credentials.

Despite having essentially no qualifications for any of it, Trump's son-in-law Jared Kushner has worn numerous hats in the administration, from meeting with foreign heads of state to working on the Middle East peace plan to fixing the opioid epidemic — and Trump trusts him enough to have overridden intelligence officials to give him a top-secret security clearance.

One other person who trusts him, according to Mayer's article, is Murdoch. In fact, Kushner may be Murdoch's most direct liaison with the Trump administration.

Sources told The New Yorker that Kushner routinely asks Murdoch for advice, has "assured Murdoch that the White House is a smooth-running operation, despite many reports suggesting that it is chaotic," and that the two of them communicate "Like, every day." Given that the White House has given Kushner such a massive portfolio of responsibility and trust, Murdoch's relationship with Kushner is likely one of the biggest influences he has on the executive branch.

During the presidential election, it was reported that former Fox News host Megyn Kelly — who famously tried to question Trump on his treatment of women at the GOP debates only to have Trump dismiss her as on her period — asserted that Trump had help with the debate questions ahead of time. She later denied saying or believing this — but Mayer's reporting now backs up this idea:

A pair of Fox insiders and a source close to Trump believe that Ailes informed the Trump campaign about Kelly's question. Two of those sources say that they know of the tipoff from a purported eyewitness. In addition, a former Trump campaign aide says that a Fox contact gave him advance notice of a different debate question, which asked the candidates whether they would support the Republican nominee, regardless of who won.

It is hard to know whether this claim is accurate, as Ailes is deceased and contemporary reporting suggested that Fox was not yet in Trump's orbit at that point of the Republican cycle. But if true, this would be highly damning — especially considering Trump asserted that the incident where former Democratic National Committee Chief Donna Brazile gave Hillary Clinton CNN questions ahead of time proved the network was "a total fake."

But all of it could have come out much sooner — because as Mayer reports, Fox News had the story during the 2016 presidential election, killed it, and may have retaliated against Diana Falzone, the reporter who uncovered it:

Falzone had worked on the story since March, and by October she had confirmed it with Daniels through her manager at the time, Gina Rodriguez, and with Daniels's former husband, Mike Moz, who described multiple calls from Trump. Falzone had also amassed e-mails between Daniels's attorney and Trump's lawyer Michael Cohen, detailing a proposed cash settlement, accompanied by a nondisclosure agreement. Falzone had even seen the contract.

But Falzone's story didn't run—it kept being passed off from one editor to the next. After getting one noncommittal answer after another from her editors, Falzone at last heard from LaCorte, who was then the head of FoxNews.com. Falzone told colleagues that LaCorte said to her, "Good reporting, kiddo. But Rupert wants Donald Trump to win. So just let it go." LaCorte denies telling Falzone this, but one of Falzone's colleagues confirms having heard her account at the time.

According to The New Yorker, Fox then proceeded to demote Falzone, without explaining why. She later sued Fox, which settled the case and made her sign a nondisclosure agreement that prohibits her from discussing the details of her employment.

The Justice Department's opposition to the AT&T-Time Warner merger, which is cleared to go through after federal courts demolished the antitrust lawsuit, has always seemed legally suspicious — indeed, one of the reasons judges rejected it is that AT&T put forward compelling evidence that Trump personally wanted to kill the deal to harm CNN.

According to Mayer's reporting, that's exactly what was going on. Trump ordered his then-economic adviser Gary Cohn to pressure the Justice Department to block the merger — something Cohn refused to do, but which the department eventually followed through with. Trump showed no such anti-corporate sentiment with Disney's acquisition of 21st Century Fox, a deal of similar scope but which would benefit Murdoch financially.

This development also puts the Federal Communications Commission's unexpected decision last year to kill the Sinclair Broadcast Group's merger with Tribune Media, which was arguably good for the local news market, in a more sinister light: that merger could have strengthened Fox's biggest competitor in conservative television broadcasting.

Antitrust law is a powerful pro-consumer tool when applied fairly and equitably, but in the hands of someone like Trump, it can also be used to chill freedom of the press by rewarding and punishing news organizations.