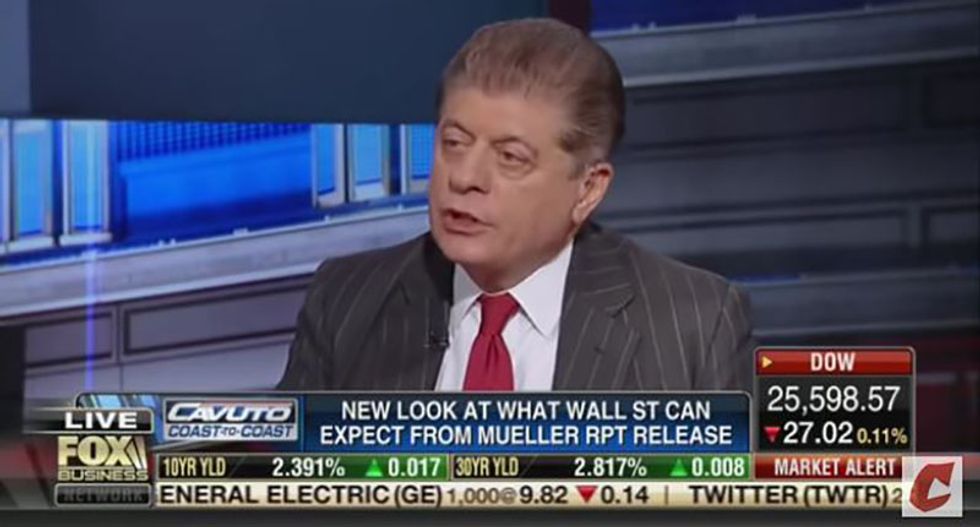 The Republicans in Congress have going absolutely batty over what they regard is the total exoneration of Donald Trump by the Mueller Report - which none of them have seen a single page of. They are even escalating their attacks on Trump's Democratic critics to include absurd demands for apologies and the resignation of House Intelligence Committee Chair, Adam Schiff.

So you have to wonder how Trump and his MAGA Martinets will respond when they hear that the senior legal analyst at fox News agrees with Rep. Schiff. In a conversation with host Neil Cavuto (video below), Andrew Napolitano presented the bare legal facts that demonstrate Trump's complicity in conspiratorial endeavors with Russia and efforts to cover them up. Napolitano noted that special counsel Robert Mueller "must have found some evidence of a conspiracy," and that "there obviously is evidence of obstruction of justice." He elaborated on those points during the interview:

That just happens to be precisely the case that Schiff has been making for months. He told CNN that:

"There was a big difference between whether there was evidence of collusion - and I think that evidence is in plain sight - and whether you can establish proof beyond a reasonable doubt of a criminal conspiracy."

So all the hoopla by the right and the devoted cult followers of Trump is, as usual, just the yammering of ignorant partisans who are more interested in feeding their fantasies than in accepting reality. And the reality is that there is abundant evidence of criminality by Trump and his associates. Whether a prosecutor could obtain a conviction by the standards that apply in a courtroom is irrelevant to the discussion of whether the President's activities were immoral, unethical, or proof of his unfitness for office.

The key point here is whether there is sufficient cause to proceed with efforts to release the Mueller Report in full and complete the investigation into Trump and Russia's documented interference with the 2016 presidential election. Some of Schiff's colleagues in Congress expressed their rage that anyone would continue to doubt that the President was vindicated. But Schiff masterfully put them in their place with an emotional and fact-filled response to their personal disparagement of him. "You may think it's OK," Schiff said, "how Trump and his associates interacted with Russians during the campaign. I don’t."

And the America people don't think it's OK either. Which is why Schiff and the Democrats in Congress need to continue their efforts to bring light to the nefarious affairs of Trump et al, by demanding the release of the full Mueller Report and issuing subpoenas, if necessary, for Mueller and Attorney General Barr. The nation deserves to know, as another unscrupulous president once said, whether or not their president is a crook. Because if we don't stop him now, he'll just do it again (which he probably already is).