‘Completely in over her head’: Ex-Trump legal spokesman reveals how Hope Hicks yelled at him and helped light the fuse for Mueller’s probe 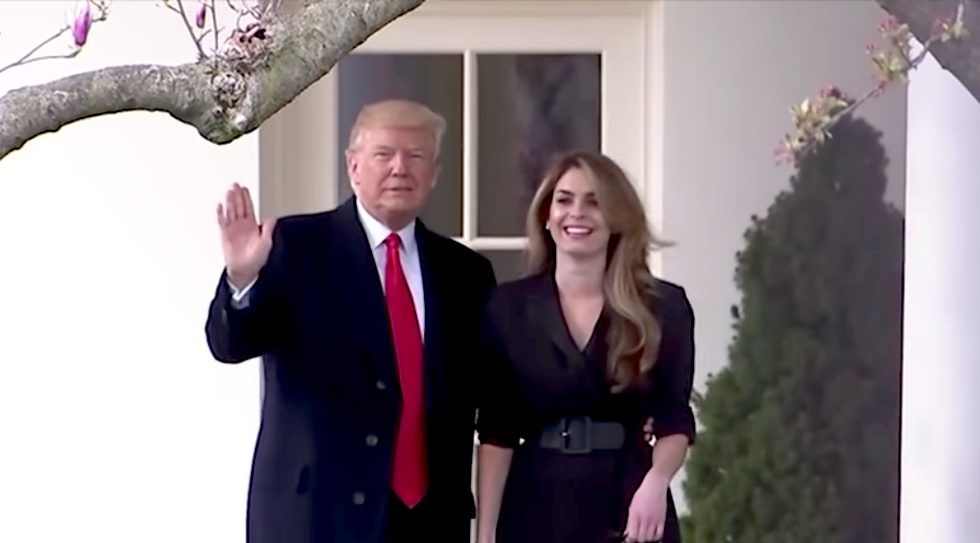 In a new interview with the ABC News podcast "The Investigation," Mark Corallo, a former spokesperson for President Donald Trump's legal team, was deeply critical of the role Hope Hicks played in key events in the special counsel's investigation.

Hicks, who served as Trump's communications director before leaving the White House, was on Air Force One with the president when he issued a statement about his campaign meeting at Trump Tower with a Russian emissary promising to bring "dirt" on Hillary Clinton the summer before the 2016 election. In that statement, Trump had omitted the fact that the Russians had offered any help with the campaign — a key revelation as Special Robert Mueller's investigation into the Kremlin's election interference was ongoing.

Corallo noted that the statement Trump put out was inaccurate and that regardless, Hicks should not have been involved in putting out the statement at all.

"And then my phone rings and it's Hope Hicks," Corallo explained. "So, she just started laying into me. And, then she admitted that yes, they had crafted this statement on Air Force One and that they'd handled it. You know, she said, I had the New York Times handled and I'm going — you did? You work in the White House. This is a private matter. This is not the president's conduct of his office. This is matters to do with him as a private citizen, really, not even him. This has to do with his son, son in law, and former campaign director. So, so I just I listened to her yell and then I said well you know you've probably made yourself a witness in a federal criminal investigation."

But it got worse after that, because Hicks called back and put Corallo on with the president, he said.

"I said, 'Mr. President please talk to your lawyers about this. Don't talk to me about this. Talk to your lawyers,'" he continued. "You know, I was very aware that there were no lawyers on that conversation, on the phone. A bedrock principle of our legal system is the attorney-client privilege. And I was just very aware that without an attorney on the phone, there was no privilege not to mention the fact, that there was no executive privilege because I don't work for the White House."

Corallo added: "They are creating risk unnecessarily. The idea that a 20-something press aide would put the president of the United States on the phone to talk about a federal criminal investigation, without his attorneys on the phone, to protect the privilege and that the president wasn't aware of it was just astounding to me. And terrifying."

At one point, he said, he told Hicks that there were documents that contradicted the statement they put out.

"Well, nobody's ever going to see those documents," he recounts her telling him.

He said the comment made his "throat dry up immediately."

"Like what does that mean that no one's ever going to see them?" he said. "What are you gonna destroy them? She showed a complete lack of understanding of the situation and was completely in over her head."

He argued that these concerns weren't really from a criminal perspective — the bigger worry was about Trump's potential impeachment. Earlier in the interview, he said he was confident in Mueller's work, which has concluded, and it does not appear that any charges more will arise directly from the probe. However, Mueller did not come to a conclusion about whether the president obstructed justice, and he may intend to lay out the case and leave it up to Congress whether it meets the standard for impeachment.

Curiously, Corallo even seems to suggest that Hicks lied to the special counsel, explaining that he discussed the event with Mueller's team.

"They wanted to know, and they asked me, and they said well you know Miss Hicks says that that didn't happen," he said. "And they asked me how sure I was, and I said 100 percent. You know, I mean look — this was, you know, again I've used the word reckless over and over again. It was reckless."

It's not clear if the special counsel's team was really claiming Hicks lied to them, which would be a crime. It's possible they were referring to other statements she made publicly, or they even could have made up the claim to test Corallo's own story. Or perhaps they believe she lied, but they would be unable to prove it in court.

ABC News reporter Chris Vlasto noted that the Trump Tower incident and the Trump team's botched response to its revelation were some of the key factors that led to the Meuller investigation ramping up.

"That was the fuse," Vlasto said.