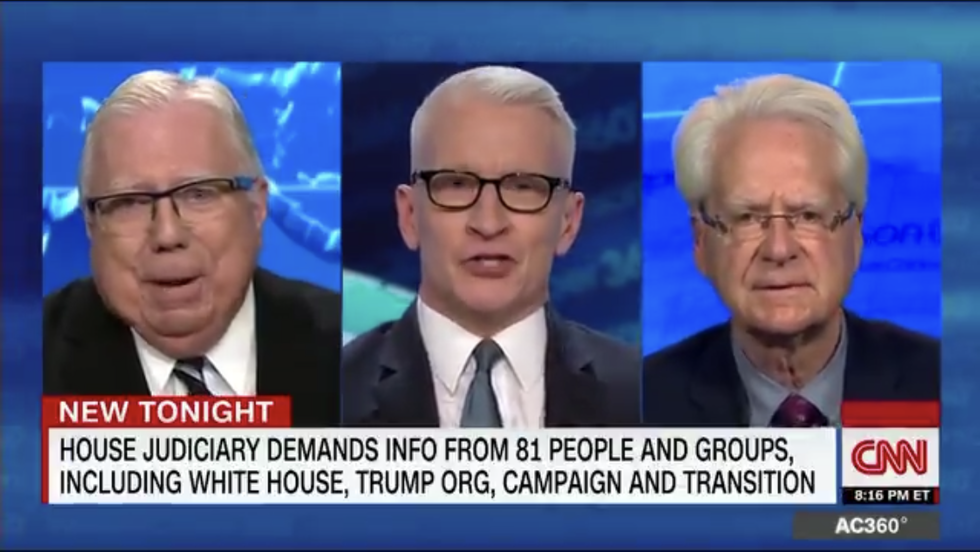 As President Donald Trump's former campaign adviser Roger Stone faces prison for obstruction and witness tampering to cover up his facilitation of the Trump campaign's use of Russia-linked email thefts from Democrats posted on WikiLeaks, one other person in Trump's orbit who could be in trouble is Jerome Corsi, an InfoWars writer and associate of Stone's.

Corsi initially rejected a plea deal from special counsel Robert Mueller and hired far-right lawyer Larry Klayman, an antigovernment conspiracy theorist who once tried to make a citizen's arrest of President Barack Obama, to help him accuse Mueller of blackmail. He has since turned on Roger Stone, but he is not off the hook — in particular, he helped push the conspiracy theory that murdered Democratic staffer Seth Rich was behind the WikiLeaks dump, even as Stone helped Trump coordinate with them.

On Monday, CNN's Anderson Cooper invited Corsi and Klayman on air to discuss the matter — but the interview was derailed when Cooper mentioned the conspiracy theory they are most famous for pushing over the years: that Obama's birth certificate was a forgery.

"You're saying forensic analyst by people linked with Joe Arpaio," said Cooper, referring to the disgraced former Maricopa County sheriff. "Is that the forensic analysis you're talking about?"

"So you don't believe that President Obama was born in the United States?"

"That's not what I said," insisted Klayman. "I said the birth certificate, there's forensic analysis that it's fraudulent. Don't beat up on my client because of that. It's inappropriate. Do some research."

"I said, and Larry's right on this, I want to see the original 1961 birth records from Kenya," cut in Corsi.

Cooper then noted that Corsi had to retract his story on Seth Rich and said, "Why should anyone believe you?" At which point Klayman snapped, "There's nothing wrong with his record on the Obama birth certificate, Anderson. Don't twist things." Shortly after, Cooper uncomfortably shut down the interview.

“When I’m wrong I’ll admit it. ... In deference to the Seth Rich family, I retracted one article.” Conspiracy theorist Jerome Corsi explains why he’s retracting a false story, adding that he still believes the theft of DNC emails was “likely an inside job” https://t.co/jZEP6ZFcS0 pic.twitter.com/ArvzCCn8xB

The "Birther" conspiracy theory was a popular way to claim that the first black president was not really one of us. Trump, who was one of its biggest promoters, took the racism a step further by suggesting Obama's grandparents planted fake birth announcements so they could fraudulently get welfare benefits — but even he has since admitted, in his typical admit-no-fault manner, that Obama was in fact born in the United States.

Corsi appears to be one of the few remaining public figures still sticking to his guns on the issue. And Cooper was having none of it.