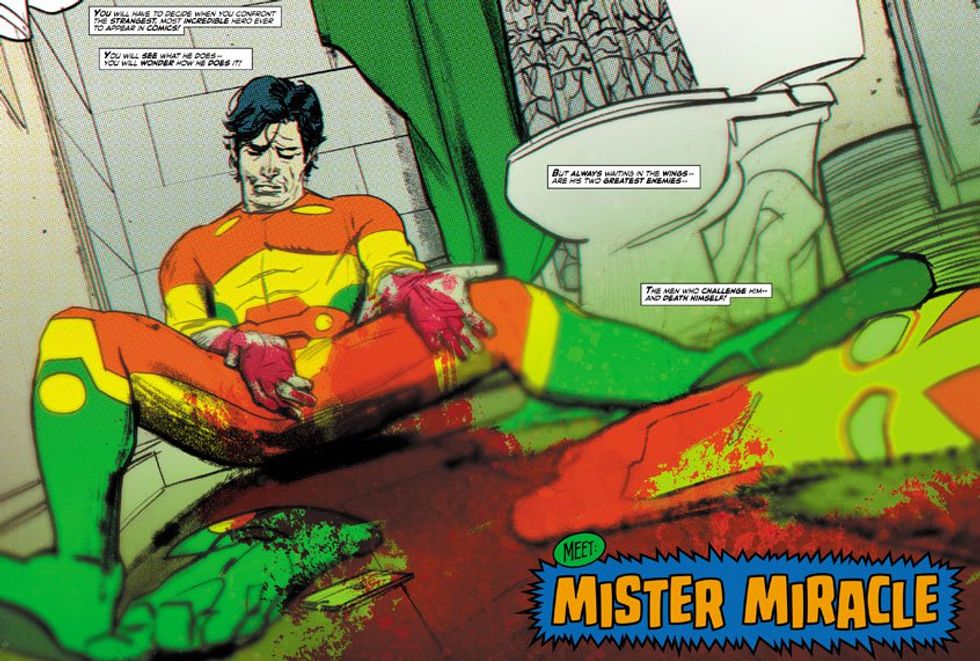 Tom King has lived an interesting life. In the years after 9/11 he served in Iraq and Afghanistan as a CIA officer tasked with disrupting terrorist networks. Since then he has moved into quite a different realm, writing such iconic characters as Batman and Mister Miracle for DC Comics. King's other work includes such graphic novels and comic books as "The Sheriff of Babylon," "Heroes in Crisis" and "The Vision."

In 2018 Tom King's work on such titles as "Batman" and "Mister Miracle" earned him an Eisner Award for best writer. King was also nominated for a Hugo Award for "The Vision" in 2017.

How is King managing this success? In what ways did the anxiety, frustration, and existential angst that is the Age of Trump inspire his graphic novel "Mister Miracle"? What are the challenges in writing such a beloved and well-known character as Batman? How does King balance his private thoughts and emotions with what he decides to share with the public through his writing? Should comic books and graphic novels be considered "literature"?

Our conversation has been edited for clarity and length.

How do you feel right now, with all the acclaim that "Mister Miracle" is receiving? Have you had time to reflect on it all?

It feels like I have a deadline on Friday. There's always another book coming out. I've got three kids and six books to write. There is no time to reflect.

You certainly have lived an interesting life, from working as a CIA officer in Iraq and Afghanistan to becoming a successful comic book writer. How did this all happen?

I've lived a weird life. After 9/11 I wanted to be one of the people who helps out. And then eight years later, I'm sitting there and I am one of the guys who is helping out. I said to myself, "how did this happen?" When I quit the CIA, I knew I wanted to tell a good story. Six years later I'm telling a good story. I feel like I am the luckiest man in the world. From the outside it seems that I have lived an interesting life as they say. But for me, most of my life involves taking care of my kids, my wife and my dog. It all feels very normal to me. I have changed more diapers than I've written novels.

Is all art autobiographical?

Writing is so bizarre. I'm sure it's different for every single person. For me, when I first started trying to write I was in my early 20s. I started writing vaguely, but I was obviously the main character. It was terrible. I realized my thoughts were incredibly boring to me because I was thinking them all the time. It was a repeating record. So putting it down on paper seemed very boring to me.

I started to be an interesting writer when I got away from my own thoughts. I started writing characters who weren't me. Eventually you start to realize that as far away as you got from yourself, you were just writing about yourself the whole time. You were just disguising it. It doesn't matter what I write, I try as hard as I can to get away from myself and then it ends up being about something inside me all along.

But that's why I write. No matter how much you philosophize about it, you won't get at the truth. And the only way to get there is through literature, poetry, music or other types of art that go beyond the language we use to balance ourselves in this reality.

So when you're writing, you're trying to create something that you can't just express and get that out through a story. Eventually you try to make a connection between yourself and someone reading your work.

What type of art do you think will be produced by Donald Trump's presidency and this moment of trouble and tumult? How do we write something that's transcendent in such horrible times?

I live in the Capitol Hill neighborhood. I walk my dog around the Capitol everyday. Trump's inauguration was taking place and there were a bunch of porta-potties. The company that owned them was named "Don's Johns."  I'm walking my dog by these toilets and someone had come by and crossed out the "Don's."

Apparently Trump had decided he did not want the bathrooms called "Don's Johns." It's was the literal censorship of a porta-potty. I'm walking around this inauguration and I was thinking to myself, how are we going to write about this time? How are we going to make art about this absurdity we're running into? And not just absurdity, but dangerous absurdity? This moment with Trump is like "Waiting for Godot" with guns.

There are two ways to do that. I think the first would be just to be open about it. To write about all the politics of this moment and the stupidity of it all. But somehow that just comes across as too obvious.

The second thought is just to write about the anxiety of this Trump moment. It seems like everyone is a little crazy, everyone's a little on edge. Watching how Twitter and your family has transformed and there is so much anger in the air and so much tension in all of us now. That is what I wanted to write about with "Mister Miracle."

I have a platform, I have illustrator Mitch Gerads, and the two of us can get together and write a story about this time. Not about the politics but about this fucking crazy moment.

Where did your "Mister Miracle" come from? Was it an epiphany or instead an idea and a story that you had been thinking about for some time?

I had one of those nervous breakdowns, like in the TV show "The Sopranos," where you end up in the hospital and you ask the doctor if you were dying or crazy and you hope he says "crazy." For me it was the crazy, thank God, but then you still have to live with that forever as your life. I wanted to put that into Mister Miracle. He is the perfect character for it. I had already been assigned him. Here's the guy who's always trying to escape but can't. That's exactly what it feels like. That's what it feels like to have a panic attack. I had to run away but I can't run away.

How do we as a country and a people -- and as individuals -- escape Trump and his allies' assault on reality?

Mister Miracle is about him being stuck in this horrible reality and can he get out of it or not? We can't get out. We have to find our way to live with it and find a way to make it better.

How much of yourself do you share in your work? How have you found a balance between your private, interior thoughts and emotions and what you are willing to share and channel through your writing and public voice?

I write to live, I don't live to write. The most important things to me in my life are my wife and my dog. My family and friends. If someone said, "Do you want to create the perfect piece of art or do you want to make sure your kids are happy today?" I want my kids to be happy. If someone said, "Let's create the perfect comic book and it would sell a ton but there would be no heart in it," I'd say yes, let's do it. But I also don't know how to do that. The only way I write well is when I write personal. I find that when I get away from that, the work isn't good and then I'm not making any money and I'm not supporting my family. Personal is the only way I know how to write. I think it's just necessary. If I could write another way I would do it.

The trick is you cannot think about anything except that you have to get that script in. What freed me as a writer was reading this book on old dime-novel writers. I would try to write and would get so paralyzed because the work wasn't perfect, I had to get that sentence right. And then I started reading about these dime novelists who had to get the work done to get a paycheck and pay the rent, and then they would go on to the next project. And these guys are writing with skill. That freed me. When you start to think about writing as a career, as a job, it is something you have to do. Be the best you can be. Turn it in and onto the next one.

In writing Batman, how do you inhabit that character?

The biggest and best problem with Batman is that Frank Miller wrote him already. In many ways you are always dealing with the ghosts of his "Batman: Year One" and "Batman: The Dark Knight Returns." With Mister Miracle or Vision I have a shot. And you're never going to do a Joker better than Heath Ledger. It is never going to happen. That is the first challenge. "Batman" was hard for me. If you look back at my first six issues you see me struggling to find my voice. I hadn't yet found a central conflict that I could relate to. But then there is this battle between this vow Batman made to stop  crime and how he is madly in love with Catwoman who is also madly in love with him. Those two things clash and come apart. Once I figured that emotional dimension out, I understood who Batman was.

Comic books and graphic novels have gone from the pulps, the penny press and disposable popular culture to now being, in their best examples, considered as literature. What do you think has been gained or lost in that journey?

"Literature" is one of those words that is thrown around in marketing and pitch meetings. When Shakespeare was writing, he wasn't thinking of his work as "literature." Consider classic and wonderful ballroom dancing by Fred Astaire and Ginger Rogers. We consider it high-class, the equivalent of literature. You watch "Swing Time," you watch "Top Hat," and what Fred Astaire is doing there is showing a mastery of the high art of that era -- the waltz, the foxtrot and the like. But he's also a master of what were considered to be completely disposable arts. Astaire is a master of tap and jazz. What he does is to put those two things together and create something American.

Louis Armstrong created jazz by combining low art and high art. He made something American. I wouldn't compare myself to those two guys, and I don't know if my work is literature, but I do hope that it is truly American.