Before she died, Barbara Bush had this to say about Trump's Republican Party 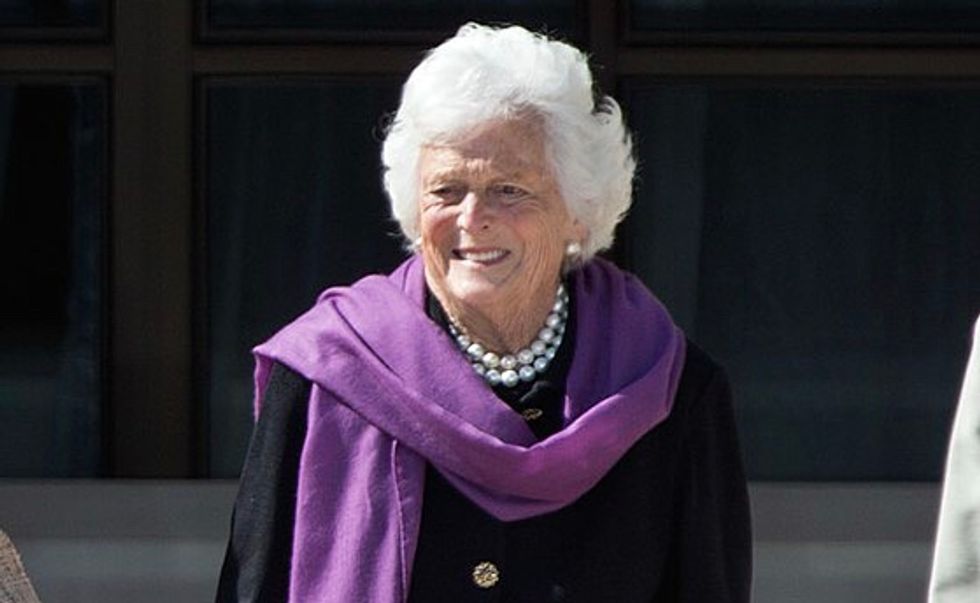 Image credit: White House / Lawrence Jackson
First Lady Michelle Obama pauses with former First Ladies Laura Bush, Hillary Rodham Clinton, Barbara Bush, and Rosalynn Carter during the dedication of the George W. Bush Presidential Library and Museum on the campus of Southern Methodist University in Dallas, Texas, April 25, 2013. (Official White House Photo by Lawrence Jackson) ..This official White House photograph is being made available only for publication by news organizations and/or for personal use printing by the subject(s) of the photograph. The photograph may not be manipulated in any way and may not be used in commercial or political materials, advertisements, emails, products, promotions that in any way suggests approval or endorsement of the President, the First Family, or the White House.
Matthew Chapman
March 27, 2019 News & Politics

In April of last year, former First Lady Barbara Bush passed away. A towering figure, she was mourned by the nation and was joined by her husband seven months later.

Bush was the quintessential Republican matriarch. She was the wife of one president, the mother of another, and her children and grandchildren have served in office across multiple states, all as Republicans.

Which is why what she had to say about the direction of her longtime party in the months preceding her death, as told in an upcoming biography excerpted in USA TODAY on Wednesday, is stunning:

It wasn't technically a heart attack, though she called it that. It was a crisis in her long battle with congestive heart failure and chronic pulmonary disease that hit her like a sledgehammer one day in June 2016. An ambulance was called to take her to the hospital. The two former presidents who had been at home with her that day, her husband and her oldest son, trailed in a car driven by the Secret Service. The tumultuous presidential campaign in general and Trump's ridicule of son Jeb Bush in particular had riled her. "Angst," she told me.

Bush's dislike of the president was hardly a secret — during the 2016 campaign, she said "I don't know how" women could ever vote for him. But the fact that her whole party is marching to the beat of his drum had shaken her whole belief system — to the point that when she was asked whether she still considered herself a Republican in February 2018, she said, "I'd probably say no today."

When asked whether she believed the country was on the right track under Trump, she said, "I'm trying not to think about it. We're a strong country, and I think it will all work out," but that the behavior of her party and the growing political divide worried her.