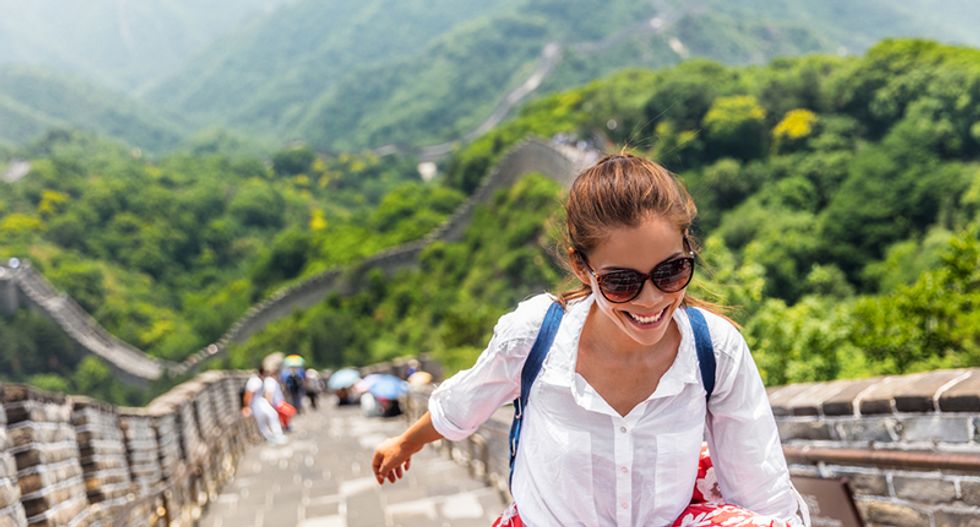 Call me crazy, if you want, but I think I see how to do it!

As a start, consider the problem of President Trump’s embattled “great, great wall,” the one to be built across 1,000 (or is it 2,000?) miles of our southern border, the one that so obsesses him, filling every other hour of his tweet-storming day, the one that a recalcitrant Mexican government refused to pay for, that Congress wouldn’t pony up the money for, and that striking percentages of Americans don’t want to fund either. As for turning it into a national emergency, that's only going to line the pockets of law firms, not build the “big, fat, beautiful wall” of his dreams. But what if there were a simple solution, an easy-to-make deal that could solve his wall problem, while wiping the other intractable problem that goes by the name of China off the map of American troubles?

Wouldn’t that be a geopolitical magic trick of the first order, the art of the deal on a previously unimaginable scale? If your answer is yes, as it would almost have to be, then here’s the amazing thing: just a little fresh thinking in Donald Trump’s Washington could make it so.

With that in mind, let me begin with China and show you just how it could be done. First, a simple question: Historically speaking, what country has had the greatest success building great, great walls? It’s a no-brainer, right?

I mean, how long is China’s famed Great Wall? Not a mere couple of thousand miles, but more like 13,000 of them (as Donald Trump himself has, in the past, pointed out). Admittedly, the idea of that wall -- if not the actual set of walls built at different moments in history -- was initially conceived of in 220 BC by Qin Shi Huang, the first emperor of a unified China. And here’s the remarkable thing: the construction of various versions of his wall continued, on and off, for almost 2,000 years, into the mid-seventeenth century. Urban legends aside, China’s Great Wall is not visible to the naked eye from space, but it’s no less impressive for that. It was meant to keep out the nomadic peoples of the Asian steppes and other “barbarians” who might threaten the empire. Admittedly, as will undoubtedly be true of Trump’s future great wall (if it’s ever built), China’s version kept out far less than was advertised. Otherwise, there would never have been either a Mongol or a Manchu dynasty, both founded by invading groups from outside the wall.

Still, that country’s Great Wall is a monument to the building and engineering skills of a remarkable imperial power and, even in the twenty-first century, remains a tourist magnet. (More than 10 million people visit it annually.) That, in turn, should appeal to the Donald Trump we all now know so well, the man who clearly would, in the fashion of the Qin emperor, like his name to be highlighted in the history books a couple of thousand years from now. You know, the guy who is eternally eager to give the thumb (“You’re fired!”) to anyone not willing to make it so (which, of course, means just about everyone).

At the moment, he and his men are deep in a fierce trade war, escalating tariff battles, high-pressure negotiations, and various kinds of semi-militarized struggles with China, a country that, alone on the planet, has a special relationship to great walls. Now, do me a favor: keep all of that in the back of your mind for a moment, while I move on to some history that’s a little closer to home.

When it comes to the building of monumental infrastructure of the most tangible sort (rather than that of the virtual world), what country on this planet would you normally look to? In the 1950s or 1960s, it would, of course, have been the United States. In those decades, from superhighways to airports, this country was the planet’s infrastructure-building powerhouse.

Almost half a century later, though, it’s quite another story. In 2017, for instance, the American Society of Civil Engineers gave U.S. infrastructure a D+ on a “report card” it issued. From dams to roads, levees to drinking-water systems, airports to public transit, the situation could hardly have been more dismal. Imagine this: the highest grade, a “B,” went to “rail” in a country that has yet to build a single high-speed mile of it (and whose only significant high-speed line in the late planning stages, the one that was to run between San Francisco and Los Angeles, now seems to be going down). China, on the other hand, already has 15,500 miles of high-speed rail and far more planned for the future.

In reality, Americans simply don’t invest in infrastructure any more. Our airports generally have a third-world feel to them, our rail lines are sagging, public transportation is generally a joke, highways potholed, and few in Washington seem to give a damn. As of 2019, despite moments of Trumpian braggadocio about a supposed $1.5 trillion infrastructure investment plan -- largely a scam that has yet to arrive in Congress -- the only kind of infrastructure still getting attention is, of course, the president’s great wall to nowhere. And if it ever does get started, you might think twice about letting American companies loose on it, given their lack of recent experience with infrastructure construction. All of which leads me back to China.

The Belt, Road, and Wall Initiative?

The president is now knee deep in a trade war with China that couldn’t be more threatening. His tariffs (and the tariffs that country slapped on American goods in return) have already hitthe Chinese economy in ways that could, in the long run, destabilize it. If so, in what’s still a distinctly global economy, the U.S. would undoubtedly be clobbered, too.

Now, add in just one more thing: unlike the United States, twenty-first-century China has launched what could prove to be the greatest global infrastructure project of all time. I’m thinking of Beijing’s Belt and Road Initiative, a projected series of pipelines, rail lines, highways, ports, and the like that Beijing is intent on helping finance and construct across much of Eurasia and Africa at an initial cost of more than $1 trillion and, in the future, up to $8 trillion. It’s a plan meant to span 64 countries, potentially linking significant parts of the global economy directly to Beijing for decades to come.

Given all of the above, here’s my suggestion to you, Mr. President: make this country the first in the Americas to join that project. In the process, you would, of course, insist on relabeling it the Belt, Road, and Wall Initiative, or even the Donald J. Trump Belt, Road, and Wall Initiative. You would then simply take those punitive tariffs and that trade war of yours off the table in return for one simple thing: the twenty-first century’s empire of infrastructure, that land of Great Walls, would have to take full responsibility, at a cost of between $25 billion and $70 billion, for fulfilling your promise to your base and building that long-ballyhooed great wall of yours along the U.S.-Mexico border.

Admittedly, you continue to claim that your wall is already being built, but of course it isn’t. Not a mile of it. And given the morass of court cases and other roadblocks likely to follow your recent national emergency declaration, that could be the situation for the rest of your term, during which you, your family, and the wall could all find yourselves locked in a myriad of court struggles. And yet, with a single decision you could instantly create a planet on which the two largest economies were no longer at war and a truly great, great wall, one to boggle even your imagination, might indeed be built, its parapets emblazoned with your name in giant gold letters. That future Chinese wall in North America, stretching from the Pacific Ocean to the Gulf of Mexico, might even be the first wall on the planet truly visible to the naked eye from space.

Imagine for a moment if, in election campaign 2016, you hadn’t so vociferously and repeatedly assured that base of yours that the Mexicans would pay for your wall. After all, had you known your history a little better, you would have realized that Mexico lost most of its wall-building moxie in its post-Aztec incarnation. But what if, from the very beginning, you had called upon China to pay for and construct the wall instead? Had you done so, much that has been tense and threatening to the global economy (not to speak of the possibility of a future World War III) might have been avoided. Still, even on this increasingly absurd planet of ours, it’s not too late for you to decisively move in another direction.

Were you to do so, it would instantly be the deal of at least the century and you would be the dealer of perhaps any century. Of course, it goes without saying that, given the historical record, you would have to grant the Chinese another 2,000 years to complete the greatest wall of all.