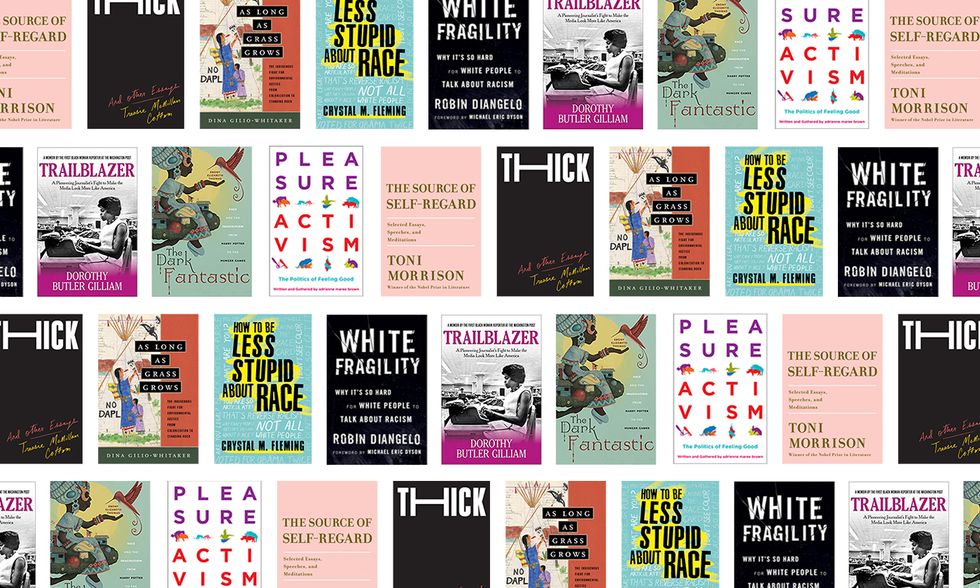 The first time I read the phrase “year of the woman” was in relation to the 1992 election. That year the most women ever—four—had been elected to serve in the U.S. Senate. Today, there are 25.

And after millions of women across the world marched in protest of Donald Trump’s presidency, the explosion of the #MeToo movement, and last year’s record-breaking election of women to Congress—particularly women of color—the label endures.

Truth is, every year is the “year of the woman.” Women have always been significant actors in the pursuit of social justice. And though their status has not been upheld and recognized by those in power, their work has been documented for us to use as a compass for navigating today’s global perils.

In honor of Women’s History Month, I’ve compiled a list of books by women authors whose writings challenge global White supremacist, capitalist, patriarchal power structures that many of us work to dismantle every day.

The Source of Self-Regard: Selected Essays, Speeches, and Meditations by Toni Morrison (2019)

No list of literary works—by women or men, Black or White—is complete without Toni Morrison. Winner of the Nobel Prize in literature, and known mostly for her 11 novels, Morrison just released her most recent piece of nonfiction, providing insight into the fertile and expansive mind that gave birth to characters such as Pecola Breedlove of The Bluest Eye, Sethe of Beloved, Hagar of Song of Solomon, and Sula and Nel of Sula.

Divided in parts, The Source of Self-Regard is Morrison taking on the socio-cultural-political justice issues that have spanned the ages. In the introduction, aptly named “Peril,” she writes, “Certain kinds of trauma visited on people are so deep, so cruel, that unlike money, unlike vengeance, even unlike justice, or rights, or the goodwill of others, only writers can translate such trauma and turn sorrow into meaning, sharpening the moral imagination.”

Thick: And Other Essays by Tressie McMillan Cottom (2019)

Want an honest, unfiltered opinion of what is right and wrong in the world? Settle in for Cottom’s second published work that explores identity, pop culture, social media, and, of course, Donald Trump. Cottom is fearless on her musings across the eight pieces that constitute Thick. In them, she gives us something to ponder, weaponry of sorts to engage in transformative dialogue.

It should come as no surprise that the two essays that resonated with me most address race. I feel a kinship with Cottom in her essay “Know Your Whites.” It’s always been my position that Black people would do well to study White people. Our very existence has been shaped by a structure of White superiority, and it is imperative that we understand it—and that they also understand it. Cottom writes, “To know our whites is to understand the psychology of white people and the elasticity of whiteness. … To know our whites is to survive without letting bitterness rot your soul.”

In “Black Is Over (or, Special Black),” she explores what she calls a false choice between types of Black people. Ever heard it said of someone, “S/he’s different, they’re not like other Black people”?

This idea suggests that other Black people are basic Black, or what Cottom refers to as “black-black or regular black.” On the other hand, those who are “different” are the special Black people, or Black ethnics, who are not descendants of slavery or the Great Migration. It’s this type of Black person, Cottom says, whose voice has been valued or viewed as more credible lately in mainstream discourse and academic spaces (think: Trevor Noah, Luvvie Ajayi).

As Long as Grass Grows: The Indigenous Fight for Environmental Justice From Colonization to Standing Rock by Dina Gilio-Whitaker (2019)

Borrowing a phrase from President James Monroe’s 1817 promise to the Cherokee Indians for its title, As Long as Grass Grows explores the history of Indigenous peoples’ struggles—from treaty violations, genocide, and human trafficking to food and water security struggles and protection of sacred sites.

The world became aware of current-day Native resistance to multiple injustices only a few years ago when the Standing Rock protests dominated news cycles and social media threads. As Long as Grass Grows connects the dots to the history that led up to Standing Rock and explores where we need to go as a nation to achieve full environmental justice.

Gilio-Whitaker writes that the purpose and goal of the book is to highlight the importance of building alliances across social and racial divides. “To do this requires an honest interrogation of the history of the relationships between the environmental movement and Indian Country.”

How to Be Less Stupid About Race: On Racism, White Supremacy, and the Racial Divide by Crystal M. Fleming (2018)

It is a hard, in-your-face lesson on what is race and racism, how it is institutionally, systemically, and systematically upheld, how we all participate in upholding it, and what we can do to be more literate about it.

And, yes, there’s a call to action for those who are serious about challenging the structures of racism.

White Fragility: Why It’s So Hard for White People to Talk About Racism by Robin DiAngelo (2018)

So, maybe you’re not ready for Fleming. It’s often said in some circles, “If a White person said it (something significant), then folks would listen.” So, then maybe DiAngelo is more digestible for you.

In White Fragility, she offers a message to fellow White progressives on a matter that until recently had been solely considered a non-White problem: race, or, more specifically, racism. Because being White has historically been normalized, bringing attention to the harm caused by racism and White supremacy often causes discomfort to most White people. As a result, they “perceive any attempt to connect [them] to the system of racism as an unsettling and moral offense.”

This book is not only a must-read—it’s necessary for White people who want to work collectively to fight against racism and White supremacy.

Over the past 60 years, social justice movements have had their peaks and valleys, and Dorothy Butler Gilliam has covered them all. Falling in love with journalism at the age of 16, Gilliam was the first Black woman to be hired at the Washington Post.

In her memoir, Trailblazer, she shares her journey of breaking down the color barrier in an industry dominated by White men.

The Dark Fantastic: Race and the Imagination From Harry Potter to the Hunger Games by Ebony Elizabeth Thomas (2019)

There has been much public discourse lately about the lack of diversity in books, particularly children’s books; over 85 percent of all published books for children and young adults feature White characters.

Author and educator Ebony Elizabeth Thomas refers to this “diversity crisis” as an imagination gap. The gap she explains extends far beyond the mere lack of representation of characters of color, but also shows up in “stereotyping, caricature, and marginalization of people of color, poor and working-class children and families, gender and sexual minorities, immigrants, and other minoritized groups.”

In Dark Fantastic she offers a scholarly analysis of this phenomenon, providing critical counterstorytelling. Unlike Afrofuturism, Black fantastic, or speculative Blackness—genres that counter traditional science fiction stories and are written by Black authors—Dark Fantastic considers the work of White authors, television writers, and other storytelling creatives through networked communities, such as fandoms.

I consider all adrienne maree brown’s writings think pieces. When interviewing her for her book Emergent Strategy, I wrote that I had to put the book down a few times to sit with something she’d written. Pleasure Activism is no different.

Although I was highly anticipating Pleasure Activism, I wasn’t ready for it. At first. There’s a lot of talk about sex. But the book isn’t about sex, exactly. It really is, as the title suggests, about pleasure.

To be sure, social justice activism can be unpleasurable. After all, we often use phrases like “fighting for justice” and being “in the struggle”—suggesting something harsh and violent. If we’re always struggling and fighting, how can we muster the capacity to consider “what feels good about this.”

But if we can unashamedly identify and embrace what pleases us when we get naked, literally, then we can bear all while working toward justice, equity and equality for all, and actually feel good while doing it.