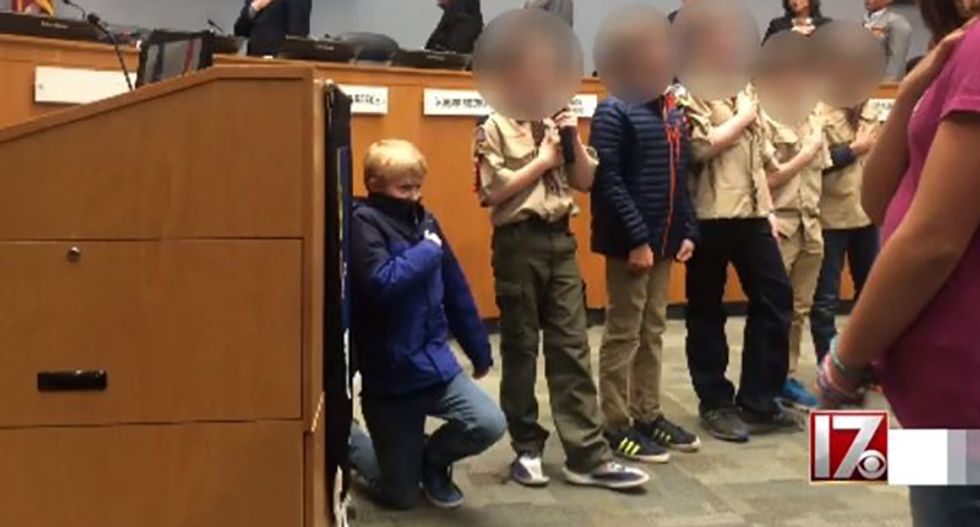 A 10-year-old Boy Scout won the praise of a local mayor as well as online observers Friday when the story of his decision to peacefully protest during the Pledge of Allegiance went viral.

Liam Holmes and his Cub Scout Pack had been invited to recite the pledge at a city council meeting at City Hall in Durham, North Carolina on Monday. After a discussion with his father about professional athletes who have taken a knee in recent years to protest police brutality and the police shootings of unarmed black Americans, Holmes decided to stage his own demonstration.

"What I did was took a knee against racial discrimination, which is basically [when] people are mean to other people of different colors," Holmes told CBS 17, an affiliate station in Durham.

Holmes' father expressed surprise and pride in an interview with the station, while Mayor Steve Schewel let the room know right away that the boy's protest was welcomed at City Hall.

"To the scout that expressed his conscience by kneeling, we will say that we endorse and appreciate all expressions of conscience in the Durham City Council," said Schewel.

On social media, others expressed their support for Holmes as well.

Some also gave credit to former 49ers quarterback Colin Kaepernick for first taking a knee during the national anthem at NFL games, starting in 2016. Some football players continued the protests in the most recent season, and athletes in other professional sports have joined as well.