What 2020 Presidential hopefuls can learn from Carter, Clinton and Obama's foreign policy 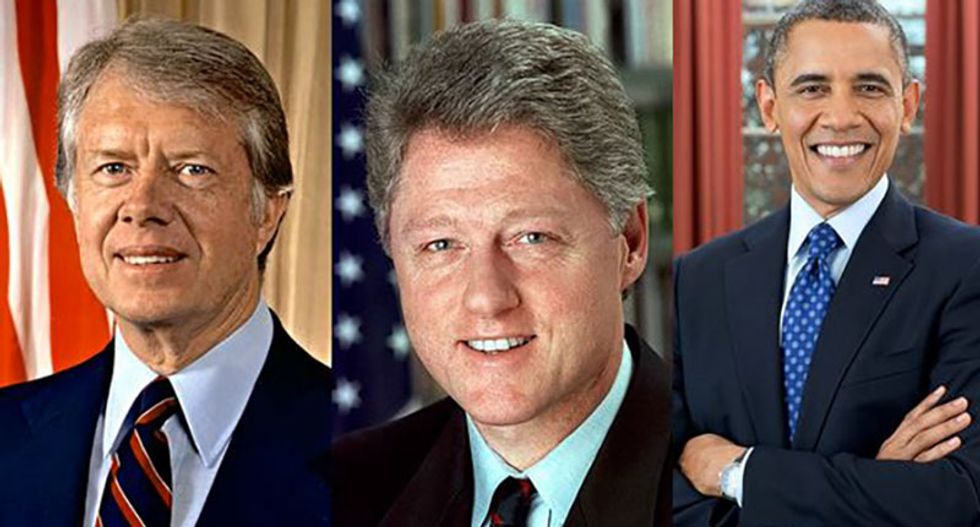 In the past half century, America has had three Democratic Presidents — Jimmy Carter, Bill Clinton, and Barack Obama—who all pursued peace and reconciliation in international affairs and diplomacy. The goal has been to repair historical divisions and resolve conflicts where possible.

Jimmy Carter promoted peace and diplomatic ties between Israel and Egypt, inviting Israeli Prime Minister Menachem Begin and Egyptian President Anwar el-Sadat to Camp David in 1978. The subsequent Camp David Accords, resulted in diplomatic recognition and an historic exchange of visits ushered in what is now 40 years of ties between the first Arab nation to recognize Israel and the Jewish state.

Carter also negotiated the Panama Canal Treaty, which led to eventual takeover of the Canal and the Canal Zone by the Panamanian government in 2000, improving relations with Latin America, and overcoming unfounded fears that Fidel Castro and Cuba would seize control of the Canal.  At home, this treaty helped promote the rise of the Far Right in the Republican Party and contributed to the election of Ronald Reagan in 1980.

In 1978 Carter went beyond the economic and travel ties Richard Nixon had established with the People’s Republic of China, by recognizing the mainland government as the government of China, rather than Taiwan, and rejecting a thirty-year old policy. While U.S. recognition enhanced the relationship of the world’s most populous nation and the world’s leading democracy, it did not lead to a long-term liberalization of the Chinese leadership.

Early in his first term, Bill Clinton pursued peace negotiations with Israeli Prime Minister Yitzhak Rabin and Palestine Liberation Organization leader Yasser Arafat. The resulting Oslo Accords were a step toward acceptance of co-existence between the Palestinians and Israelis, which failed miserably after Rabin’s assassination by a right wing Israeli in the fall of 1995. A later attempt in 2000 to reach a Camp David II Accord also failed. (Clinton blamed Arafat for its failure, at a time when the Israeli government was amenable to compromise, after the defeat of Benjamin Netanyahu as prime minister in 1999).

Like Carter with the People’s Republic of China, Clinton reconciled with a long-time adversary when he established diplomatic relations with the Communist nation of Vietnam in 1995, sending former prisoner of war Senator John McCain of Arizona, and Vietnam War participant Senator John Kerry of Massachusetts to finalize the reconciliation.

Also during the Clinton administration former Senate Majority Leader George Mitchell successfully negotiated the Good Friday Agreement between the warring Protestant and Catholic factions in Northern Ireland ---a settlement which is now in its twenty-first year.

Following through on his pledge, in 2011 Barack Obama withdrew U.S. forces from Iraq after eight years of bloodshed, although he later sent some troops back to counter ISIS, the terrorist group.

Four years later, Obama opened relations with Raul Castro’s Cuba, despite opposition from Republicans and Cuban Americans in South Florida. Relations with Cuba have cooled under Donald Trump and the issue of the Guantanamo Bay Naval Base, which the US has controlled since the Spanish American War, remains an area of dispute, as well as the issue of hearing loss suffered by western diplomats in Cuba.

Obama’s decision to join with the United Kingdom, France, and Germany, along with Russia and China, to pursue a nuclear deal with the Islamic Republic of Iran in 2015, to avoid that nation’s development of offensive nuclear weapons, which might threaten Israel, Saudi Arabia, and other Middle Eastern nations, was a well-regarded attempt to solve a major foreign policy dilemma although his successor has repudiated it.

None of the three Democratic Presidents had a “perfect” record of peace and reconciliation in diplomacy. Carter failed to release American hostages in Iran in 1980; Clinton led the belated bombing of Serbia in 1995 and the 1998 bombing in Kosovo; Obama continued military action in Afghanistan and Iraq. Nevertheless, the three Democratic presidents in the last half-century pursued peace and reconciliation within reasonable means and circumstances.

As one examines the major foreign policy issues that will probably be factors in the 2020 presidential primary, what stands out is the historical desire of Democrats to promote peaceful dialogue and avoid war.  However, the next president, Democrat or Republican, will face a daunting set of foreign policy dilemmas---everything from terrorism, immigration, North Korea’s nuclear program, and possible Russian collusion in U.S. politics to global warming, the Middle East, and the repair of the U.S.’s fractured relationships with its traditional allies.

It would be wise if the next President of the United States examined the records of accomplishment in foreign policy of the three most recent Democratic Presidents.  It is important to pursue dialogue but also make it clear that the nation will pursue its basic values of respect for human rights and maintaining a strong defense. Working through international organizations and restoring the strong ties America has had since World War II with its allies in Western Europe, Canada, and the Far East are essential to promote democracy and international stability and to deal with the growing crisis of global warming.  The next president must respect the sovereignty of other nations and avoid future military ventures to shape relations in the Western Hemisphere.

It is essential to make it clear to the Russian and Chinese governments that we insist on fruitful relations while remaining rivals.  Working with Kim Jong Un of North Korea to resolve the issue of his nuclear program is likely to be a major challenge as well.  Trying to resume diplomacy with Iran and Cuba would also be a positive move.  The Middle East will remain the most complex international challenge. We should remain loyal to the survival of Israel but not allow them to dictate American policy in the area.  And Saudi Arabia must not have an undue impact on American policy, as that would undermine the chances of a negotiated resolution of tensions in the area.  And the constant danger of terrorism is a never ending nightmare that the next American President will face.

The Democratic candidates must show they are ready to handle these challenges. Looking to their Democratic predecessors offers a valuable model of navigating international policy.