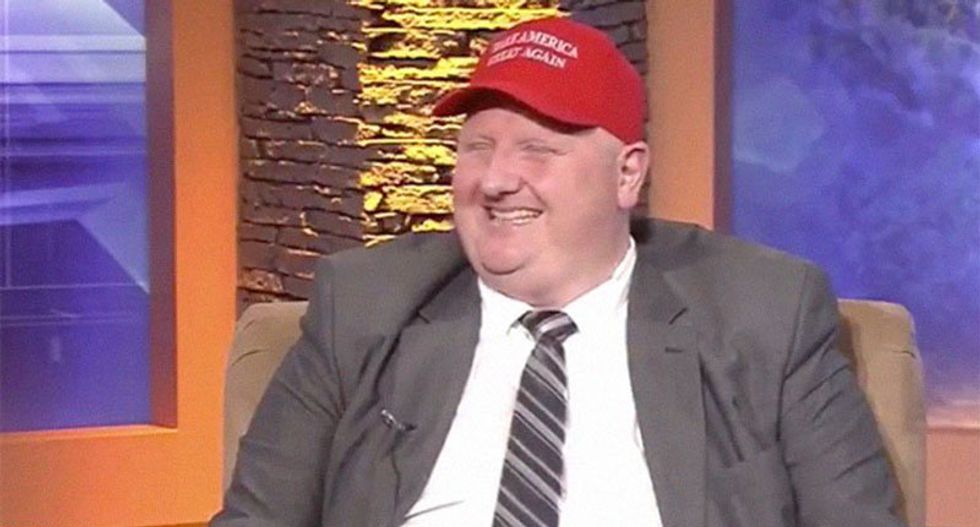 West Virginia state lawmaker Eric Porterfield isn't backing down from any of multitude of attacks on LGBTQ people, but now he's walking back comments he made suggesting he would drown his own children if they came out as gay.

In a lengthy interview Delegate Porterfield told WVVA he would take his daughter to get a pedicure and his son hunting, and then he would see if they "could swim" afterwards. He repeated his chilling remarks, all the while smiling and grinning.

Porterfield took to Twitter and Facebook (after re-opening his closed-off Facebook page) Tuesday evening to claim he only suggested he'd drown his gay children because "Liberals always take the bait."

Now, after several people took to social media to wonder if he's a fit parent, Porterfield says he would "love them, pray for them, fast over them," if his children "did indulge in any type of sinful life."

Porterfield, who founded Blind Faith Ministries, did not address his own acts of bearing false witness.

The West Virginia freshman lawmaker first came under fire for calling LGBTQ people terrorists and comparing them to the KKK.

In his WVVA interview Porterfield called LGBTQ people "bullies," "tyrants," and "oppressors," and labeled them "a political socialist group that really uses means like economic extortion."

"It probably will not be long before they're burning rainbow flags in peoples' yards because they have no care for diversity of thought, and their message is simply hate. They are proving it with all of the things that they have done and they are the modern-day version of the KKK," Porterfield said.

"The LGBTQ is suppressing the freedom of people that disagree with them and forcing their ideology – and if they do not get their way they cause chaos, apply pressure, intimidate, internet stalk," he charged. "I'm wearing my MAGA hat today, even though I'm very much in fear of the terroristic activities that they engage in."

That's just a portion of Porterfield's remarks attacking LGBTQ people. He offered no proof or examples.