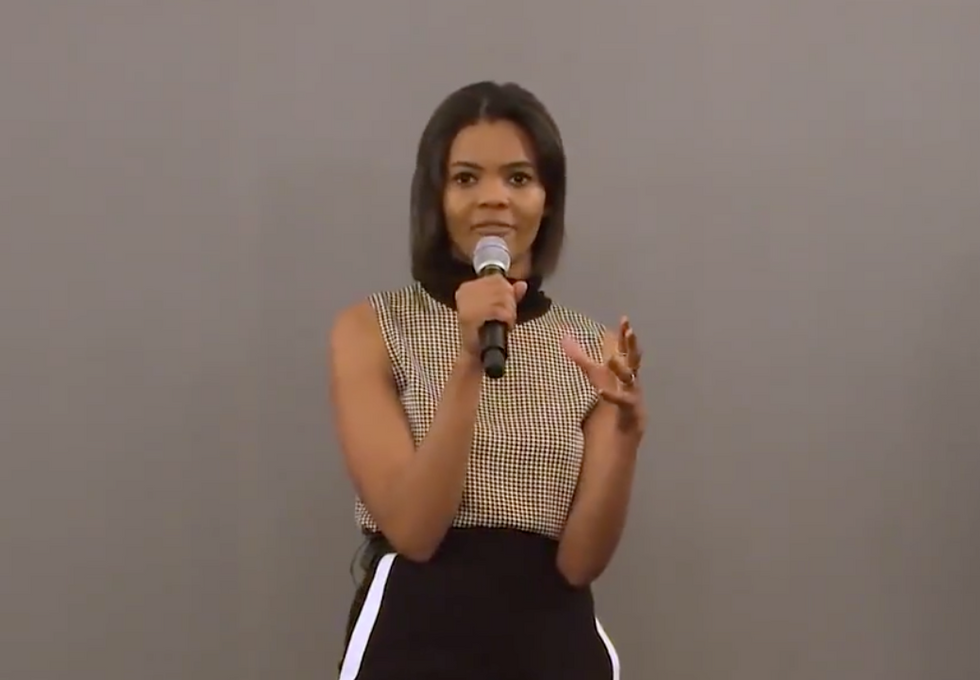 In a video posted on Twitter Friday by Media Matters for America's John Whitehouse, right-wing activist Candace Owens shared disturbing comments about her views on nationalism and Adolf Hitler.

The video showed an event discussed in a BuzzFeed News article published Friday. It reported that the event, at which she was joined by fellow fan of President Donald Trump and founder of Turning Point USA, Charlie Kirk, was held in December.

During the event, Owens was asked about her views of nationalism.

“I actually don’t have any problems at all with the word ‘nationalism.' I think that the definition gets poisoned by elitists that actually want globalism. Globalism is what I don’t want," she said. "Whenever we say nationalism, the first thing people think about, at least in America, is Hitler. You know, he was a national socialist."

She continued: “But if Hitler just wanted to make Germany great and have things run well, OK, fine. The problem is that he wanted, he had dreams outside of Germany. He wanted to globalize. He wanted everybody to be German, everybody to be speaking German. Everybody to look a different way. To me, that’s not nationalism. In thinking about how we could go bad down the line, I don’t really have an issue with nationalism. I really don’t.”

Of course, Hitler is famously one of history's most horrendous dictators whose plan to "make Germany great" involved committing genocide internal to the country, not just outside its boundaries. This was driven by his nationalism — which Owens says she has no problem with — a monstrous view of what it meant to be German and who the nation's enemies were. And the fact that she so carelessly dismisses this vicious part of the ideology is a perfect example of why those defending supposedly new versions of nationalism should not be taken seriously.