No deal: Donald Trump abruptly walks out on denuclearization summit with Kim Jong-un — leaving the Hanoi summit in tatters 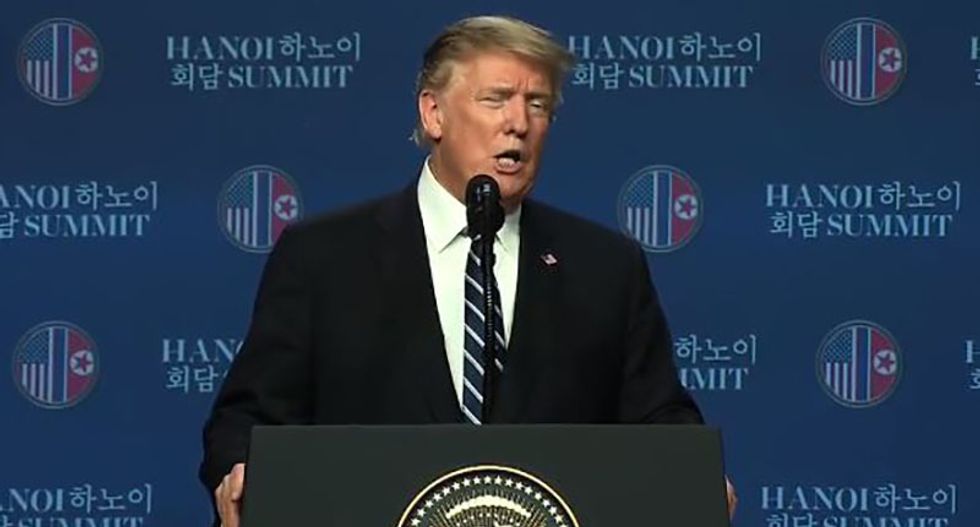 President Donald Trump walked out of the Hanoi summit with North Korean dictator Kim Jong-un, raising questions about the already-tense state of US-North Korea relations in the process.

"Sometimes you have to walk," Trump told reporters at a press conference shortly after his talks with Kim Jong-un fell apart, according to The New York Times. The president went on to explain that the North Korean government demanded a full lifting of all sanctions in return for the dismantling of some of its nuclear arsenal, a bridge that the president — who has previously been criticized for being too accommodating of the North Korean regime — was unwilling to cross.

"Basically they wanted the sanctions lifted in their entirety and we couldn’t do that. They were willing to denuke a large portion of the areas that we want, but we couldn’t give up all of the sanctions for that," Trump told the reporters.

Although North Korea had offered to dismantle its main nuclear complex in Yongbyon, Trump insisted that that wasn't a step far enough.

"He would do that but he wants the sanctions for that. As you know, there’s plenty left after that. I just felt it wasn’t good," Trump explained.

One point where Trump defended Kim was on the controversial death of Otto Warmbier, an American student who was accused of stealing a North Korean propaganda sign and was sentenced to 15 years hard labor in 2016. When he was finally released more than a year later, he had suffered a catastrophic brain injury and died shortly thereafter. The Kim regime has denied torturing Warmbier to death and Trump sided with them.

"He tells me that he didn’t know about it, and I will take him at his word," Trump told reporters.

Trump walking out on Kim makes the Hanoi summit a failure, according to many experts.

As Jenny Town, research analyst at the Stimson Center and managing editor and producer of "38 North," told Salon earlier this week, the best case scenario for the summit was "we come away with an agreement similar to what we've seen in the inter-Korean accords, where we have a work plan for a short-term period that lays out some very concrete steps for both sides." The worst case scenario, by contrast, was "we come away with no substance and only a reiteration of political will."

That reiteration of political will was indeed what happened, despite the president at one point being so smitten with Kim that he declared that he "loved" him in September.

"We are doing great. That was a big, big problem. And you know the interesting? When I did it, and I was really being tough and so was he. And we were going back and forth. And then we fell in love, okay?" Trump said in September. "No really! He wrote me beautiful letters. And they're great letters. We fell in love... Now they'll say, 'Donald Trump said they fell in love. How horrible! How horrible is that! So unpresidential!' And I always tell you, it's so easy to be presidential. But instead of having 10,000 people outside trying to get into this packed arena, we'd have about 200 people standing right there."