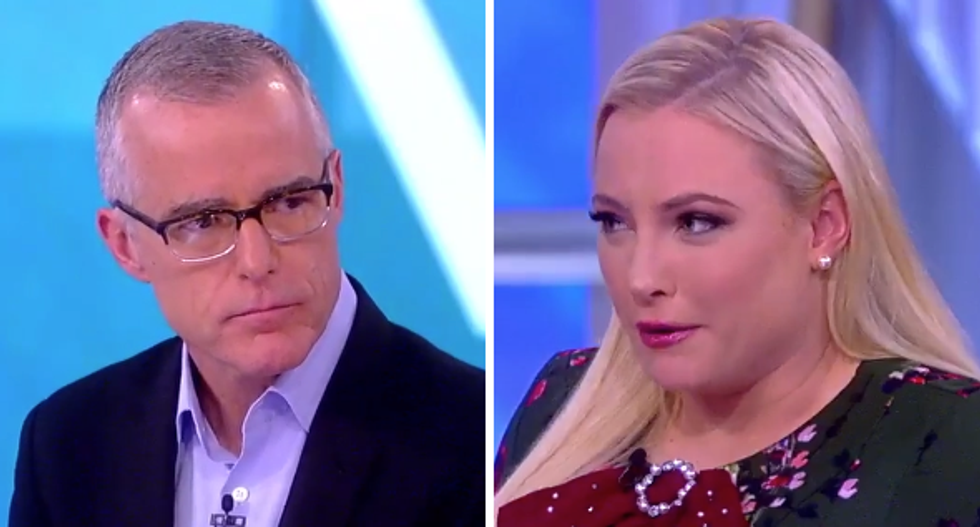 Former FBI Deputy Director Andrew McCabe has been receiving his share of media attention in recent days. In addition to an in-depth interview with The Atlantic’s Natasha Bertrand late last week, McCabe was seen on ABC’s “The View” today—and Meghan McCain questioned him aggressively about the events of 2017.

2017 was a turbulent year at the FBI, with President Donald Trump firing former FBI Director James Comey. The conservative McCain (daughter of the late Sen. John McCain) asked if McCabe leaked FBI-related information to the New York Times in 2017.

McCabe responded, “Absolutely not. Not in any time ever. You should understand, Meghan, that when I was serving as deputy director, I was one of two people in the FBI who had the authority to disclose information to the media. That is an FBI policy. It’s baked into the way that we run media relations in the organization.”

McCain went on to ask McCabe why Comey and McCabe have different versions of what the FBI told the media in 2017. McCabe responded, “I don’t know why Jim Comey doesn’t remember the conversations that we had in the same way that I do. It is understandable: he was under an enormous amount of stress at the time.”

Joy Behar, one of McCain’s fellow panels on “The View,” interjected, “I thought you guys wrote everything down.”

McCabe explained, “We wrote down things when we were dealing with people we didn’t trust”—to which Behar quipped, “Uh-huh, like the president.” And McCabe responded, “Exactly.”