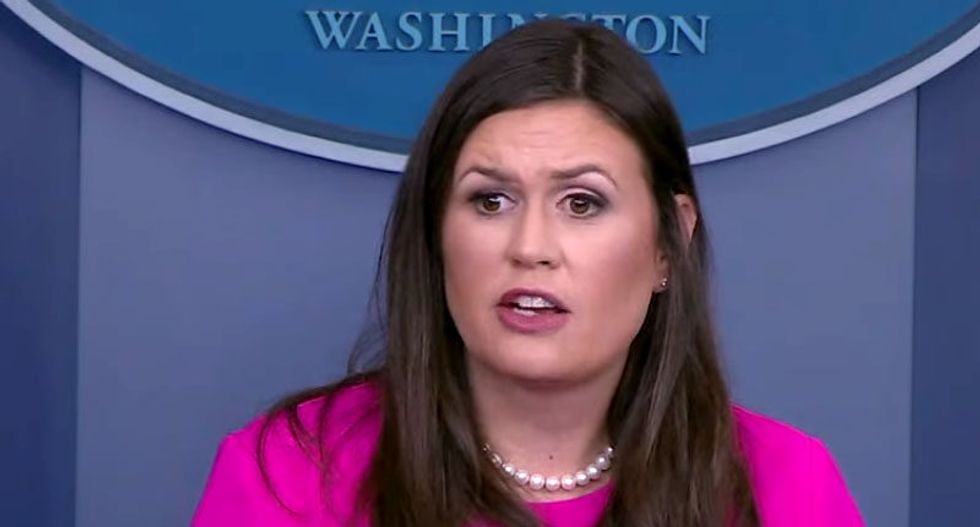 After it was revealed that President Donald Trump apparently dedicated about 60 percent of his work schedule over the last three months to what the White House refers to as "executive time," press secretary Sarah Huckabee Sanders sought to rebrand the commander-in-chief's unstructured daily schedule and ambiguous activities during his free time in the White House.

In response to the report published by Axios, who obtained Trump's day-to-day schedules for the past three months, Sanders emailed the news outlet to say Trump "has a different leadership style than his predecessors, and the results speak for themselves." The point of Trump's more than 300 hours in unstructured time, Sanders said, is "to allow for a more creative environment that has helped make him the most productive president in modern history."

"President Trump has ignited a booming economy with lower taxes and higher wages, established the USA as the No. 1 producer of oil and gas in the world, remade our judiciary, rebuilt our military and renegotiated better trade deals," Sanders added. "It's indisputable that our country has never been stronger than it is today under the leadership of President Trump."

An early riser, Trump usually spends the first five hours of his day in "executive time," according to Axios. Although the private schedules list him as being in the Oval Office from 8 to 11 a.m. ET each day, the president actually spends those hours in his residence "watching TV, reading newspapers and responding to what he sees and reads by phoning aides, members of Congress, friends, administration officials and informal advisers," the news site reported, citing six sources with direct knowledge of the matter.

"He's always calling people, talking to people," a senior White House official told Axios. "He's always up to something; it's just not what you would consider typical structure."

Trump's first scheduled meeting of the day typically occurs around 11 or 11:30 a.m. ET and is often an intelligence briefing or meeting with his chief of staff, Axios reported. The news site said the 51 private schedules it obtained reveal that, since Nov. 7, one day after the 2018 midterm election cycle, during which the Democrats seized control of the House of Representatives, Trump has spent about 297 hours in executive time and about 77 hours in meetings that included policy planning, legislative strategy and video recordings.

The news site reported that former White House chief of staff John Kelly, who exited 1600 Pennsylvania Avenue in December, installed the concept of "executive time," because the president purportedly hated being locked into a structured schedule.

Many of Trump's tweet storms have taken place during the swaths of "executive time." The news about the president's schedule revolving around watching TV and tweeting has been previously revealed — and it does not come as a surprise to the political observers and social media users who have noticed how the president's tweets often reflect the programming on Fox News.

In describing the relationship between the conservative-leaning cable network and the Trump administration, Salon's Heather Digby Parton wrote, "Fox has become Trump's de facto kitchen cabinet and unofficial communications office, creating a tight feedback loop between the far right and the White House."