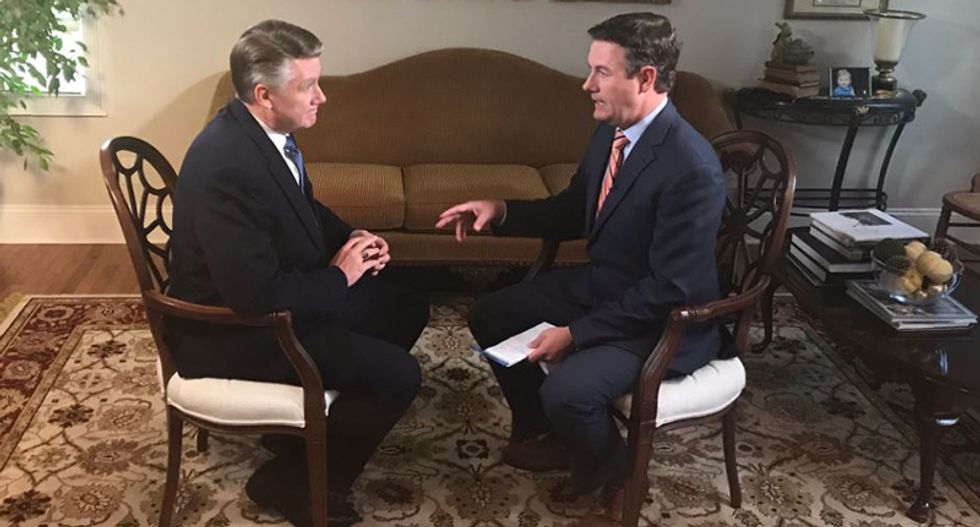 The GOP got some good news on Tuesday when 2018 nominee Mark Harris announced that he would not seek the Republican nod in the upcoming special election for North Carolina’s 9th Congressional District and that he was backing Union County Commissioner Stony Rushing. Harris’ statement only mentioned his health problems and did not note the election fraud conducted on his behalf last year, which led the bipartisan state Board of Elections last week to unanimously vote to invalidate the results of that contest and order a new election. (The Washington Post has a great look at how this all went down.)

Still, it’s possible that the GOP could get stuck with Harris, whom national Republicans labeled “toxic” back in December. Right before they lost their illegally gerrymandered supermajorities last year, the Republican-led state legislature passed a law mandating new primaries whenever a new election is ordered in a congressional contest.

That law is a change from prior practice, which would have required only that a new general election be held between the existing nominees. This would have left Harris as the GOP nominee. Democrat Dan McCready, who was Harris’ opponent in 2018 and is running again this year, said Friday that he and his team would decide over the next several days whether to challenge this new law.

However, at least for now, we have a wide-open GOP primary for this suburban Charlotte seat. Rushing, whom Harris endorsed Tuesday, confirmed he was running hours later. Rushing, who owns a firing range and firearms store and is quite the conspicuous dresser, has been an ardent Harris defender throughout this long odyssey. He railed back in December that the fraud investigation was "a political coup by the state Board [of Elections] and the Democrat [sic] leaders on that board."

Rushing didn’t change his tune this weekend after even Harris called for a new election, which the Board voted to do hours later. Instead, Rushing posted on Facebook that it was the Democrats who were guilty of fraud. Sadly but predictably, Rushing is hardly an outlier among North Carolina Republicans. This week, state party chair Robin Hayes, a former U.S. congressman, put out a statement addressed to “Dan McCready and his Democrat allies,” that declared, “You did not get more legal votes and there are no free lunches in politics,” and, “You will be held responsible for the extreme positions your party has taken and your role to erase more than 283,000 legal votes by citizens of the 9th Congressional District.”

There are plenty of other Republicans who might run here. Former state Sen. Tommy Tucker, who co-chaired the influential Senate Finance Committee until he retired last year, told the Associated Press on Tuesday he was “95 percent sure” he’d run. Former Mecklenburg County Commissioner Matthew Ridenhour, who narrowly lost re-election in his historically Republican South Charlotte district last fall, said he’d decide next week if he’d enter the race. Union County GOP chair Dan Barry has been mentioned as a potential candidate for a while, and he doesn’t seem to be ruling it out. Barry cryptically said this week that “[g]eneral election candidates are chosen by the voters” and, “We’re going to let the voters decide.”

However, we can cross a few names off this list. Former Rep. Robert Pittenger, who narrowly lost renomination to Harris last year, reiterated that he wouldn’t try to reclaim this seat. State Sen. Danny Britt also said he wouldn’t run, and that he would back Tucker.