Lindsey Graham's shameful descent: How a maverick turned into a Trump sycophant 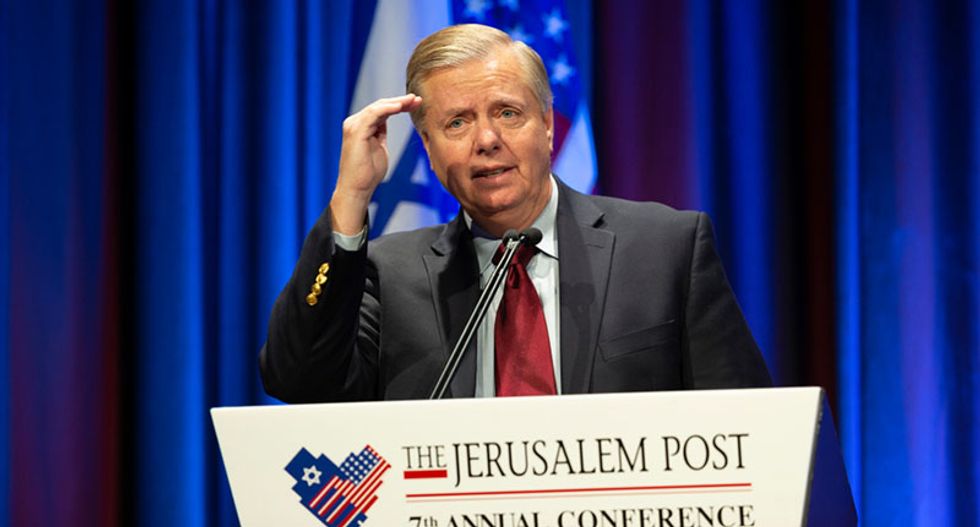 Two new TrumpWorld books were published this week, one by former New Jersey Gov. Chris Christie and the other by an unknown former White House staffer by the name of Cliff Sims. The only interesting parts of Christie's book concern his thirst for revenge against Trump son-in-law Jared Kushner, a beef that goes back years to when Christie put Kushner's father in prison for a sordid blackmail and fraud scheme. The other book, however, is a bit more revealing. Sims was on the campaign and then spent 15 months in the White House as a trusted Trump confidant. He took notes.

Sims appeared on the "Late Show" with Steven Colbert and made a comment that struck me as particularly observant:

"One of the things I try to do in this book is help people understand what makes Donald Trump tick. And one thing that never goes out of style in the Trump White House is someone who’s willing to go on TV and just fight it out with somebody. He knows [Kellyanne Conway] will go out there on any show and defend him."

Sims replied, “I think there’s no doubt that public loyalty to the president is of utmost importance to him.”

The comment made me think about the weird dynamic between Trump and Sen. Lindsey Graham, R-S.C., the new chairman of the Senate Judiciary Committee and one of Trump's fiercest defenders these days. Everyone knows it wasn't always that way. Back during the campaign, when Graham was running against Trump, and for some time afterward (when Graham dropped out but supported Jeb Bush), he was scathing in his assessment.

Graham called Trump a kook and a race-baiting bigot, among other things. According to this New York magazine profile by Lisa Miller, during the transition, Graham and his mentor, the late Sen. John McCain, plotted to lead a "brave Republican resistance." But McCain became terminally ill and Graham opportunistically shifted his loyalty to the president.

Miller writes that it all happened over lunch one day when "Graham and Trump discovered their mutual love for bro-ish trash talk and golf." She quotes a friend saying that Graham sees himself as the adult in the room and that "there’s something about, I’m not going to say innocence, but the president’s affability as well as his naïveté that Lindsey is drawn to."

In other words, Graham thinks he's able to manipulate Trump into doing his bidding. Indeed, according to a friend who knew Graham's thinking, he literally made that cynical calculation:

Graham understood that “all Trump really cares about is being celebrated,” this person said. By genuflecting to Trump, Graham could seem to be in collaboration with him — the impression probably most important to the president — and “move mountains behind closed doors."

Whether Graham "moves mountains" is debatable but I think that strategy has been obvious for a while. What's interesting to me is how he's going about it. Someone who has the president's ear is in a powerful position, and today Graham is closer to Trump than any other senator. This scene was memorialized on Twitter just this week:

Graham has betrayed his alleged principles and maverick reputation across the board, even as he makes half-hearted efforts to present himself to the press as an independent thinker who breaks with the president when he disagrees with him. He often falls back on his traditional conservative hawk credentials on foreign policy, coming before the cameras and sighing deeply when Trump makes one of his impulsive, ill-informed national security decisions which the GOP establishment perceives as a bridge too far. Graham will say he thinks it's a mistake and promises to talk to the president about it. Once in a while he'll feel compelled to weakly criticize Trump's crude behavior or blatant racism.

As Cliff Sims pointed out in that interview, that's obviously not something Trump ever wants to hear. He wants people to publicly defend him, no matter what. So Graham is walking a fine line and has to go beyond flattery to stay in the president's good graces. It appears he's discovered the best way to do that is to become a vicious, conspiracy-mongering attack dog. Trump will forgive almost anything if someone goes after his enemies with the same fervor he does.

We all watched Graham turn into a feral animal during Brett Kavanaugh's confirmation hearings and he has frequently appeared on Trump's favorite shows, "Fox expand=1] & Friends" and "Hannity," performing for an audience of one and warning the Democrats that he's coming for them:

You know, to my Democratic friends, if you want to look backwards, we are all going to look backwards. I want to know why the FBI reached the conclusion, along with the Department of Justice, that Hillary Clinton didn’t commit a crime. Was it because of political bias? … I intend to look at it. I’m going to look at it. If you are going to keep plowing everything up in 2016, count me in. If you want to look for it, I will look for it.

From his position as chair of the Judiciary Committee, Graham has the ability to deliver some real red meat to the president and his followers. Last week Igor Derysh reported for Salon on Graham's plans to investigate Hillary Clinton, something I've been predicting for more than a year. All you have to do is watch Fox News for any 10-minute interval and you'll see that their Clinton obsession burns even hotter than it did in 2016. Now Graham is prepared to throw fuel on the fire.

This week in the latest episode of phony handwringing from the newly anointed civil libertarians of the Republican Party, they are all bellowing about how the FBI treated the self-aggrandizing dirty trickster Roger Stone -- which was the same way it would treat any other accused criminal.  Fox News' Tucker Carlson said the FBI had staged "what was, in effect, a military assault on Roger Stone." Andrew Napolitano lamented, "This is jackboots in America, and there is no place for that in American life!"

Here's onetime Phoenix sheriff Joe Arpaio, rending his garments over the inhumanity of it all, and being schooled by journalist Radley Balko, an expert on militarized law enforcement excesses:

Yes, the people who gleefully shout "Lock her up!" are suddenly very concerned about due process.

And Lindsey Graham, the man who has previously argued that the government should be able to imprison people for life without trial, has dutifully joined the chorus, using his powerful chairmanship to demand that the FBI explain itself.

Donald Trump is no doubt very pleased to see Graham sticking up for his friend and going after his enemies publicly on TV. But a word of caution: Graham's ego is getting pretty inflated and he might just slip up and forget who's the leader and who's the sycophant. There is a long line of discarded toadies in Trump's wake.

Of course, if that happens Graham can always write a book.