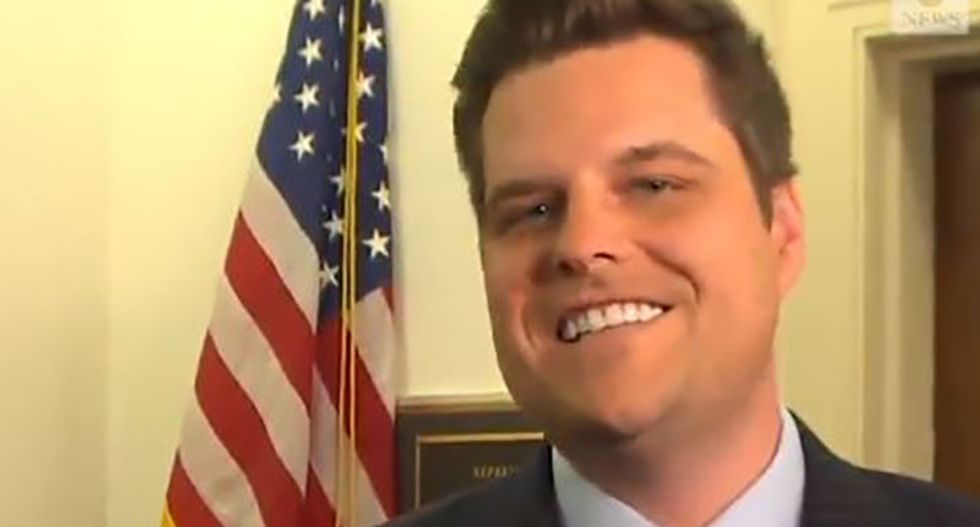 That appeared to be the consensus view of legal experts and scholars on social media late Tuesday after the Florida Republican fired off a tweet accusing President Donald Trump's former lawyer and fixer Michael Cohen of infidelity just hours before the latter was set to testify against his former boss in a House Oversight and Reform Committee hearing.

"Hey @MichaelCohen212—do your wife and father-in-law know about your girlfriends?" asked Gaetz, a fervent Trump loyalist.

While Gaetz later apologized for and deleted the offending tweet—insisting that it was "not [his] intent to threaten" Cohen—legal analysts were quick to describe the congressman's question as a cut-and-dry case of witness tampering and intimidation.

"If any of my clients did anything remotely close to what Gaetz did, prosecutors would charge witness tampering and obstruction. Haul them before a judge. Ask for detention on Rikers," declared Scott Hechinger, senior staff attorney and director of policy at Brooklyn Defender Services. "But if you're a congressman, you get to question the witness you intimidated the next day."

As Slate's Matthew Dessem put it, "every law professor with a Twitter account" seemed to agree with Hechinger's sentiment.

"Does your personal attorney know you've just engaged, very clearly, in the crime of witness tampering? Maybe tonight would be a good time for that chat," New York University law professor Ryan Goodman wrote in response to Gaetz's tweet.

"After the House Committee on Ethics thoroughly investigates this matter, I urge you to make any and all appropriate referrals to [the Department of Justice]," Rice wrote in a letter to House Ethics Committee chairman Rep. Ted Deutch (D-Fla.).

Gaetz's accusation against Cohen came on the eve of the former Trump fixer's testimony before Congress Wednesday morning, in which he will call the president a "conman" and accuse him of criminal activity.

"He is a racist. He is a conman. He is a cheat," Cohen will say, according to a copy of his testimony (pdf). "He was a presidential candidate who knew that Roger Stone was talking with Julian Assange about a WikiLeaks drop of Democratic National Committee emails."