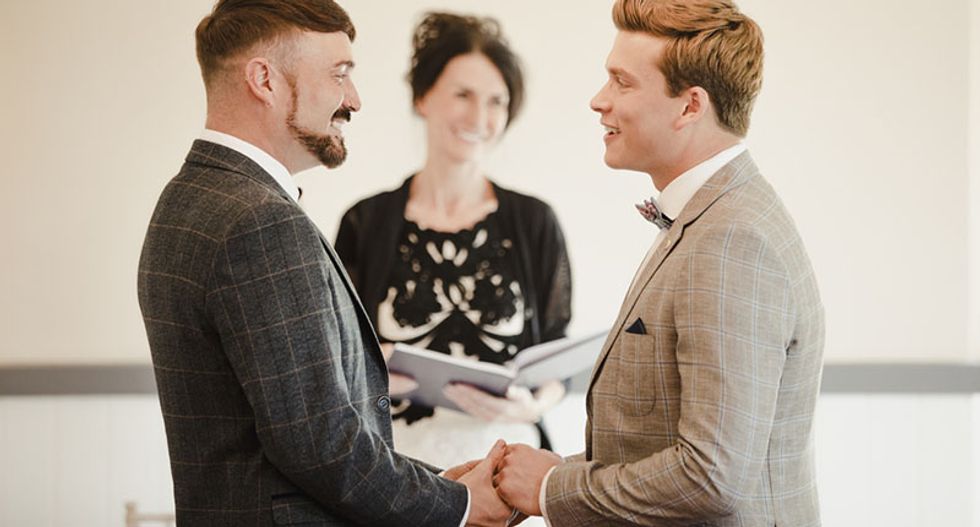 Nearly four years after the U.S. Supreme Court ruled that same-sex couples have a constitutional right to marriage, Republicans in the Kansas House of Representatives have filed legislation that aims to void same-sex marriage.

Not only would House Bill 2320 rescind those rights, it also would cement into law a litany of far right wing extremist claims, including that being LGBTQ is a "mythology," government recognition of LGBTQ people is "the greatest sham since the inception of American jurisprudence," and the proposition that there "are no ex-blacks but there are thousands of ex-gays."

HB 2320, if it were to become law, would designate all existing marriages between same-sex spouses "parody marriages" that "erode community standards of decency." It also would place LGBTQ people in the same class of people who practice bestiality.

In an obvious violation of the First Amendment, the bill would strip away the religious rights of LGBTQ people by declaring they are all Secular Humanists.

The assertions in the lengthy, 8-page bill are extreme, and reveal a basis in anti-LGBTQ hate from "persecuted Christians," according to the text of the bill.

"The sworn testimonies of ex-gays, medical experts, persecuted Christians and licensed ministers demonstrate that there is no real proof that a gay gene exists," begins one passage. It adds that "the idea that sexual orientation is predicated on immutability is not proven," and "sexual orientation is a mythology, dogma, doctrine or orthodoxy that is inseparably linked to the religion of secular humanism."

Another passage falsely suggests the LGBTQ community is so well "organized" there is a "daily code" its members observe. Daily KOS says the bill implies "LGBTQ is actually a secret society."

"The lesbian, gay, bisexual, transgender and questioning (LGBTQ) community is organized, full and has a daily code by which members may guide their daily lives, which makes it a denominational sect that is inseparably part of the religion of secular humanism."

To be clear, that is false.

"Instead of having a cross, the ten commandments icon, or star and crescent, the LGBTQ secular humanist community has the gay pride rainbow colored flag to symbolize its faith-based worldview," the bill also claims. That, too, is false.

The lawmakers also attack the popular phrase, "love is love," declaring that "when a secular humanist says that 'love is love,' what they really mean is that they are amenable to government assets being used to oppress and marginalize anyone who disagrees with their beliefs."

LGBTQ people, the bill claims, seek "to infiltrate public schools and public libraries with the intent to indoctrinate and proselytize minors to their religious worldview on faith, morality, sex and marriage with the government's stamp of approval."

The lawmakers who penned HB 2320 perversely point to "the civil rights movement lead by Dr. Martin Luther King Jr." to support their false claims, ignoring the fact that Coretta Scott King has repeatedly said her husband would have supported the LGBTQ civil rights movement.

Garber is the bill’s lead sponsor, and says LGBTQ people are "trying to force their beliefs on society."

The Wichita Eagle notes the legislation "comes just months after voters elected the state’s first openly gay lawmakers and less than two weeks after the introduction of a bill that would prohibit discrimination against LGBT individuals statewide."

Tom Witt, the head of Equality Kansas, calls the bill the “most vile, hateful and disrespectful legislation” he's ever seen.