Jon Stewart demands Congress 'step up' for 9/11 heroes: 'This is a national embarrassment and crisis' 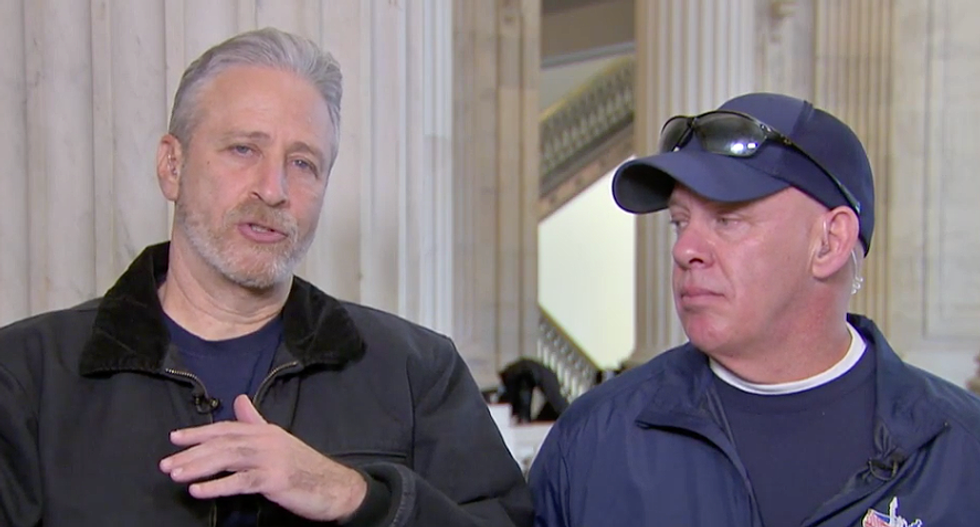 Seventeen years have passed since the al-Qaeda terrorist attacks on the World Trade Center in New York City and the Pentagon in Washington, D.C. The area of Lower Manhattan around the World Trade Center has been described as Ground Zero because that was where al-Qaeda inflicted the greatest harm, and after all these years, 9/11 first responders continue to suffer from chronic illnesses—which is why comedian Jon Stewart is visiting Washington, D.C. today.

In a February 25 article for the New York Daily News, Stewart (who hosted “The Daily Show” on Comedy Central from 1999-2015) explains that in the nation’s capital, “First responders, firefighters, police, construction workers, Red Cross volunteers, transit workers, FBI agents and school teachers are going door to door, down marble-lined hallways, because 17 years after the attacks on 9/11, injured and ill responders, survivors and their families are still dealing with the impact of the toxins at Ground Zero.”

Stewart finds it appalling that the September 11th Victim Compensation Fund (VCF) is being underfunded in 2019.

“Last week,” Stewart notes, “the Justice Department announced that because of a lack of funding, the September 11th Victim Compensation Fund (VCF) will need to make severe cuts of between 50% and 70% on pending compensation awards for injuries caused by the toxins. This will impact thousands of 9/11 responders, survivors and their families who have been waiting years for help.”

In his article, Stewart endorses a bipartisan bill in Congress he says “fully funds the VCF.” The bill’s sponsors range from prominent Democrats (including Sen. Kirsten Gillibrand and Senate Minority Leader Chuck Schumer) to Republicans who include Sen. Cory Gardner of Colorado and Rep. Peter King.

The bill, according to Stewart, “reverses the cuts in awards and keeps the fund open to deal with those that have yet to be impacted by the toxins at Ground Zero.”

Stewart goes on to say that the number of number of 9/11 first responders battling illnesses has continued to increase.

“The number of those coming forward with illnesses and cancers related to the toxins at Ground Zero grows every single day,” Stewart writes. “In the World Trade Center Health Program, 45,000 people are suffering from at least one 9/11-related chronic health condition. More than 10,000 have been certified with a 9/11-related cancer, with more being diagnosed every day. And almost every other day, another 9/11 responder or survivor dies from a 9/11-associated cancer.”